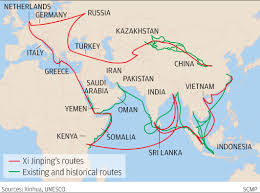 The Silk Road Economic Belt and the 21st-century Maritime Silk Road, also known as One Belt, One Road proposed by China has been hailed as a landmark development in increasing connectivity and cooperation among countries of Europe and Asia. Nepal and China have also signed agreement to promote the initiative jointly. What are its prospects for Nepal and how can Nepal benefit from it? APD had approached Hari Bhakta Sharma, senior Vice-President of Confederation of Nepalese Industries (CNI), Suraj Vaidya, former President of Federation of Nepalese Chambers of Commerce and Industry (FNCCI), Rabi Bhakta Shrestha, another former President of FNCCI and Rajesh Kaji Shrestha President, Nepal Chamber of Commerce and President of Nepal-China Chamber of Commerce and Industry for their insights. Excerpts:

How do you view Nepal-China agreement to promote One Belt, One Road initiative?

Suraj Vaidya: China and India are emerging as the largest economies. As a country that lies between the two countries, Nepal should take benefit from both. Connectivity is important for this. This is what China’s One Belt, One Road vision actually stands for. Bilateral trade between China and India is going to top $200 billion in the next few years. Development of infrastructure in Nepal under the One Belt, One Road could help this bilateral trade to happen through Nepal. Which will ultimately benefit Nepal’s economy.

Rabi Bhakta Shrestha: This is a very good initiative because enhanced connectivity is a must to improve environment for doing business in Nepal. Enhanced connectivity to be brought by this initiative will bring down transport costs for both export and import transactions for Nepal. Nepal’s lengthy shipment cost has eroded our competitiveness in the global market. If the proposal sees the light of the day, it will greatly reduce Nepal’s shipment costs.

Rajesh Kaji Shrestha: Chinese President Xi Jinping introduced this concept in 2013. It aims to connect Asia and Europe by both road and the sea. It is very important for Nepal to become a part of this grand vision as it can ensure that Nepal will become a transit country between the two large economies. This can link Nepal with China, India and Bangladesh and as far as Gulf countries and Europe.

What has Nepal done so far to contribute to this noble initiative?

Hari Bhakta Sharma:It has not done much so far. Nepal should develop its road and railway in much better way than now.  We cannot attract foreign investment if our infrastructures continue to remain poor while they are in advanced stage in China and India. The recent blockade also showed the inadequacy of our current infrastructure. Railway and highway connecting both India and China should be developed side by side.

Suraj Vaidya: There has been little effort from government’s side to promote One Belt, One Road vision. Though there has been much noise about the need for integration, the government of Nepal does not seem to be serious enough not only to enhance connectivity with China but also among other South Asian countries. Nepali people would not have to suffer from Indian blockade if our government’s focus had been on enhancing connectivity with other countries.

Rabi Bhakta Shrestha: It does not seem to have done anything. Much talked about Kathmandu-Nijgadh Fast Track Project has once again failed to move ahead.  It could be one of the important parts of enhancing connectivity with India. One could reach Nepal-India border point of Birgunj within an hour of travel from Kathmandu through this road. It would be a great relief from several hours that we have to spend to reach that town through the existing road system.  Likewise, we should have increased road connectivity towards China border as well. There has not been significant progress on this front. Dependence on one single country renders a country vulnerable. The recent blockade has proved it. One Belt, One Road could drastically reduce or dependency on one single country. Nepal should realize this and contribute to this great initiative from whichever way it can.

Rajesh Kaji Shrestha: I don’t know what the government is doing but as far as private sector is concerned, Nepal China Chamber of Commerce and Industry (NCCI), which I head, is a member of Silk Road Entrepreneurs Council of China. We will forward our vision about how Nepal can become an important part of this initiative. We have also set up a Silk Road Committee under the NCCI. The committee will promote this vision in Nepal and take necessary steps for implementation.

How can Nepal benefit from this vision?

Hari Bhakta Sharma: Tourism is one such sector that Nepal can take the most benefit from once the infrastructure is developed in line with One Belt, Old Road vision. It will also facilitate trade and investments here.

Suraj Vaidya: Nepal can attract investment in industries and infrastructure building by taking advantage of its geostrategic location between China and India. Currently, as Chinese economy is slowing down, increasing number of Chinese companies are looking to invest outside of China. Nepal can be a potential destination for such investment once necessary infrastructures are developed here.

Rabi Bhakta Shrestha: The enhanced connectivity to be ensured by the revival of ancient Silk Road will help promote Nepal’s tourism. Chinese tourists have been visiting foreign countries in several millions of numbers. We can bring them here in several times higher number than current arrivals. This will also help to increase setting up manufacturing base here as we can export and import goods from here to both Chinese and Indian markets.

Rajesh Kaji Shrestha: Implementation of One Belt, One Road will greatly contribute to reduce the time and cost of Nepal’s international trade. As a landlocked country with poor infrastructure, Nepal’s cost of trade is higher compared to other countries. The other benefit is increased connectivity by land will bring more tourists to Nepal and it will boost our tourism industry.

Nepal is a founding member of Asian Infrastructure Development Bank. China has also set up Silk Road Fund. How do you see these institutions helping in building ‘New Nepal’?

Hari Bhakta Sharma: These institutions have offered big opportunities for Nepal’s financing needs to improve its poor infrastructure. But our capacity to spend the available resources is dismal. Nepal has a poor track record on this front. This should be corrected.

Suraj Vaidya: There won’t be any problem in receiving funding from both AIIB and Silk Road Fund. Question is about our capacity to spend. The donors had committed US$4.1 billion for Nepal’s post-earthquake reconstruction in June 2015. But there has been zero spending so far.

Rabi Bhakta Shrestha: AIIB was opened for funding of infrastructure. So it could be a good source of funding for Nepal where our status of infrastructure is very poor. There is definitely more scope for getting more resources from these institutions. But the biggest problem of the country is its weak spending capacity. It has not improved for the last several years.

Rajesh Kaji Shrestha: These are two important sources of funding to improve  Nepal’s poor infrastructure. The fund from these sources can be used for road and railway infrastructure development to enhance Nepal’s connectivity.

More and more Chinese investors are likely to come to Nepal. What do you think can be done to help them overcome language barrier and cultural gap?

Hari Bhakta Sharma: I don’t think language and cultural barriers are any big obstacles to attract Chinese investments in Nepal. An investor can use translators for the purpose. The way I see it, inconsistent government policies and political instability are much bigger hurdles.

Chinese government has been encouraging its investors to make investment in various countries. Along with its economic growth, Chinese government and private sector have developed huge capability but Nepal has failed to utilize this opportunity. It should not. Even despite its distance from China, Sri Lanka has attracted much bigger investments from China than Nepal.

Suraj Vaidya: As a receiving country of foreign investment from China, it is Nepal’s responsibility to help interested Chinese investors to overcome linguistic and cultural barriers. Learning Chinese language has been made compulsory in schools in many countries of the world. Thailand has given top priority to teaching of Chinese language so as to attract more Chinese tourists. China has become the largest source market for global tourism. We can adopt similar approaches for learning and teaching of Chinese language in Nepal.

Rabi Bhakta Shrestha: This problem is there. Language remains a major problem in dealing with Chinese investors. We have no such problem with Indian investors because we hardly have any difficulty in speaking Hindi. The language barrier with China must be broken. We need to set up and promote Chinese language institutes in Nepal. Chinese language should also be taught in schools.

Rajesh Kaji Shrestha: Big Chinese investments have not been realized yet despite commitments. Small investments are coming in more numbers.  If trade and investment are promoted between the two countries, the language and cultural barriers won’t be any big problem. Language is no barrier to trade.

What could be major infrastructure projects that Nepal could develop under One Belt, One Road initiative?

Hari Bhakta Sharma: Chinese government has been encouraging its investors to make investment in various countries. Along with its economic growth, Chinese government and private sector have developed huge capability but Nepal has failed to utilize this opportunity. It should not. Even despite its distance from China, Sri Lanka has attracted much bigger investments from China than Nepal. With proper infrastructure we could improve our business with China.

Suraj Vaidya: We have to develop the fast track projects connecting with both China and India borders. Much talked about Kathmandu-Nijgadh Fast Track in South and another Fast Track connecting Kathmandu to Nepal-China border could be developed as part of One Belt, One Road. We also need to complete under-the-construction North-South Highways.

Rabi Bhakta Shrestha: We have to complete the North-South Roads as soon as possible. We can get funding for this from One Belt, One Road initiative. With China already announcing its plan to connect Kerung with railway, we also have to make efforts to connect Chinese border with electric railway if availability of resources permits.

Rajesh Kaji Shrestha:  China is soon connecting Nepal border with its railway. There has been talk about  extending it to not only up to Kathmandu but also Lumbini. This will be a milestone project under One Belt, One Road.

(This article was originally published in Asia Pacific Daily, Kathmandu issue in Feb. 2016)