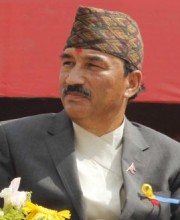 KATHMANDU, March 9 (Nepal Foreign Affairs)–Deputy Prime Minister and Minister for Foreign Affairs Kamal Thapa has left Kathmandu for Thailand on Wednesday to attend the 14th Ministerial Meeting of the ACD as the Guest of the Chair, which is being held in Bangkok on Wednesday and Thursday.

Thapa is leading a six-member delegation of Nepal to the meeting.  The minister is visiting at the invitation of  Foreign Minister of Thailand Don Pramudwinai who is the current Chair of the Asia Cooperation Dialogue (ACD).

ACD was established in Thailand in June 2002 with the main objectives of promoting interdependence among Asian countries in all areas of cooperation; expanding trade and financial market within Asia and enhancing Asia’s economic competitiveness in the global market; and,ultimately, transforming the Asian continent into an Asian Community.

Currently, the regional body has 33 members from across Asia. The Nepalese delegation led by Thapa comprises Ambassador of Nepal to Thailand Khaga Nath Adhikari, Joint Secretary of the Ministry of Foreign Affairs Mani Prasad Bhattarai, and other government officials from the Ministry of Foreign Affairs and the Embassy of Nepal to the Kingdom of Thailand.

Minister Thapa will leave Bangkok for New Delhi on March 10 to attend the World Culture Festival as the Guest of Honour. The Festival is being organized by the Art of Living International Centre. Minister Thapa is scheduled to return to Kathmandu on March 12.