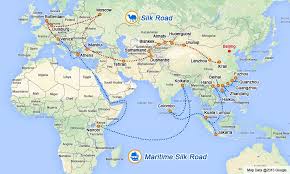 BEIJING, May 12 (Xinhua) — Around 2,000 years ago, merchants and caravans began moving east and west along the Silk Road, trading goods and technology. Now a modern Silk Road, rekindling trade, attracting investment and sharing prosperity, is in the making.

The Belt and Road Initiative has gained enormous traction since it was proposed by China in 2013. It consists of the Silk Road Economic Belt and the 21st-Century Maritime Silk Road, aiming to build a trade and infrastructure network connecting Asia with Europe and Africa along, and beyond, the ancient trade routes.

The Belt and Road Forum for International Cooperation, the highest-level international meeting so far for the initiative, will be held in Beijing on Sunday and Monday, attracting 29 heads of state and government leaders.

“The main structure of a modern Silk Road has roughly taken shape, through better links between cities along the routes, trade zones, international economic corridors and better ports,” said Xiang.

More than 100 countries and international organizations support the initiative. China has signed agreements with at least 40 of them.

China has invested more than 50 billion U.S. dollars in countries involved from 2014 to 2016, official data show.

“The new Silk Road is by no means a private path for China. Rather, it is a grand avenue that accommodates the prosperity of many nations,” said Fang Aiqing, vice commerce minister of China.

When the global economy is troubled by weak growth, weak demand with financial fluctuations lurking round each corner, the Belt and Road Initiative, which targets growth and rebalancing the global economy, is a desirable solution, he said.

“Most countries along the Belt and Road are developing nations and eager for better economic performance and regional economic integration,” Fang said.

China’s initiative docks with the individual development strategies of different countries, such as Australia, Cambodia, Kazakhstan, Poland, Turkey and Vietnam. Railways, ports, oil pipelines and other infrastructure have been built. Cultural, educational, tourism and archaeological exchanges are ongoing.

The Thai-China Industrial Park in Rayong, located some 200 km from Bangkok, is one of the most successful economic zones. It hosts about 90 companies and provides jobs for 20,000 locals.

“We bring advanced technology to local users,” said Wang Jianyi, chairman of Chinese optical cable provider Futong Group, which has a plant in the industrial park.

The China-Europe container trains ship goods like laptops, ceramics and oil-drilling equipment to Europe and bring back such things as food, wine and baby formula.

A growing number of companies, both Chinese and foreign, ship their goods through the railway network from cities like Chengdu and Chongqing in China.

“Transportation connectivity is the foundation of the Belt and Road Initiative,” said Wu Chungeng of the Ministry of Transport.

China has signed more than 130 bilateral and regional transport agreements, he said.

About 1,300 years ago, thousands of retailers and traders gathered at the west and east markets in today’s Xi’an, capital of northwest China’s Shaanxi Province. These markets were well known along the ancient Silk Road.

“People brought silk and tea here and took them further on west to the Middle East and Europe. The caravans brought back pepper and cloves,” said Wang Bin, curator of the Tang Dynasty (618-907) West Market Museum.

“When the market thrived, it was a time of prosperity and good lives for the people. The west market lasted 320 years before it shrank at the end of the Tang Dynasty,” he said.

Under the Belt and Road Initiative, rail services are expanding in Xi’an, and a free trade zone has been set up.

“The ancient Silk Road turned post houses and small oases into great cities, and allowed exchange among the world’s greatest civilizations,” said He Lifeng, head of the National Development and Reform Commission.

“We need to remember that when the ancient road was in its prime, China was a rather open nation. Through the Belt and Road Initiative, China aims for further opening-up and common prosperity,” he said.

“History can be silent but it never disappears, and it is time to recall past experiences to shape the future,” he added.

Global economic recovery in the past few years has been hard and circuitous. International trade and investment are slow, and globalization has met immense challenges.

“Faced with the challenges, we need to draw wisdom from our ancestors and take action to break the stalemate,” said the official.

Gubaz Sanikidze, former deputy chairman of the parliament of Georgia, hailed the Belt and Road Initiative as a great modern Silk Road.

“It represents new opportunities and prospects and to some extent, the future of the globe,” said Sanikidze, suggesting security issues in some areas need to be considered when the initiative is implemented.

ALL ABOARD THE TECH TRAIN

Chinese companies have increased their investment in countries along the routes, building overseas technological centers and manufacturing bases.

The company plans to invest 150 million dollars in a water pollution treatment program in Oman.

“We will pour more investment in Belt and Road countries for deeper cooperation,” said He Yuanping, vice president of Beijing OriginWater.

Belt and Road countries need technology. There is a huge potential for cooperation between China’s tech parks and those countries, according to the Zhongguancun administration.

Since 2014, Tus-Holdings, based in Beijing, has trained managers and planned industrial parks for countries such as Egypt, Malaysia, Mongolia, Pakistan, Russia and Thailand.