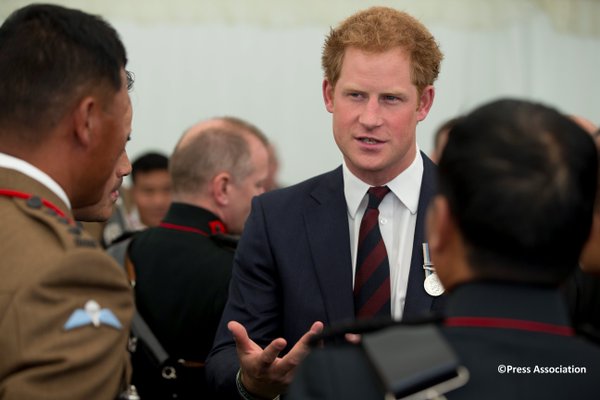 Wednesday 23rd March, 2016 A speech by Prince Harry at the British Embassy in Nepal

Namaste. Thank you Ambassador for your hospitality and for being such a great travelling companion these last five days. And thank you all for coming

here tonight to celebrate the 200 year partnership between the British and Nepalese people. It is a pleasure to be able to speak to you at the conclusion of my official tour of Nepal to celebrate this milestone.

At the start of this visit I said that I hoped to shine a spotlight on the resilience and resolve of the people of Nepal. Nearly a year on from the earthquakes that took so many lives, I wanted to pay my respects; but also I wanted to show that this country was open for business and has so much to offer. The people I have met on this journey have made this goal so easy. I met Purushottam Suwal, who is 15 years old. He is the chairperson of the community committee at Byasi camp where 80 families are living after losing their homes in last year’s earthquake. His energy and optimism was inspiring and I was left in no doubt why his community had picked him to lead them through such a difficult time. I would not be surprised if I meet him again on a future visit as Prime Minister.

Keep an eye out for him! I also met Mrs. Mangali Gurung Tamang, an 86 year old Ghurka widow living in the remote village of Leorani. She too had lost her home in the earthquake and had seen her family and community rally around her. She is being supported by the Ghurka Welfare Scheme who are building her a new home. Yesterday morning I visited the site of a school that was destroyed in Gauda and is now being rebuilt. The community was one of the most vibrant and joyous I have ever had the privilege to meet; there was no sense of defeatism. I saw a lesson in a makeshift classroom and even played a game of volleyball against the backdrop of the Himalayas before being covered in red paint to mark Holi – clearly not your standard day! What happened in this country a year ago was a tragic disaster. But the people I met showed me that everyone is focused on the work ahead.

I am tremendously proud that my country – through the Department for International Development and the generosity of so many people and organisations in the UK – are doing so much to support the Government and people of Nepal in your recovery. I hope that everyone back home who took an interest in the tour can see that Nepal is a country that you really have to come and visit. You have to come and see world heritage sites like Patan Durbar Square and be inspired by Nepal’s history. You have to come to see beautiful wildernesses like Bardia National Park. The work there is an example to the rest of the world of how the conservation battle can be won through the cooperation of communities, park staff and the military. This truly is a success story. You have to come and walk in the foothills of the Himalayas – watching the sunrise over those majestic mountains is something I will never forget.

But most of all you have to come to meet the people of Nepal. I have rarely in my life felt as welcomed as I have over the last few days. If anything I may have been a bit too welcome! This tika is here to stay! The people I have met and the beauty of this country make it very hard to leave. Thankfully however, I’m not leaving just yet! I will be spending the next six days in a remote village with a charity called Team Rubicon. The team I’m joining will be working with a community to rebuild a school damaged in the earthquake. I’m so grateful to have this opportunity at the end of my official tour to do my small bit to help this beautiful country. Thank you all for coming this evening. I can’t wait to see you all again over the years to come. Dhanyabaad