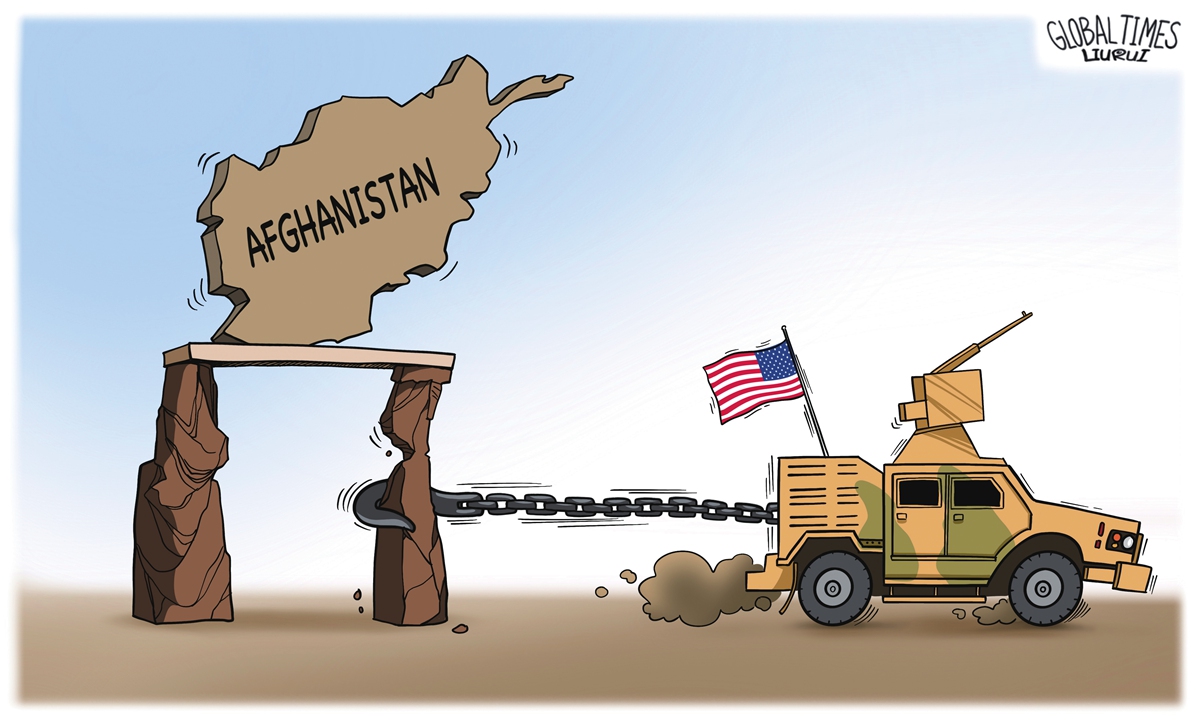 By Wang Jin (Global Times, 16 August 2021) – The situation in Afghanistan is undergoing great changes by the day, even by the hour. Just on Sunday, the Afghan interior minister announced that Kabul will shift power to a “transitional administration,” after the Taliban entered Kabul, the country’s capital city. Talks between the Afghan government and the Taliban over a peaceful transition of power are reportedly ongoing, while media reports said that Afghan President Ashraf Ghani has left the country bound for Tajikistan.

The Afghan forces are comprised of members from the Northern Alliance, a united military front that came to formation in late 1996 after the Islamic Emirate of Afghanistan took over Kabul. Despite numbering 350,000, they belong to different factions. The Americans were well aware of this, so they formed a special force that consisted of the most elite troops, but they numbered only around 10,000. Right now, without US assistance, the Afghan government bears a great financial burden. As the Taliban made a sweeping advancement, the Afghan government just had to accept defeat without fighting.

The US has fully misjudged the situation. Last month, when US President Joe Biden made remarks on the withdrawal of the US forces in Afghanistan, he said, “The Taliban is not the North Vietnamese army. They’re not remotely comparable in terms of capability. There’s going to be no circumstance where you see people being lifted off the roof of an embassy in the – of the United States from Afghanistan.” A few days ago, US military officials assessed that Kabul’s collapse could occur within 90 days, faster than originally anticipated. But now, Afghanistan and the rest of the world are witnessing a change of government in the war-torn country.

Such US misjudgment came as the US only calculated the “hard” conditions of Taliban and Afghan government forces such as the number of the troops and the population each of them controlled. But in reality, the rapidity of the Taliban’s victory at the beginning has greatly boosted the morale of the Taliban.

The US did reflect upon itself by realizing that intervening Afghanistan was a mistake. But such reflection did not prevent the US from making mistakes again and again. The US decided not to go further in Afghanistan by withdrawing its troops, but its decision generates only even more grave mistakes – bringing more security challenges to Afghanistan and the international community.

The entanglement as well as the withdrawal of the US troop was all strategically planned, both ultimately serving US interests. As US Secretary of State Antony Blink said on Sunday, “It’s simply not in our interests to remain in Afghanistan.”

Since former president Barack Obama, the US has been withdrawing from overseas missions such as Iraq. During Trump’s tenure, US allies were faced with an unpredictable president who relentlessly damaged the US alliance system. Although the incumbent Biden administration has been working hard to mend US allies’ trust toward it, the unfolding events in Afghanistan only prove that the Americans cannot be trusted – US protection is always absent when needed.

The author is an associate professor at the Institute of Middle Eastern Studies, Northwest University. [email protected]