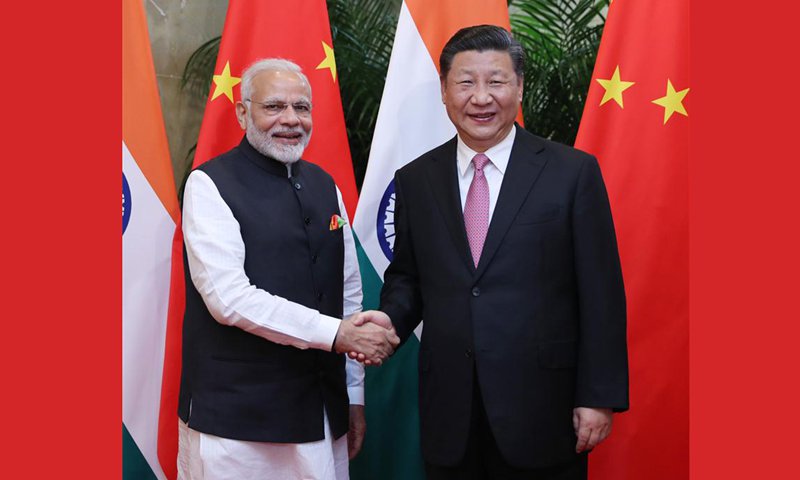 By Mao Keji (Global Times, 30 April 2018) – Basking in the spring breeze and sunshine, Indian Prime Minister Narendra Modi and Chinese President Xi Jinping took a stroll in Wuhan’s East Lake Park, Central China’s Hubei Province, on April 28. Meeting in private with no written notes and no pre-negotiated official statements or agenda other than a pre-determined mutual commitment to improve the Sino-Indian bilateral relationship, this lakeside walk epitomizes the spirit of an “informal” Sunnylands-style summit – intimacy and interactivity. No occasion was more ideal than this to restore communication, identify shared interests and chart a new course for the two countries.

However, given the depth and breadth of the issues between these the two Asian giants, it may be a good idea to conduct an in-depth assessment on both the promising and dismal side of the bilateral relationship. Before appending any high-sounding rhetoric to the summit, it is wise to keep calm. While the potential for betterment may be expected over time, the perennial existing issues may also defy any speedy and dramatic breakthroughs after all. Of course, the essence here is to agree to disagree and move on.

First and foremost, the border disputes have loomed largely. Because of the domestic politics arrangement and sheer size of the disputed area in question, a permanent border settlement seems remote. Large and thorny notwithstanding, these territorial disputes are not new at all. So, in the equation of Sino-Indian relations, they should be seen as a given constant, instead of a newly added variable. In other words, both governments may more patiently manage these disputes as an existing condition, rather than trying to hastily solve them.

Secondly, economic concerns regarding trade deficit, market access and infrastructure cooperation linger. The trade pattern between the two economic powerhouses are decided on by their domestic industrial structure and resources endowment. The Chinese economy is now about five times larger than India’s and China has made major inroads into industrialization. If India really wants to materialize its ambitious industrialization campaign – “Make in India” – then China is the most suitable facilitator. However, as tellingly demonstrated by China’s tremendous trade deficit to South Korea, later-comers’ trade deficits with their industrialization facilitators are often large and will not decrease soon. This is because of the huge demands for necessary components and machineries that later-comers cannot produce onshore. So, instead of fixating on trade, India may better improve its balance of payment through financial account surplus in forms of incoming foreign direct investments. This, of course, requires India to put the existing trade deficit in strategic perspectives, further liberalizing its domestic market.

Thirdly, India’s geostrategic concerns for the China-Pakistan Economic Corridor (CPEC) and other Chinese initiatives will persist. China has the right to cooperate with any other sovereign countries in the region, while India also has the right to like or dislike China’s initiatives in the region. But the bright side is that, instead of focusing too much on the CPEC, China and India can better align their interests by staging out regional initiatives that are paralleled to the CPEC. Among others, they may kick-start new initiatives like the China-Nepal-India Trilateral Corridor or revive the Bangladesh-China-India-Myanmar Corridor. The sub-continent is no one’s backyard – if the zero-sum mentality is done away with, a regional-wide improvement is attainable with China and India taking on the leadership for collective benefits of the region

Patience and strategic vision aside, deft diplomacy and exchange are for sure crucial. As illustrated in India’s prudence in addressing Beijing’s concerns over the Dalai Lama as well as Beijing’s endorsement of a specific anti-terrorist section in last year’s BRICS declaration, they could deal with each other’s sensitivity in a more attentive and effective manner. In contrast, the “megaphone” approach to air contentious issues with muscular rhetoric – be it India’s loud bid for Nuclear Suppliers Group membership or the demand for the proscription of Masood Azhar – were not constructive at all.

After all, China and India are not only the two most populated countries in the world, but also the fastest growing major economies. The incremental volumes each country adds to their own economy each year are tremendous, and the evolution and progress each country witnesses are remarkable. With such great changes, they should better seek the solution to the existing problems with the “incremental approach” – to resort to new initiatives and innovative mechanisms with newly added economic resources and political capital, rather than confining oneself to the limited resources currently at disposal. After all, problems popped up in the process of development should be addressed by carrying out more development.

The Asian Infrastructure Investment Bank (AIIB) is an excellent example of this “incremental approach.” The AIIB was newly initiated by China in 2015, but India has not only gained significant political capitals in the field of international finance by becoming the bank’s second-largest shareholder, but also has harvested considerable economic benefits as its largest loans recipient. As India has become an important member of the groupings China has major stakes in – the Shanghai Cooperation Organisation, BRICS and the AIIB –  such a multilaterally beneficial “pareto improvement” may well be attained through long-term strategic collaboration and deft diplomacy.

The author is a researcher with the Pangoal Institution. [email protected]