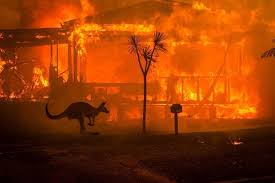 Global Times (8 January 2020) – Four months after Australia’s bushfires started burning, they have spread to an area larger than Denmark and killed at least 24 people. The air quality of cities such as Canberra, the capital, has deteriorated sharply. Many people lost their home in the fire.

Fires are first and foremost a common natural phenomenon in Australia. This year’s dry and rain-free climate has particularly contributed to the forest fires spread widely. There has been a lot of criticism in Australia about how little the government has done to bring the blazes under control.

In our view, this fire is too intense for the Australian government and society to deal with. In the past, Australia has had forest fires every year, but local governments have been able to control them with a conventional response. The country has no mechanism for dealing with super fires. Australia is sparsely populated, although most area of the country is desert but the per capita forest area is still very large. It is not very distressing if there is a local fire. As a result, the country has to an extent relaxed the vigilance.

Australia not only has a weak disaster prevention system, but also a limited ability to cope with calamities. Prime Minister Scott Morrison was widely criticized for taking his family on vacation to Hawaii during the fire. In fact, this reflects the country’s lax disaster response system. Most firefighters fighting the blazes are volunteers. The professional fire fighting team was seriously not enough to deal with the scale of the disaster. Unfortunately, the government did not urgently expand the mobilization capacity of professional firefighting teams at critical moments.

The nationwide fires could play a role in focusing Australia’s attention to the scourge. The Australian Liberal government has always had a negative attitude toward emission reductions. In recent years, it has particularly followed the Trump administration’s environmental policies and refused to contribute to the global emission reduction cause. Climate change is the obvious culprit.

Australia’s input in disaster prevention is too small. Countries around the world are constantly increasing their investment in technology and people to prevent bushfires. Preventative system is expensive. An emergency response system that can quickly mobilize enough expertise to respond to a disaster is also expensive. Australia is clearly failing badly at both levels.

As a developed country, Australia is not short of money, but has allocated too little funds for disaster prevention and mitigation. In recent years, national security has attracted too much attention from the Australian government and elite groups. In fact, some of their concerns, such as the “China threat”, are influenced by changes in the US strategy toward China and have consumed too much energy and resources.

It must be noted that natural disasters are at the top of the list of threats in most countries of the world today. As a country facing serious natural disaster threats and geopolitical risks, China dare not focus its national efforts in the latter direction and let problems in the former go unchecked. China’s economic development level is still not high enough, and disasters are still frequent. Disaster prevention and reduction has always been one of the Chinese government’s top daily concerns, and China has been making unremitting efforts in building relevant systems.

The nationwide bushfires in Australia offer a lesson for the world and are a wake-up call for the international community: Given the increasing convenience with which the world can connect and mobilize its forces, the world should explore a massive increase in the level of collaborative response to super-natural disasters. It is difficult for a country like Australia to respond to a national fire disaster all by itself. Previously, Brazil’s Amazon rainforest fires were equally prominent. How the world should join hands to deal with such a disaster crisis deserves serious discussion.