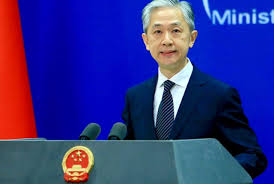 BEIJING, May 27, 2022 (AFP) – China’s foreign ministry on Friday accused US Secretary of State Antony Blinken of “smearing” the country after the American official delivered a speech calling for action to counterbalance Beijing’s influence.

China has faced a chorus of warnings from the United States and Western allies in recent days over its growing influence and global ambitions. In a wide-ranging speech on Thursday, Blinken warned of China’s “intent to reshape the international order”, and called for a defence of the global order.

He also accused Beijing of raising tensions over Taiwan — a self-ruled island China claims as part of its territory — and said Beijing has “cut off Taiwan’s relations with countries around the world and blocking it from participating in international organizations”. Wang on Friday said China “firmly opposed” Blinken’s speech, saying it showed Washington sought to “contain and suppress China’s development and maintain US hegemony and power”.