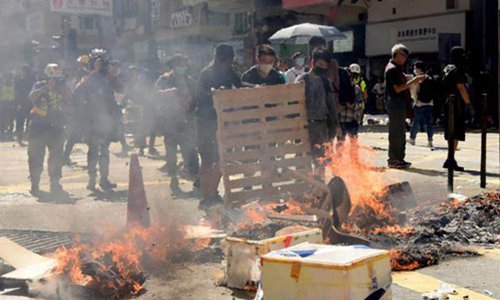 Global Times (13 November 2019) – Western media outlets have been reporting on the Hong Kong situation with bias in recent days. They are misleading the Western public’s understanding of the city’s situation, encouraging mobs, and fueling the riots in Hong Kong.

A Hong Kong police officer was besieged by several rioters on Monday, with one of them attempting to snatch his gun. The police had to shoot him after his warning ended in vain. Many Western media outlets, however, neglected the rioter’s obvious intention and behavior to snatch the gun. The Guardian even shamelessly cut off the rioter’s move to seize the gun in a video it released. Western media have jointly portrayed a false image of police “abuse of force.”

Is the real danger in Hong Kong the police’s “abuse of force?” The answer is apparently no. The true risk is that the situation is turning into a humanitarian disaster targeting an increasing number of innocent people.

Also on Monday, a 57-year-old male Hongkonger was set on fire for saying “We are all Chinese.” This is the epitome of such a humanitarian tragedy.

Multiple cases were seen on Monday where ordinary people were mauled in Hong Kong. It was shown in several videos that a young woman was beaten and humiliated by a group of black-clad rioters, a man was beaten up by several mobs, and a Japanese tourist was hit on the head. According to various sources, a passerby might be assaulted if he/she is suspected of taking pictures of protesters, expressing discontent with rioters who block the road, or even speaking Putonghua, the standard spoken Chinese.

On Tuesday, masked black-clad rioters occupied university campuses, including those of the City University of Hong Kong and the Chinese University of Hong Kong. Mainland students in those schools are under additional pressure and afraid of becoming targets. Some have already left their schools, and those still on campus are hiding in dormitories and planning to run away. As a matter of fact, the specific group has been purged in such a turbulent political situation.

Riots in Hong Kong are still developing. The above-mentioned sufferings of ordinary people, plus experiences of many tourism workers who have completely lost their income, point to a humanitarian disaster.

However, the Western media has deliberately ignored these horrible matters, or touched on them lightly. Instead, they keep hyping the use of live ammunition by Hong Kong police. Where is their conscience?

It’s clear that masked black-clad rioters are increasingly brutal while Hong Kong police remain restrained. Otherwise, would the rioters dare to be so rampant? Western reports on Hong Kong affairs have made the Chinese people see clearly how these media outlets put their standpoint ahead of objectivity without regard for professional ethics. Their reports on Hong Kong issues are disappointing.