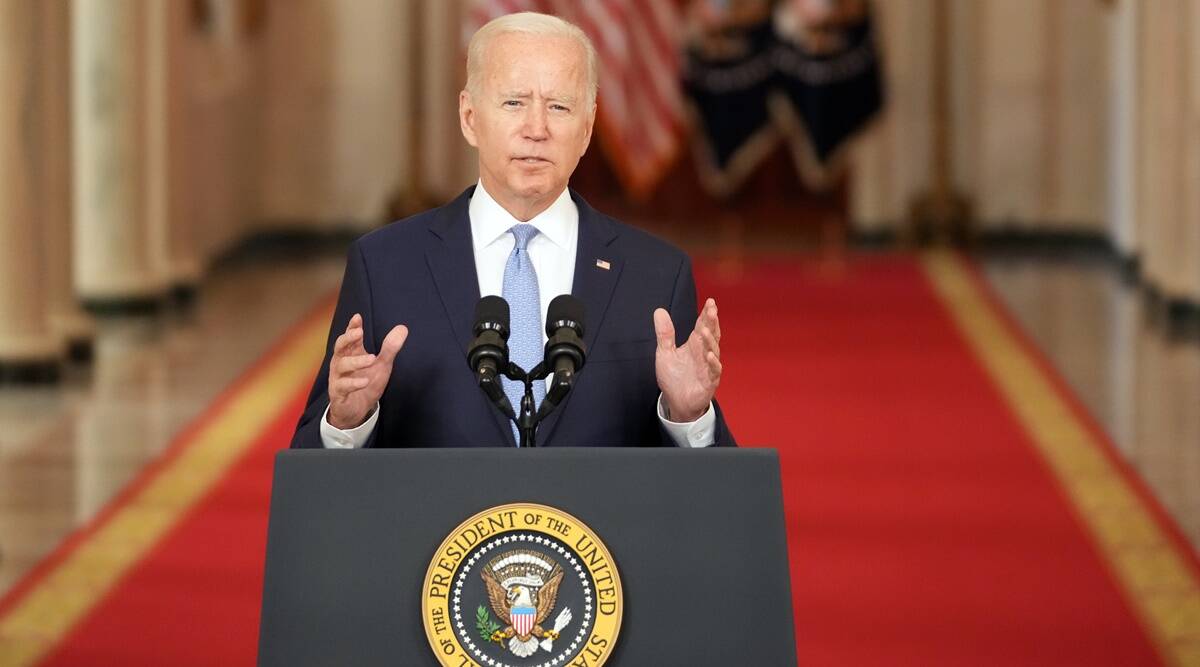 By Michael D. Shear and Jim Tankersley for New York Times (1 September 2021)  – President Joe Biden on Tuesday forcefully rejected criticism of his decision to end America’s 20-year war in Afghanistan, hailing what he called the “extraordinary success” of the evacuation of Kabul and declaring the end of an era in which the United States uses military power “to remake other countries.”

Speaking to the nation less than a week after a terrorist bombing killed 13 service members at the Kabul airport during a chaotic rush to leave the country, Biden said the costs to the United States would have been even higher if he had allowed the nation to remain mired for years in a civil war that has dragged on for decades. In blunt terms, he said the only alternative to the departure he oversaw was another escalation of the war.

“When I hear we could have, should have continued the so-called low-grade effort in Afghanistan, at low risk to our service members, at low cost,” Biden said in the 26-minute speech, “I don’t think enough people understand how much we’ve asked of the 1% of this country who put that uniform on.

“There’s nothing low grade or low risk or low cost about any war,” he continued. “It’s time to end the war in Afghanistan.”

The president delivered his remarks just shy of 20 years after the United States ousted the Taliban from power in the wake of the Sept. 11 attacks, and just a day after the last U.S. troops and diplomats departed the country, which is once again under Taliban rule.

Biden declared that he believed with “all of my heart” that he made a wise decision. But he appeared angry and defensive as he sought to counter a torrent of criticism from Democrats and Republicans — and from some families of the service members killed in Kabul last week — for his handling of the withdrawal.

The president refused to offer any sort of mea culpa Tuesday, even as the Taliban celebrated their “independence” from America with gunfire in the streets of Kabul.

Instead, the president sought to justify his handling of the final weeks of the war, saying the U.S. military and its diplomats deserved credit and thanks for ferrying out more than 120,000 Americans and Afghan allies in the face of the Taliban takeover and terrorist threats from ISIS-K, an affiliate of the Islamic State group.

Biden expressed deep remorse for the loss of lives in the explosions at the airport last Thursday, including scores of Afghans, but he dismissed the argument that his administration should have — or could have — conducted the final withdrawal in a “more orderly manner” by evacuating people earlier, before the Taliban takeover of the country was complete.

“I respectfully disagree,” Biden said, at one point pounding his finger on the lectern and delivering a sense of righteous indignation about the second-guessing from critics on Capitol Hill and others outside the administration.

President Joe Biden walks through Cross Hall to deliver remarks at the White House in Washington (Doug Mills/The New York Times)At the heart of Biden’s argument is a bet that Americans — a majority of whom say they support an end to the war — as well as historians will judge his decision to withdraw troops as the only acceptable one, given the situation on the ground when he came into office at the beginning of the year.

Withdrawing from Afghanistan was a central campaign promise, and White House officials believe that a majority of voters will reward the president for following through on what he said he would do.

Biden portrayed himself as a leader who took the only course available to him through a thicket of bad choices, laying blame on his presidential predecessor, Donald Trump, who reached an accord with the Taliban last year that committed the United States to fully withdraw by this past May, and the Afghan army. He said the United States had “no vital interest in Afghanistan other than to prevent an attack on America’s homeland” and that the war should have ended a decade earlier.

“That was the choice, the real choice between leaving or escalating,” Biden declared, his voice frequently rising to sort of an indoor shout. “I was not going to extend this forever war.”

In making that argument, Biden offered a glimpse of a different U.S. foreign policy in the post-9/11 world. He said he would shun ground wars with large troop deployments, favoring a strategy guided more by economic and cybersecurity competition with China and Russia and focused on countering threats with military technology that allows strikes against terrorists without having large contingents of troops based on the ground in a place like Afghanistan.

He called it a “new era” of the use of American power in which the United States would no longer seek to reshape its rivals in the way three previous presidents tried to do in Afghanistan and Iraq. He said that “the world is changing” and that U.S. leadership must change with it.

“As we turn the page on the foreign policy that has guided our nation the last two decades, we’ve got to learn from our mistakes,” he said.

He suggested two lessons: setting missions with “clear achievable goals” and staying focused on the fundamental national security interests of the United States.

Biden acknowledged that “about 100 to 200” Americans who want to leave Afghanistan were left behind when the final troops withdrew. But he said the United States would continue to make diplomatic efforts to help them leave in the days ahead.

“The bottom line,” he insisted, “is there is no evacuation from the end of a war that you can run without the kinds of complexities, challenges and threats we faced. None.”

And he downplayed the messiness of the U.S. exit from Afghanistan, offering assertions that critics say stretch the truth.

He said officials had always assumed that the Afghan national security forces would be a strong adversary to the Taliban. In fact, numerous intelligence assessments inside the government, as well as outside experts, had said for years that the Afghan forces were proving to be weak and ineffective.

He also boasted that his administration reached out “19 times” to Americans living in Afghanistan and offered them “multiple warnings” to leave the country as the Taliban approached. But he did not mention the numerous times his administration rejected advice from human rights groups, lawmakers and others to begin evacuations earlier.

Biden cast the country’s final departure from Afghanistan as a moral necessity, underscoring his refusal to sacrifice the lives of more U.S. service members to a war that has long since strayed from its original purpose. But the cost of that moral clarity was high, even at the end: 13 more service members lost as the United States raced to evacuate Americans and allies.

Biden said the nation owed a debt of gratitude to the troops who died in the evacuation mission.

“Thirteen heroes gave their lives,” he said. “We owe them and their families a debt of gratitude we can never repay, but we should never, ever, ever forget.”

This article originally appeared in The New York Times.