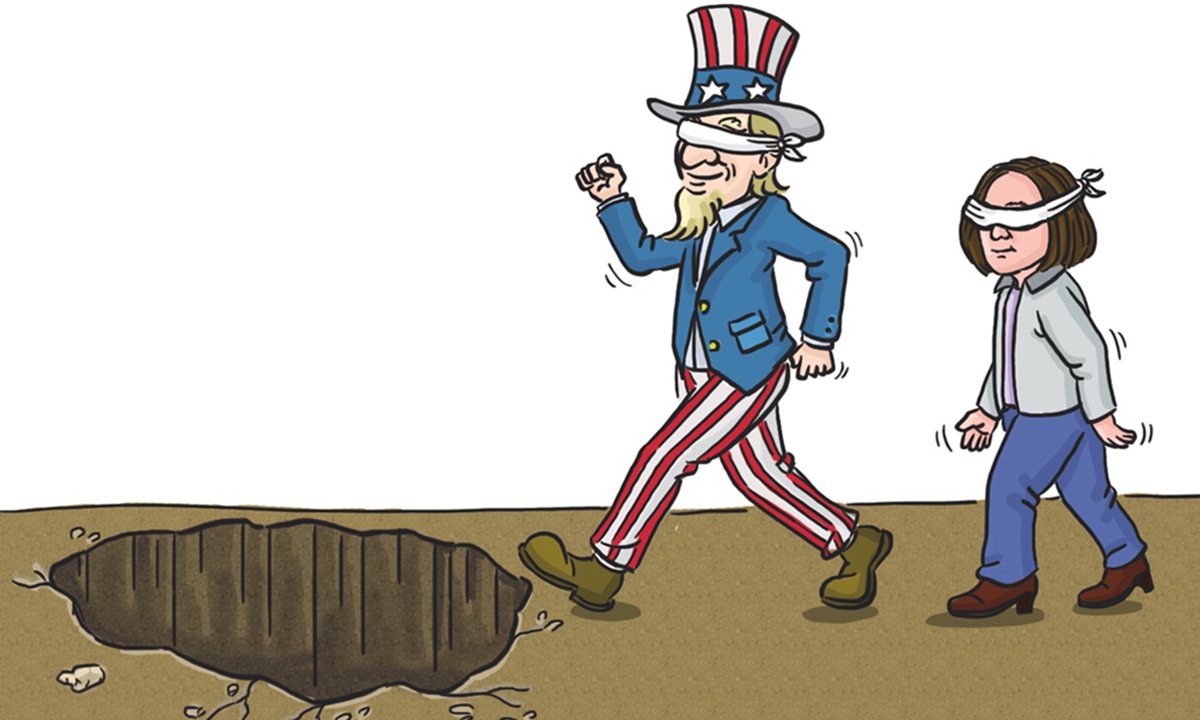 Global Times (22 October 2021) – In an interview with CNN on Thursday, US President Joe Biden was asked whether the US would protect Taiwan island if the Chinese mainland attacked. “Yes, we have a commitment to do that,” he answered. The interview quickly attracted eyeballs and interpretations.

As is known to all, the US has long held “strategic ambiguity” when it comes to the Taiwan question – not to make statements over whether to “defend” Taiwan island if the People’s Liberation Army (PLA) makes military moves to reach reunification across the Straits. If Biden’s answer implies that the US is giving up strategic ambiguity, and that US troops will fight the PLA if a war breaks out in the Straits, that would be a major shift in the cross-Straits situation and will be bound to trigger fierce confrontation.

In August this year, when Biden attempted to appease his allies after the US pullout from Afghanistan, he said, “We made a sacred commitment to Article Five that if in fact anyone were to invade or take action against our NATO allies, we would respond. Same with Japan, same with South Korea, same with – Taiwan.” The rhetoric caused chaos at that time. The White House soon put out the fire, indicating that US policy on the Taiwan Straits has not changed. US academic circles and mainstream public opinion mostly believe that Biden’ reply was “a slip of the tongue.”

After Biden’s interview with CNN on Thursday, a White House official clarified again the president’s comments on the Taiwan question, saying there is no change in the US’ Taiwan policy, stressing “the US defense relationship with Taiwan is guided by the Taiwan Relations Act.”

Biden’s words are not backed by basic US policy or laws. Even the Taiwan Relations Act and Six Assurances do not include content on US commitment to send troops to defend the island. They only touch upon weapons sales to the Taiwan island, helping to enhance the island’s defense capability. US diplomats could explain Biden’s rhetoric as “a slip of the tongue.” Since Biden often speaks incautiously, many people may also think that way.

Taking his answer literally, Biden’s statement did break the previous US stance on Taiwan island. It created room for imagination that the Biden administration might be hatching a strategic change on the Taiwan question. Taiwan secessionist forces may be encouraged through his words and further stir up trouble by taking advantage of this statement, misleading the people on the island.

Whether it is a slip of the tongue, such a statement will not influence the Chinese mainland’s determination and will over its stance on cross-Straits ties. US strategic ambiguity over the case may have been its tactic in the early years, but it is now becoming a forced choice to make without other alternatives in the face of reality.

The military strength between the two sides of the Straits used to be relatively balanced in the past. The US had advantages, and its strategic ambiguity was out of its diplomatic need toward China. But now, the PLA has an overwhelming advantage over the military on Taiwan island, with full capacity to cause unbearable results to US troops if they dare “defend” the island, and even to wipe them out. Only by sticking to the strategic ambiguity can the US maintain its position now, avoiding the scenario of either retreating or being involved in a war.

Over the past two years, some Americans wanted the US to abandon the strategic ambiguity policy and replace it with “strategic clarity.” Their voices cannot be compared to those who clamor about human rights, which are far more violent and arrogant. In terms of the Taiwan question, US political circles and public opinion are generally cautious. They hold a negative and fearful attitude toward turning a fight with the PLA into a US obligation.

Biden does not have the political authority to announce that the US military will “defend Taiwan” when a war breaks out, nor does he have the confidence to have a strategic collision with the Chinese mainland in the Taiwan Straits to support Taiwan secessionists until a desperate fight erupts, and make the Americans bear the risk of a bottomless war for Taiwan island. So, even if he dared to make a slip of the tongue, he would dare not really think so from the bottom of his heart.

Achieving peaceful reunification is a long-term policy of the Chinese mainland, but to deal with “Taiwan secessionists,” we could resort to any means, including using force to punish them. Seeking “independence” and resisting reunification by military means is a dead end. And any move supporting “Taiwan secessionists” is a hostile act against China. Obviously, even for the US, it cannot make such an act recklessly.