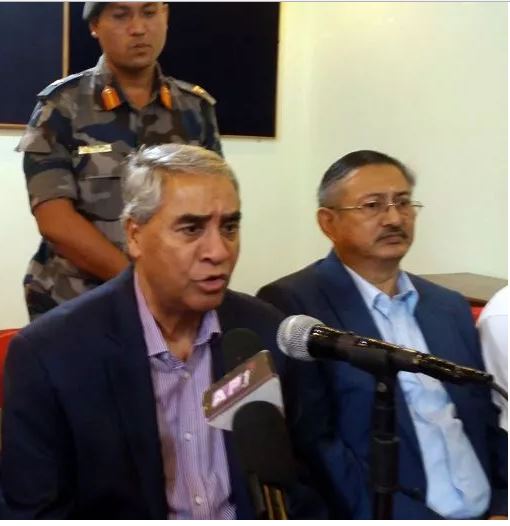 Nepal Foreign Affairs (CHITWAN, 13 September 2018) – Nepali Congress (NC) President Sher Bahadur Deuba has said the recent fourth BIMSTEC (Bay of Bengal Initiative for Multi- Sectoral Economic and Technical Cooperation) Summit was concluded successfully.
Taking part in an interaction programme organised by the Nepal Press Union (NPU) Chitwan here today, leader Deuba termed the event that Nepal hosted on August 30-31 in Kathmandu successful. He expressed his hope that it would further help promote the feelings of mutual goodwill among the member States in the days ahead.The former Prime Minister was of the view that the importance of SAARC had not gone down due to BIMSTEC. “SAARC has its own significance and values.”
The Summit’s decision to hold joint military exercise should be executed on the basis of consensus, he added.
The president of the main opposition argued that the Penal code that came into force from August 17 could be revised as per the people’s call.
He further went on to say that there should be no restriction on press. The belief was that the press must be free. He took the time to advise the government to work by realizing the public sentiments.
“Cases of violence against women are growing nationwide,” he said, adding that the government failure to find out perpetrator(s) in the rape and murder of a 13-year-old girl in Kanchanpur remained as its weakness. As he said, increase in the taxation at local-levels is unscientific and tax rates there should be lowered. —