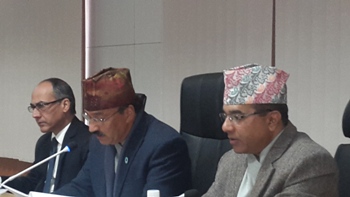 Ever since my appointment as Deputy Prime Minister and Minister for Foreign Affairs of Nepal, I was looking for an appropriate opportunity to talk to you about current political situation in Nepal as well as the foreign policy orientation of the new government. However, owing to other pressing priorities, it took me quite some time to coordinate this meeting to discuss issues and to get feedback.

I would like to share my thoughts on some current issues that I deem important for sharing with you.

I would like to begin with the promulgation of the constitution and the political situation in the country.

Nearly four months have passed since the promulgation of the new constitution, which the then President issued on September 20, 2015. The statute was approved by an overwhelming majority of the members of the then Constituent Assembly.

Let me remind you that the progress of the country was stalled due to ten years of armed conflict and eight years of painful transitional phase delaying Nepal’s developmental journey for economic growth and prosperity. As such, there was no alternative (than to adopt the constitution) to logically conclude the peace process that began in 2006.

Now, I am pleased to share that the implementation phase has already begun. At this juncture, I would like to express my sincere thanks to all of you and the international community for continued support and goodwill extended for the successful conclusion of the peace process and the promulgation of the constitution. I am also confident of receiving your continued support which is crucial for the implementation of this constitution.

It would be far from reality to presume that a constitution of any particular country on this globe is perfect. But to judge by any fair standard, Nepal’s new constitution encompasses the main features of a democratic and inclusive polity. Commitment has been expressed in the very Preamble to democratic norms and values, civil liberty, fundamental freedoms, human rights, adult franchise, periodic elections, complete press freedom and an independent, impartial and competent judiciary, and the rule of law.

Under the right to social justice, it has been stipulated that socially backward groups and communities shall have the right to employment in state structures and public service on the basis of the principle of inclusion.

Separate Dalit, Indigenous, Madehsi, Tharu and Muslim Commissions have also been provisioned in this constitution to protect rights and welfare of the respective communities. As a concrete step towards inclusive state structure, the constitution provides that while conducting election of the president and vice-president, the election shall be held so as to represent different gender or communities. Likewise, while electing the speaker and deputy speaker, either speaker or deputy speaker shall be a woman and the two shall belong to different parties.

You are well aware of the fact that both the newly elected President of the country and Speaker of the Lower House are female.

It is evident that a new chapter has begun in the history of the country. However, at the same time, a few political parties, especially Madhes-based political parties, have expressed discontent over some of the provisions of the new statute.

What I would like to emphasize is that the Government of Nepal has made it clear time and again that, as this constitution is dynamic in true sense, genuine concerns of agitating parties can and will be addressed through dialogue and the genuine demands will be accommodated in the constitution as required.

It was in line with this spirit that the present government, immediately after its formation, had formed a talk team, which I myself am heading, to hold dialogue with Madhes-based political parties. The team concluded many rounds of dialogue with the agitating leaders. Now, as the result of those dialogues and similar other high-level discussions, the Government, in response to the demands of agitating parties, has tabled an amendment bill to the Constitution. The proposed amendments aim at addressing the demands of proportional inclusiveness in state organs and delineation of the electoral constituency on the basis of population while maintaining at least one seat in each geographical district.

With regard to the demarcation of provinces, it has been agreed that a high level mechanism including representatives of major political parties and agitating parties will be formed which will submit its report within three months. The Government is hopeful that the problems would be resolved soon once and for all. In this regard, we take the statement of the Government of India on this amendment proposal as an encouraging and positive gesture.

The regular supply of commodities that entered the country via the southern border check points has been disrupted following the constitution-promulgation, as it is known to all. However, the supply situation is now gradually improving. I have been informed that all other border check-points, except Raxaul-Birgunj, are now operational.

Still, as Raxaul-Birgunj is the major point of entry of goods, the impact of the situation will linger as long as this point is not made fully operational. We have constantly been urging the agitating parties to stop the agitation at the border check-points.

The continued disruption of supplies, especially medicines, POL products, and food might lead to a humanitarian crisis. We have conveyed this concern in our constant discussions with the relevant authorities of the Government of India. I hope the supply situation will come back to normal with resumption of all border check-points within a few days.

Now let me briefly touch on the Foreign Policy orientation of the new Government.

The newly promulgated constitution provides that the international relations of Nepal shall be directed towards the protection of national interest by maintaining international relations on the basis of sovereign equality. The government is fully committed to further strengthen Nepal’s relations with neighbouring countries and all other friendly countries on the basis of the principles of the Charter of the United Nations, non-alignment, the principle of Panchasheel, international law and the values of world peace.

We pursue the policy of friendship with all and enmity with none. Our policies mirror our informed judgment and independent outlook. It was in pursuance with this commitment that I visited India and the People’s Republic of China where I had very fruitful discussions on matters of mutual interest with my counterparts and other high dignitaries. Both with India and the People’s Republic of China understanding has been developed for the long-term economic relations based on mutual benefits. I also recall my recent meeting with Secretary of State and other dignitaries of the United Kingdom during my visit to London last month. Similar other visits at different levels are being worked out. The Government will continue its active engagement with the international community in the days ahead.

Nepal continues to give high importance to the role of the United Nations in the maintenance of international peace and security through peacekeeping missions. We remain steadfast in our commitment to support the UN through this flagship activity. We continue to attach unflinching commitment to the fundamental freedoms and human rights. Likewise, we continue to strongly condemn terrorism in all its forms and manifestations. Nepal will actively work with international community in advancing global development agenda, taking into account the special needs and concerns of LDCs and LLDCs

Development diplomacy is an important aspect of Nepal’s foreign policy. We have set a goal of graduating from LDC status by 2022. This goal must be met with our national determination and the concomitant support of the international community. I understand that every one of you present here have a strong commitment to support Nepal in its development drive through a variety of means, development aid, trade, tourism, investment, transfer of technology to name a few. We remain fully committed to expanding economic and commercial relations with your countries for mutual benefits. We will revitalize our bilateral, regional and multilateral presence towards these ends.

I am also pleased to share that the Ministry is working on establishing a mechanism for substantive dialogue with Kathmandu-based diplomatic missions on a regular basis. The Ministry has also begun its homework for the appointment of Nepalese Ambassadors.

With the promulgation of the constitution, we feel that the country is on the right track of peace, democracy and development. Our days ahead, however, are not easy. Political achievements are yet to be underpinned by economic prosperity. The responsibility of socio-economic transformation of the nation and establishment of a just and prosperous society is yet to be realized.

Nepal is well positioned to reap benefits from unprecedented economic transformation taking place in our neighbourhood and the region. With political issues now resolved, Nepal looks forward to receiving an enhanced flow of investment in the country. We remain firmly committed to further improving conducive climate with a view to bringing more investment. We need your concrete support in encouraging your private sectors to invest in productive sectors in Nepal.

You all are aware that the Nepalese economy has been suffering from more than a decade of internal conflicts and a long political transition. It was further crippled by the earthquakes that struck the country in April last year. And, now, with the disruption in the supplies, the economy has further suffered. The ordinary life has come to a standstill.

Against this background, the Government has made the economic development of the country as its priority agenda. The Government is serious about the reconstruction of the infrastructures, both public and private, damaged by the earthquakes. I am pleased to share that with the passage of the Reconstruction Authority Act by the Legislature-Parliament and the appointment of the Chief Executive Officer, the Authority has begun its work. While appreciating the generous support received from our neighbours, development partners as well as other friendly countries for the relief, rehabilitation, and reconstruction, we request for more support for accomplishing the vital task of reconstruction.

It is quite evident that, for a country like Nepal with limited financial resources, international support is critical for its development endeavours. At the same time, we strongly feel that such support is required to be provided through government channel in identified areas of priority sector in line with the principle of aid effectiveness. Therefore, we would like to request all donor countries to use government channel for their support and firmly recognize the national leadership and ownership in development efforts rather than channeling such precious resources through non-transparent agencies, NGOs and other entities, for there is a high possibility of such support being used in unproductive sector in an unaccounted and non-transparent manner. Moreover, in the absence of a proper mechanism for ensuring accountability, such method is likely to foster corrupt practices and the misuse of precious resources for unwanted activities.

Finally, once again, I would like to put on record our sincere appreciation to all of you for your continued support in institutionalizing peace and political changes in Nepal. Peace, stability, and prosperity in Nepal, I believe, are important not only for our neighbourhood, but also for this region and beyond. We highly value your consistent support during the difficult time of Nepal. I am confident that your support will be further enhanced in new era of peace and reconstruction.

Briefing to Diplomatic Community in Kathmandu on the current political situation in Nepal by Hon. Mr. Kamal Thapa, Deputy Prime Minister and Minister for Foreign Affairs