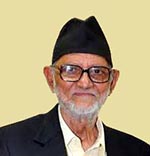 Prime Minister Sushil Koirala has clarified on Sunday that the British RAF Chinook   helicopters were barred to enter Nepal due to Nepal’s difficult terrain.

At a press meet organized in Baluwatar on Sunday, Prime Minister Koirala said, ”the British Chinook were barred due to Nepal’s difficult terrain and the number of choppers already available in the country”.

Prime Minister Koirala in press meet informed that he had cordial talk with British Prime Minister David Cameroon on Saturday and requested UK’s involvement in the rehabilitation process.

Nepal government has been in controversy after barring British Helicopter to join the relief works as the helicopters from India, China and USA are helping take food, water and tents to affected communities. Foreign Minister Mahendra Bahadur Pandey had said that he had blocked the Chinook helicopter to land in Nepal airport.

The government has allocated Rs.20 billion as seed money for already set up rehabilitation fund that targets of raising Rs 200 billion.