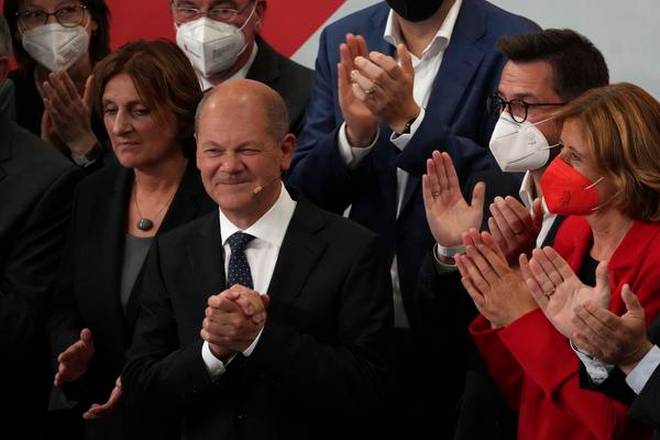 Election officials said early September 27 that a count of all 299 constituencies showed that the Social Democrats won 25.9% of the vote, ahead of 24.1% for the Union bloc.

The environmentalist Greens came third with 14.8% followed by the pro-business Free Democrats with 11.5%. The two parties have already signaled that they are willing to discuss forging a three-way alliance with either of their two bigger rivals to form a government.

The far-right Alternative for Germany came fourth with 10.3%, while the Left party took 4.9%. The party, known by its German acronym AfD, failed to get its core issue — migration — onto the campaign agenda this year.

Despite the projected outcome, party co-leader Tino Chrupalla said he was “very satisfied” by the result and welcomed the heavy losses for Chancellor Angela Merkel’s Union bloc.
AfD said four years ago that it would “hunt” Ms. Merkel who said in 2018 that she would not run for a fifth term. Other parties have ruled out any cooperation with AfD.

For the first time since 1949, the Danish minority party SSW was set to win a seat in parliament, officials said.

Germany’s Left party has scraped into Parliament, despite failing to meet the required 5% threshold.

The Left, which is partly rooted in the communist party that ruled East Germany for decades, managed to win three constituencies outright in the September 26 election. Had it failed to win those constituencies it would likely have been kicked out of the Bundestag, as it is currently projected to receive only 4.8% of the vote.

Another party, the South Schleswig Voters’ Association, looks set to win its first seat in Parliament since 1949, German public broadcaster ARD reports. Election officials said that the party is exempt from the 5% rule because it represents a national minority group, the Danes in northern Germany.

Voters in the German capital have backed a proposal for the Berlin regional government to take over nearly 2,50,000 apartments worth billions from corporate owners to curb rising rents. A nearly complete count of the September 26 referendum showed 56.4% of voters in favor of the measure, and 39% opposed.

The non-binding referendum forces the Berlin government to consider expropriating big landlords in a radical move to cool one of Germany’s hottest real estate markets, where rents have become unaffordable for many residents in recent years.

Also on September 26, the center-left Social Democrats appeared to have defended their hold of the mayoral post in the capital. Initial projections indicated that the Greens had won, but subsequent counts showed them falling behind with 18.8% of the vote compared to the Social Democrats’ 21.4%.

In a second regional election held in parallel to the national vote on September 26, the Social Democrats were set for a strong win in the northeastern state of Mecklenburg Western-Pomerania. The party was projected to get 39.6% of the vote, ahead of the far-right Alternative for Germany with 16.7%. Exit polls showed the Social Democrats’ current coalition partners, the Union bloc, coming third in the state with 13.3%.

Outgoing German Chancellor Angela Merkel’s Parliament seat has gone to a candidate from the rival Social Democrats for the first time since 1990.

Ms. Merkel won the country’s most northeasterly constituency in the first free elections after German reunification, and then defended the seat in seven subsequent elections. The long-time leader announced in 2018 that she would not run for office again. Nationwide in the September 26 election, Merkel’s Union bloc saw its worst result since 1949, coming second behind the center-left Social Democrats. The latest projections give it 24.1% of the vote, a drop of almost 9 percentage points from 2017.

The far-right Alternative for Germany has come out top in the eastern states of Thuringia and Saxony. The party, which is under scrutiny from Germany’s domestic intelligence agency due to its extremist links, received 24.6% of the vote in Saxony and 24% in Thuringia. It also won 17 constituencies in the two States and neighboring Saxony-Anhalt. The party’s nationwide share of the vote stood at 10.5%, down 2 percentage points compared to 2017, when it first entered parliament.

The candidate for German Chancellor of the center-left Social Democratic party has defeated the Greens’ Chancellor candidate in the contest to represent Potsdam outside Berlin. Social Democrat Olof Scholz won the seat with 34% of the votes, while Green candidate Annalena Baerbock got 18.8%, according the German news agency dpa. However, Ms. Baerbock will still make it into the German parliament via the Green’s party list.

Both the Social Democrats and the Greens made gains in the elections, but the Greens had hoped for better results.

Projections from public television, based on exit polls and early vote counting, put voters’ support at around 26% for the Social Democrats and about 14% for the Greens.

The mood was subdued at the headquarters of Chancellor Angela Merkel’s center-right Christian Democratic Union as the building began to empty following the party’s poor showing in the election. One of the few people remaining at the headquarters was 34 year-old Salahdin Koban, a party member from Berlin. Trying to explain the CDU’s losses, Mr. Koban said too many mistakes had been made during the campaign by candidate Armin Laschet. He also said that in general, it was hard for anyone to succeed Angela Merkel as Chancellor.

Merkel announced in 2018, that she would not run again in this election. Mr. Koban called Merkel ‘simply an icon” and for anyone “to follow in her footsteps is difficult.”

Social Democrats supporters waved the party’s red flags, broke into chants and burst into long party candidate Olaf Scholz walked onto the stage at the party’s headquarters in Berlin.

Mr. Scholz thanked the crowd, voters and campaigners across the country. saying on September 26 that the party managed to pick up vote in three separate elections — nationally, in Berlin and in the Mecklenburg-Western Pomerania State elections. Michael Mueller, the outgoing mayor of Berlin who ran for a seat in the country’s national Parliament, said as he stood in the crowd: “I couldn’t be happier tonight.”

The candidate from outgoing Chancellor Angela Merkel’s Union bloc says the party will do “everything we can” to form a new government. Mr. Laschet said Germany will likely have its first national government composed of three parties. He said that “we will do everything we can to form a government under the Union’s leadership, because Germany now needs a coalition for the future that modernizes our country.” Mr. Laschet was surrounded by his party’s top brass, including Ms. Merkel, as he spoke at its headquarters in Berlin.

Hundreds of people burst out in spontaneous chants of “Olaf, Olaf”- the first name of the Social Democrats’ candidate for chancellor Olaf Scholz — when exit poll results flashed acroos TV screens at the party’s Berlin headquarters. A cheering Renée Röske from Cologne said she had been telling everyone that Scholz was the “best candidate” and that it’s now reflected in the exit polls. The 42 year-old said she noticed over the summer that once people realized that Ms. Merkel isn’t running again, they became more interested in politics and started to inform themselves about the three main candidates.

She said people noticed that Mr. Scholz “did the right things” during the pandemic and “that’s why the SPD in now leading, because Scholz is good.”

Germany’s election authority made it clear that center-right chancellor candidate Armin Laschet’s votes will be valid although they could be seen as he put his ballot paper into the ballot box. German election rules state that ballot papers should be folded in such a way that it’s not possible to see how the person voted. It wasn’t immediately clear whether election officials in Mr. Laschet’s constituency in Aachen had noticed that his paper was folded wrongly, a moment that was caught by cameras.

Without explicitly naming Laschet, the election authority tweeted that “a nationally known politician voted for his own party, as expected.” It said that couldn’t be seen as an attempt to influence voters.