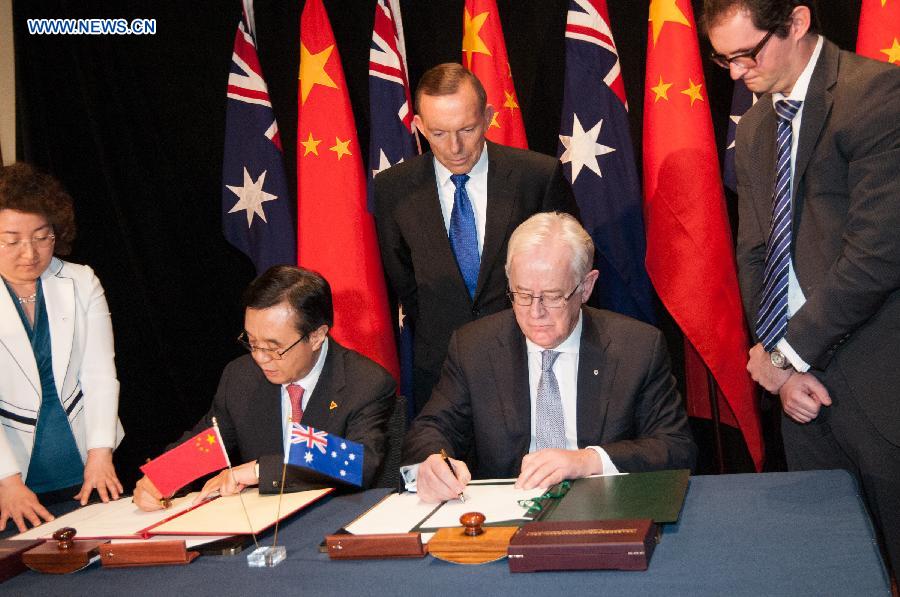 CANBERRA, June 17 (Xinhua) — The Australian and Chinese governments signed a long-awaited free trade agreement in a ceremony in Canberra on Wednesday, freeing up trade between the two countries.

In celebrating the signing on Wednesday, Abbott said that the China-Australia FTA (ChAFTA) signified a mutual trust between the two countries. He said the agreement was much more than just a deal with the world’s coming economic superpower, it was “proof of Australia’s trust in China.”

“Today is a truly historic step forward in our comprehensive strategic partnership,” Abbott said. “I hope all of you will remember today. One day we will be able to say to our children and grandchildren that, yes, we were there the day this extraordinary agreement was signed between our two countries.”

A statement released by the Chinese government said the signing of ChAFTA was a significant development because, of all the free- trade agreements involving China, this one boasted “the highest level of overall trade and investment liberalization.”

The statement said Australia was the second largest destination, after Hong Kong, for China’s overseas investment. “It is expected ChAFTA will facilitate the flow of capital, resources and people and benefit industries and consumers in both countries,” it said.

Upon full implementation of the agreement, tariffs will be lifted on 95 percent of Australian exports, hurdles will be lowered for Chinese businesses to invest in Australia and more visas granted for Chinese on working holidays.

Australians will soon benefit from the cheaper cost of electronics and whitegoods, and their spending on these items is expected to boost the economy.

Chinese consumers, meanwhile, should have great access to goods such as Australian beef, dairy products, wine and boutique whisky, as well as niche Australian products such as sea cucumbers, opal products and even deer velvet. The reduced tariffs on these items will make them much more affordable.

He told News Corp on Wednesday that cheaper Chinese imports would help stimulate businesses such as high-end manufacturers because they could get parts more cheaply.

“The world has changed and we need to get away from this mindset that exports are good and imports are bad. Cheaper products are also good for households and consumers, they increase buying power which translates into higher living standards,” Robb said.

Negotiations for the deal began in April 2005 and Abbott said after Wednesday’s ceremony at the Australian National Gallery that it was a momentous day to finally have the ChAFTA signed and sealed.

“I trust that today our Chinese friends will enjoy the fine beef and the good wine that will soon be more readily enjoyed by their countrymen,” Abbott said.

He described both China’s president Xi Jinping and Dr. Gao as shrewd and perceptive politicians.

“I was indeed truly delighted today to receive a letter from President Xi conveying his personal congratulations on the signing of the agreement,” Abbott said.

The president will shortly receive a letter from Abbott conveying great pleasure at “what is the beginning of the next chapter in the relationship between our two countries,” he said.

It is the third free trade agreement Robb has completed after sealing deals with Japan and South Korea.

“It will see literally billions of dollars, many hundreds of thousands of jobs and will underpin a lot of our prosperity in the years ahead,” Robb told ABC radio.

The agreement was hailed on Wednesday by two international relations experts in Australia who said it should bring clear benefits to both countries.

Peter Drysdale, Head of East Asian Bureau of Economics Research, Crawford School of Public Policy at Australian National University, told Xinhua in an interview that the FTA was “an important landmark in the relationship” between China and Australia.

“What is does is opening up opportunities for change,” Drysdale said. “With the end of the commodity price boom, this is a normalization of the resource trade relationship between the two countries in which Australia will become an even more important, low-cost supplier to China. ”

“But other elements in the relationship will become more important: including the services trades that are being opened up. ”

“The Agreement with Australia can provide a foundation for Australia and China to work together in the regional beyond narrowly trade issues, through the Asian Infrastructure Investment Bank for example, and globally, as China hosts the G20 next year.”

Another commentator interviewed by Xinhua, James Laurenceson, Deputy Director of the Australia-China Relations Institute at the University of Technology in Sydney, said ChAFTA had come at a great time for Australia.

“By reducing barriers to agriculture and services trade, ChAFTA will act to not only boost the overall value of trade between Australia and China but also make it broader-based. In short, it sets up a deeper and more balanced trade relationship in the future,” Laurenceson said.