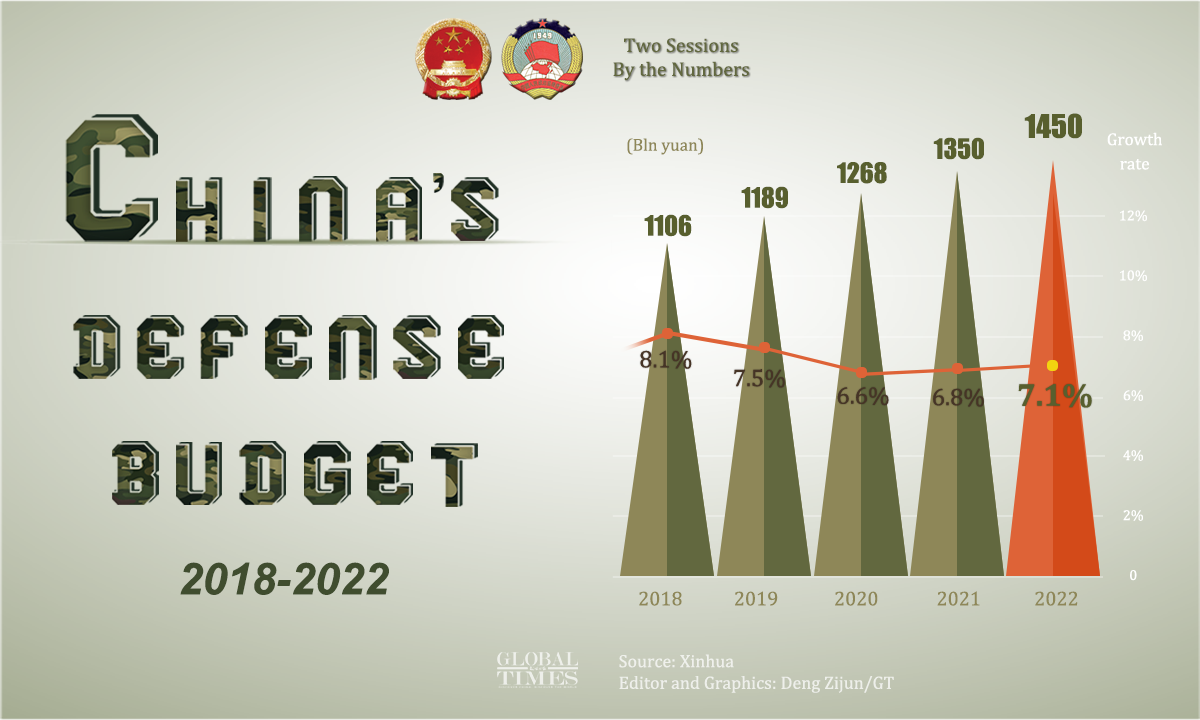 Global Times (6 March 2022) – China announced on Saturday its plan to boost the country’s defense budget by 7.1 percent, to a total of 1.45 trillion yuan ($230 billion) in 2022, with analysts saying that the proposed budget growth is steady and reasonable at a time when China needs to modernize its military capabilities to safeguard national sovereignty and territorial integrity amid severe external threats and an unstable security environment.

The defense budget increase was mentioned in a draft budget report issued at the opening of the annual session of the National People’s Congress (NPC), the country’s top legislature, on Saturday.

The defense budget hike for 2022 comes in the context of an unstable security situation around China, and China’s schedule to push forward its military modernization, and is made possible thanks to positive economic growth brought by China’s effective COVID-19 prevention and control measures, experts said.

Wei Dongxu, a Beijing-based military expert, told the Global Times on Saturday that the increase in China’s military budget is proper and reasonable given that China is aiming to develop a modernized military.

The 7.1 percent increase should not be considered a high number given the large scale of the Chinese military, the huge needs of upgrades to weapons and equipment, and the growing external threat China is facing, Song Zhongping, a Chinese military expert and TV commentator, told the Global Times on Saturday.

China needs to upgrade its arsenal by commissioning new weapons and equipment, enhance realistic combat-oriented exercises, build up logistics support and bring better welfare to military personnel. This requires more funds at a time when prices are going up because of inflation, analysts said.

The communiqué of the fifth plenary session of the 19th Central Committee of the Communist Party of China, held in Beijing in October 2020, called for “significant strides in the modernization of national defense and armed forces in the next five years” one of the main goals for the development of the economy and society in the 14th Five-Year Plan. It also stressed that development of the economy should go side-by-side with strengthening of the military.

By the 100th anniversary of the founding of the Chinese People’s Liberation Army (PLA) in 2027, the centennial goal of military development should be achieved, and by 2035 the country should achieve modernization of the national defense and armed forces, it was announced at the plenary session.

In 2021, China made major strides in strengthening national defense and the armed forces, getting off to a good start in this endeavor in the 14th Five-Year Plan period, and in 2022, China will work toward the goals for the centenary of the PLA in 2027, enhance military training and combat readiness, stay firm and flexible in carrying out military struggle, and safeguard China’s sovereignty, security and development interests, according to the Government Work Report delivered at the opening of the annual session of the NPC on Saturday.

J-20 fighter jets attached to an aviation brigade under the PLA Air Force taxi in close formation during a flight training exercise on January 7, 2022. Photo: eng.chinamil.com.cn

According to media reports, in 2022 China will likely launch its third aircraft carrier, expand production of the J-20 stealth fighter jet, and modernize its nuclear arsenal. Throughout the year, the Chinese military is expected to conduct drills, from basic ones to more complex, challenging drills that feature large-scale use of fuel and live munitions. All of these need the support of a sufficient budget, observers said.

The growth in budget is also needed because some external forces have been constantly enhancing their military deployment and stirring up trouble near China, Wei said.

This includes the US military’s provocative, monthly warship transits in the Taiwan Straits, close-in reconnaissance missions with spy planes in the East China Sea and the South China Sea, and warship intrusions into Chinese territorial waters in the South China Sea, not to mention its rallying of allies far away from China like France, Germany and the UK to send warships and join the trouble-stirring moves in the region, several experts reached by the Global Times pointed out.

The US also got Japan, India and Australia to join the Quad security dialogue, and persuaded Australia and the UK to join the AUKUS security pact to surround China. The US also held intensive military exercises near China, while sending the wrong signals to Taiwan secessionists by selling weapons to the island.

While the situation along the China-India border has been kept stable and manageable, the standoffs have not yet been completely solved after rounds and rounds of talks.

Only by having a sufficient defense budget can the Chinese military build a better security environment and safeguard China’s national sovereignty and territorial integrity, experts said.

China set its GDP growth target for 2022 at around 5.5 percent, according to the Government Work Report. China’s GDP expanded at 8.1 percent in 2021.

Chinese military expert Fu Qianshao told the Global Times that China’s defense budget increase is expected, because the country’s military spending has been growing alongside the growth of the national economy. And while COVID-19 did affect China’s economic development over the past two years, the country’s epidemic prevention and control measures were more effective than in other countries, leading to positive economic growth.

In return, China’s increased military spending can be used to safeguard the fruits of the country’s economic development, analysts said.

US President Joe Biden is planning a defense budget exceeding $770 billion for the next fiscal year, eclipsing the record budget requests by former president Donald Trump, Reuters reported on February 17.

This means the US’ defense budget will remain about four times that of China’s, observers said.

Experts told the Global Times that the US’ military development has been focusing on China, as its new weapons and equipment, like the next-generation attack nuclear submarine, destroyer, fighter jet, as well as the B-21 bomber and hypersonic missiles, are being developed with China in mind.

While China’s defense budget hike will allow the Chinese military to deal with military threats posed by the US and others, China is not interested in joining an arms race, and the country’s defense policy is defensive in nature, analysts said.

Fu said that China’s military spending has been kept at about 1.3 percent of GDP over the past few years, which is a very restrained figure compared with other countries in the world, particularly the US.

The world average for that figure is more than 2 percent, so in fact China still has room to increase its defense budget, but China is not seeking an arms race even when countries like the US, Japan and Germany are greatly hiking their military spending, Song said.

With a proper increase to its defense budget, what China is doing is safeguarding its national sovereignty, security and development interests, Song said.

Some foreign reports related the defense budget increase to the Ukraine crisis, but this is nonsense, another military expert told the Global Times on Saturday under the condition of anonymity.

There are worries about the conflict, as Germany recently hiked its defense spending, but the conflict between Russia and Ukraine only started a few days ago, while China’s defense budget is likely drafted months before, analysts said.

China’s stance on the Ukraine issue has been consistent and has called for Ukraine and Russia to find a solution to the issue through negotiations, and supports all constructive international efforts conducive to a political settlement instead of fueling escalation of tensions, they said.