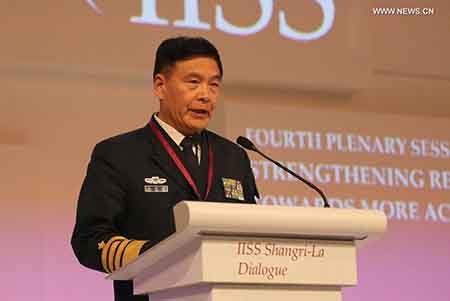 China is committed to upholding peace and stability in the South China Sea, Sun Jianguo, a senior Chinese military official, said Sunday in his keynote speech to the Shangri-La Dialogue, while calling on relevant countries to work together in the same direction.

Sun Jianguo, deputy chief of the General Staff of the Chinese People’s Liberation Army (PLA), said China has always kept in mind the large picture of maritime security in the South China Sea, and at present the situation there is on the whole peaceful and stable.

Sun said, “In spite of the sufficient historical and legal evidence and its indisputable claims of rights and interests, China has exercised enormous restraint, making positive contributions to peace and stability of the region and the world at large.”

His comments came a day after U.S. Defense Secretary Ashton Carter said at the ongoing dialogue that the United States will continue to fly, sail, and operate in the region wherever international law allows, and called for “an immediate and lasting halt to land reclamation by all claimants” in the South China Sea.

The senior Chinese military official said China’s construction on some islands and reefs is aimed at improving their functions and the working and living conditions of personnel stationed there as well as better performing its international responsibilities and obligations in fields such as maritime search and rescue, disaster prevention and relief, and maritime scientific research.

Sun also noted that China is a major country in the world, and the construction’s scale and pace are in line with the international responsibilities and obligations it assumes in the South China Sea.

Pointing out that the construction projects fall well within the scope of China’s sovereignty and are legitimate, justified and reasonable, the senior Chinese military official said they do not target any other countries or affect the freedom of navigation.

Chinese Foreign Ministry spokesperson Hua Chunying on Saturday urged the United States to keep its promise of a neutral position on the sovereignty issue and stop harming regional peace and stability. Hua said the South China Sea is not a U.S. concern, so it should act prudently and respect efforts by countries in the region to maintain peace and stability.

Huang Jing, director of the Center on Asia and Globalization at the National University of Singapore, told Xinhua on the sidelines of the dialogue that the most effective way to solve the South China Sea issue is through negotiations between concerned parties; any attempt to introduce outside forces will only complicate it.

The current architecture “is guided by U.S. alliances such as the U.S.-Japan alliance, U.S.-Philippines alliance, U.S.-South Korea alliance as well as the U.S.-EU alliance,” he said, adding that they were set up to confront rather than cooperate, so they’ re essentially exclusive, not inclusive, but the world has changed significantly.

Zhao Xiaozhuo, a researcher with the PLA’s Academy of Military Science, said U.S. response to China’s land reclamation by simply sending more military aircraft and vessels to the region, is not a way to solve problems; on the contrary, it is creating problems.

He said, “The United States is struggling between its rebalancing strategy in the Asia-Pacific and its ‘new type’ of relationship between major powers, but it’s not doing a good job balancing the two, especially on issues related to territory and territorial waters. The United States has created some contradictions which even itself cannot resolve.”

Sun Jianguo said China, committed to peaceful development, upholds a national defense policy that is defensive in nature; a more developed and stronger China will bring important opportunities, common prosperity and positive energy to countries around the world.