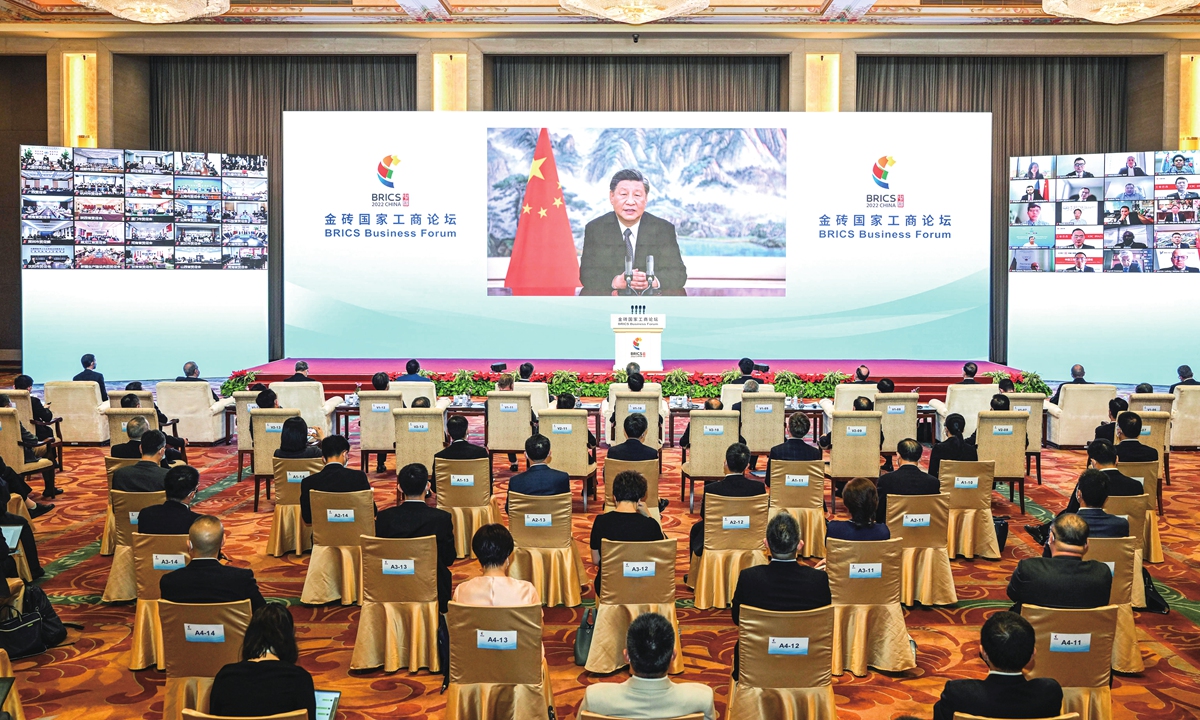 By Yang Sheng Chi Jingyi and Wan Hengyi (Global Times, 22 June 2022) – Chinese President Xi Jinping on Wednesday offered his answers to the questions of the times at a keynote speech in virtual format at the opening ceremony of the BRICS Business Forum in Beijing and called for joint efforts to seek and safeguard peace as he said “the Ukraine crisis has again sounded the alarm for humanity.” He also urged efforts to strengthen global economic governance and increase the representation and voices of emerging markets and developing countries, and experts said this has pointed out the correct directions to solve current challenges that are threatening global development and recovery.

Xi will also host the 14th BRICS Summit on June 23 and the High-level Dialogue on Global Development on June 24. Experts said when US-led Western mechanisms like the G7 and NATO are also going to hold their summits later this month, it is significant and necessary for China and other major emerging economies as well as developing countries in the BRICS Plus, that represent the majority of the international community to voice their joint stance over the current global challenges and crisis, and to boost unity to find a correct direction to realize recovery.

The G7 and NATO summits will continually intensify existing tensions and crisis, and will focus on bloc-to-bloc confrontation and major power competition to target China and Russia and preserve the US-dominated global order, said analysts. They noted this will make the world more divided than united, so it is important for China and other BRICS members to present their views that could better address the concerns shared by the majority of the international community, and point out the consequences of the wrong direction guided by the US.

Xi also called on major developed countries to avoid negative spillover effects of their policies and prevent severe shocks for developing countries, and he also said “sanctions are a boomerang and a double-edged sword” that “will only end up hurting one’s own interests as well as those of others, and inflict suffering on everyone.”

The attendees also called to boost economic globalization and integration while opposing sanctions and decoupling, as this is the key to realizing global recovery after the COVID-19 pandemic. Chinese analysts said the BRICS is an organization formed by major emerging economies with constructive influence to add more certainty to a world in turmoil, while the US-led Western system is trying to further tear the world apart and intensify confrontations rather than seeking solutions to global challenges via cooperation.

“It has been proved time and again that sanctions are a boomerang and a double-edged sword. To politicize the global economy and turn it into one’s tool or weapon, and willfully impose sanctions by using one’s primary position in the international financial and monetary systems will only end up hurting one’s own interests as well as those of others, and inflict suffering on everyone,” Xi noted.

“The Ukraine crisis is another wake-up call for all in the world. It reminds us that blind faith in the so-called ‘position of strength’ and attempts to expand military alliances and seek one’s own security at the expense of others will only land oneself in a security dilemma,” Xi said.

This is direct criticism toward the US and some Western countries who instigated problems between Russia and Ukraine via NATO expansion and forced or threatened other countries to join their sanctions against Russia after the crisis, said Chinese analysts, noting that the BRICS countries share a similar neutral position on the Ukraine crisis and they also receive similar pressure from the West on the issue of sanctioning Russia. Now they are expressing unity between emerging economies to withstand the pressure and act independently to safeguard their shared interests of cooperation and development.

Putin said in his speech that “more and more politically motivated sanctions are continuously introduced, mechanisms of exerting pressure on competitors are further strengthened. There is intentional destruction of cooperation ties; transport and logistics chains are destroyed. And all this is contrary to common sense and basic economic logic, it undermines business interests on a global scale, negatively affecting the wellbeing of people, in effect, of all countries.”

Modi said “BRICS was established with the belief that this group of emerging economies could emerge as engines of global growth. Today, when the world is focusing on post-COVID recovery, the role of BRICS countries will be very important.”

Wang Lei, director of the BRICS Cooperation Center at Beijing Normal University, told the Global Times that the trend for global recovery is very weak and fragile, which is a main task for the BRICS Business Forum this time.

“Although the cooperation mechanisms formed by developed countries like the G7 will also set the global recovery agenda, in fact, they are driven by the task of preserving the existing system dominated by the US or the West, and this makes them unable to address the global challenges fairly,” Wang said. This means it will not be a practical and effective mechanism that could unite major emerging economies but will only create more divergences, he noted.

The BRICS mechanism provides a stage for the voices of developing countries to be heard, said Zhu Xufeng, executive director of the Institute for Sustainable Development Goals, Tsinghua University. Amid a shifting international landscape and global pandemic, the five countries have become a ballast for global economic development, Zhu noted.

“China is the biggest economy in the BRICS, and in order to promote the BRICS mechanism to play more effective role, China has provided the platform for fair communication and also offered public goods to the world for joint development,” like the Belt and Road Initiative, and it will continually work with other partners under the BRICS and BRICS Plus mechanism to contribute more positive energy to the world in turbulence, Zhu noted.

Xi said that “The BRICS mechanism is an important cooperation platform for emerging markets and developing countries. The business community is a dynamic force driving BRICS’ effective cooperation.”

“BRICS cooperation has now entered a new stage of high-quality development. I hope that you business leaders will continue to act with tenacity and in a pioneering spirit, and champion open, innovative and shared development so as to add new impetus to BRICS cooperation.”

Xi also said China will continue to enhance opening-up and foster a business environment that is based on market principles, governed by law and up to international standards. He also encouraged businesses to invest and develop in China, enhance trade and economic cooperation, and share development opportunities.

Attendees from business circles worldwide echoed the call and said the inter-connectivity and integration is key to recovery. The decoupling trend and sanctions promoted by the West that could harm the global supply and value chains will be harmful to the world’s efforts to realize global recovery, and many of them place hope on China to guide the direction for recovery.

Open trade is an important element of a connected world, Busi Mabuza, Chairperson of the Industrial Development Corporation of South Africa, said on Wednesday at the BRICS Business Forum.

“Trade and market openness have historically gone hand-in-hand with better economic performance in countries at all levels of development, creating new opportunities for workers, consumers, and firms around the globe and helping to lift millions out of poverty,” Mabuza said.

“Integration is a golden thread of the world economy. Digitization has accelerated international integration enabling the increased flow of trade, capital, money, direct investment, technology, people, information and ideas across national boundaries. Therefore, the global economic recovery after the COVID-19 pandemic will rely on how we leverage the integration,” Mabuza said.

Yousef Al-Benyan, vice Chairman and CEO of Saudi Basic Industries Corporation (SABIC), said on Wednesday that “The world economy is seriously ill. Its lifeblood – international trade – has become weak, sluggish and congested. After rebounding to double-digits in 2021, the annual growth rate of trade volume is now expected to dwindle down to low single-digit rates.”

“If I, who comes from outside the BRICS countries, can exemplify the increased openness that our world sorely needs, then I would be extremely satisfied with my participation here today,” said Al-Benyan. Much of the world’s future investment in petrochemicals is expected to end up in China. And a good portion of that will have to come from foreign direct investments (FDI), he noted.

Wang Yiwei, director of the Institute of International Affairs at the Renmin University of China, told the Global Times that more and more countries sense that the Western-dominated or the US-dominated orders that push decoupling by using the excuses of resilience and security of supply chains are problematic, and will divide the world into pieces. Since developing countries like the BRICS are contributing more than developed countries in terms of the world economic growth, world order will be more reasonable and fairer.