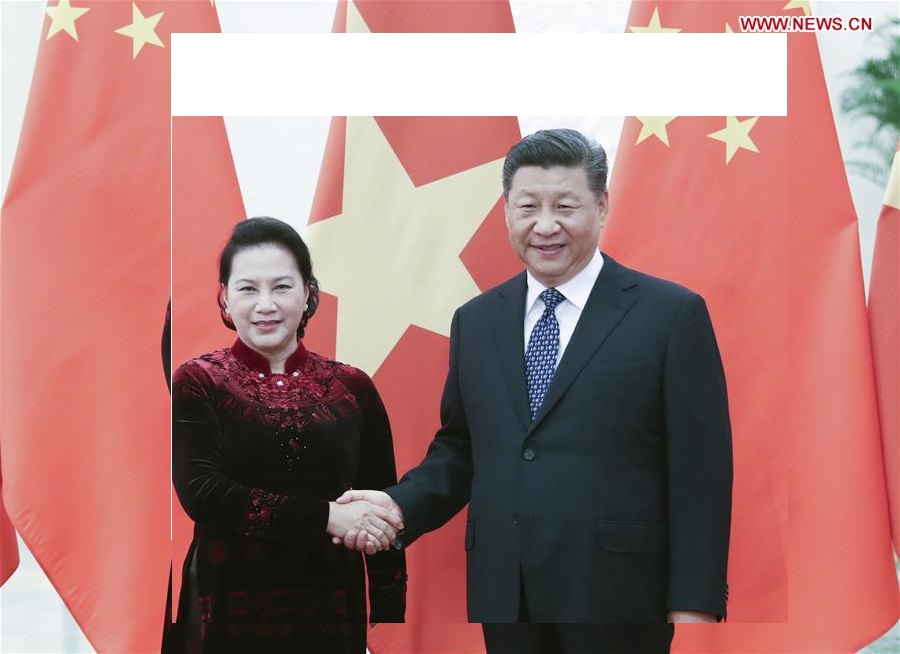 Calling the two countries “comrades and brothers,” Xi said that they form a community of shared future with strategic significance.

As China and Vietnam are going to mark the 70th anniversary of diplomatic ties next year, Xi called on the two sides to stay true to their original aspirations, look at the big picture, carry forward their friendship and enhance their cooperation so as to lift their ties to a new high from a new starting point.

Their two parties should strengthen exchanges on Party and state governance, and learn from each other’s theoretical innovation so as to maintain their vitality and jointly push forward the socialist cause, he said.

On upgrading mutually beneficial pragmatic cooperation, the president said the two countries should enhance the integration of development strategies and further their efforts in jointly building the Belt and Road and the “Two Corridors, One Economic Circle.”

He also called on the two sides to increase people-to-people exchanges to pass on their friendship from generation to generation.

As for maritime issues, the president stressed that both sides should act in line with the fundamental interests of the two countries and their peoples, earnestly implement the consensus reached by the leaders of the two parties and the two countries, and safeguard peace and stability at sea with concrete actions.

Xi also asked both sides to enhance coordination and collaboration in international affairs for their common interests.

Speaking highly of the ties between the legislative bodies, the president called on the National People’s Congress of China and the National Assembly of Vietnam to further exchanges and cooperation, and work harder in leading public opinions and promoting mutual understandings between the peoples to consolidate their friendship foundation.

The Vietnamese side will never forget the valuable support and assistance provided by Chinese comrades in the past and today, she said.

Vietnam believes that Chinese comrades will accomplish the significant development goals set at the 19th National Congress of the Communist Party of China (CPC) under the leadership of the CPC Central Committee with Comrade Xi at the core, she stressed.

Ngan said Vietnam stands ready to work with China to follow as guidance the strategic consensus reached by the leaders of the two parties and the two countries, firmly support each other on the socialist path, carry forward the traditional friendship, deepen mutually beneficial cooperation, and effectively manage differences, so as to push forward their bilateral comprehensive strategic partnership of cooperation.