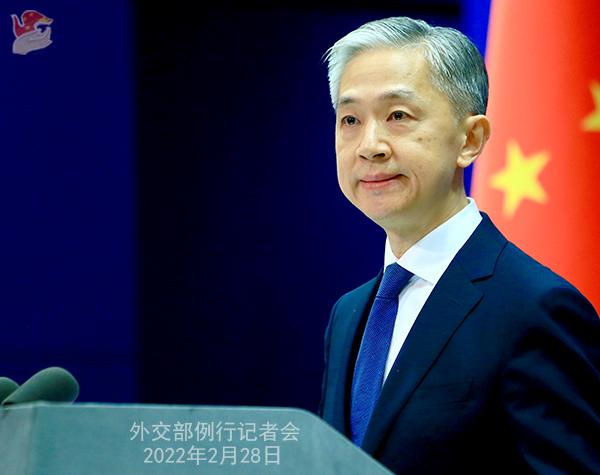 NFA (KATHMANDU, 28 February 2022) – China has noted the ratification of MCC with  ‘interpretive declaration’ and  believed it will respect the sovereignty of Nepal.

In a regular press conference today, the spokesperson of Chinese Foreign Ministry Wang Wenbin has responded in a question.

What was the question and what was his response ?

Hubei Media Group: On February 27, the Nepalese Parliament ratified the Millennium Corporation Challenge (MCC) with the US. It also released an “interpretive declaration” stressing that the Nepalese constitution shall prevail over the MCC compact, Nepal shall not be a part of any military or security alliance including the Indo-Pacific Strategy of the US, Nepal will not comply with the current and future US laws or policies other than for the implementation of the MCC, and the US’ activities in Nepal are regulated and supervised by Nepalese laws. A strong response to the ratification is found domestically. Some Nepalese lawmakers said that if the US fail to comply with the interpretive declaration, the MCC will automatically be inactivated. Protests and demonstrations broke out in many places in Nepal. What is China’s comment?

Wang Wenbin: China has noted the decision and the “interpretive declaration” by the Nepalese Parliament. China has stressed on multiple occasions that international development cooperation should follow the principle of mutual respect and equal treatment, and fully respect the sovereignty of the country concerned and the will of the people. It should not interfere in other country’s internal affairs, attach political strings, or engage in coercive diplomacy, still less undermine other country’s sovereignty and interests out of one’s self-interests.