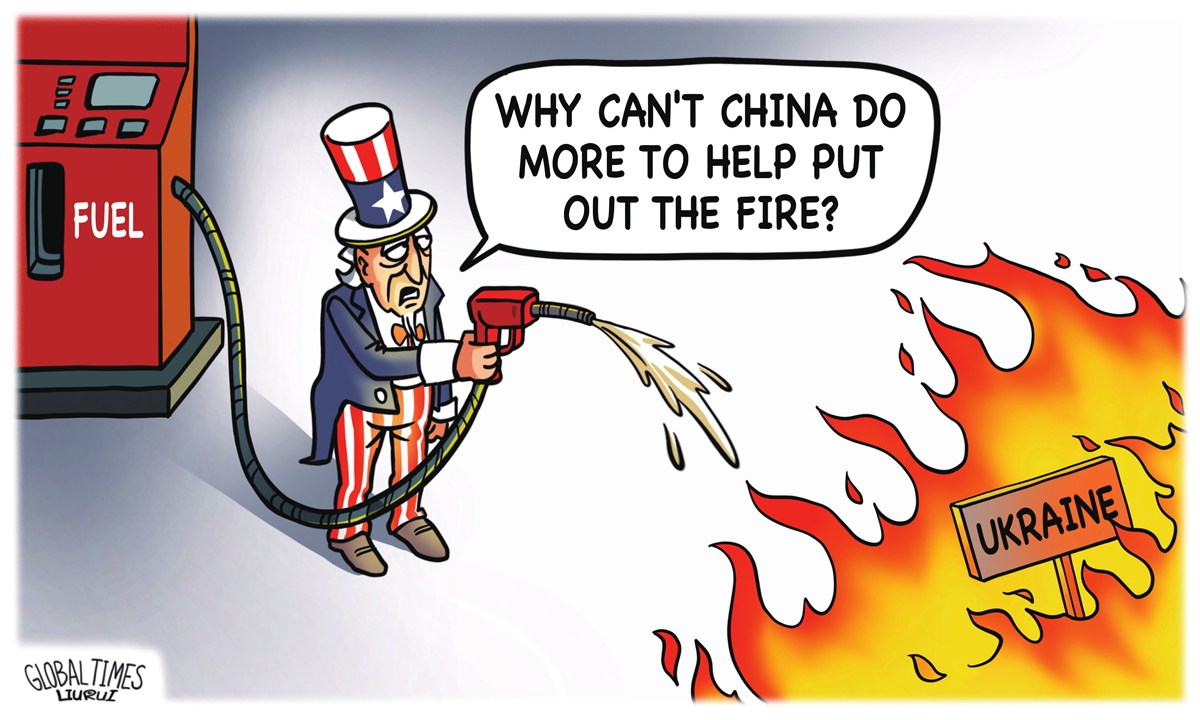 Global Times (20 March 2022) – The close relationship between China and Russia has been a thorn in the US’ side, especially against the backdrop of the ongoing Ukraine crisis. With the simmering of the situation, it couldn’t be any clearer that Washington is eager to exploit the Russia-Ukraine conflict to drive a wedge between Beijing and Moscow.

For one thing, senior White House officials have on multiple occasions accused China of not exerting enough pressure on Russia to stop the country’s military action in Ukraine. US Secretary of State Antony Blinken said on Thursday before US President Joe Biden’s virtual meeting with Chinese President Xi Jinping that Washington will “impose costs” for any support Beijing provides to Russia’s actions against Ukraine. He urged Beijing to assume “responsibility to use its influence and defend the international rules and principles that it professes to support.” For another, an increasing number of Western media reports and analyses have emerged to hype how China’s ties with Russia have made China “uncomfortable” and “awkward” and warn that Beijing risks isolation if it doesn’t distance itself from Moscow.

NATO’s eastward expansion is the root cause of Russia’s anger and military operation in Ukraine. It’s the US that should put out the fire it lit in Ukraine. Ridiculously, it is demanding Beijing to do this job at the cost of damaging China-Russia relations. This is unreasonable and insidious. By pushing China to denounce Russia and asking China to bear the responsibility for the fatal strategic mistake the US and NATO made in the construction of so-called European security, Washington has no intention of hiding its desire to sow discord between China and Russia.

US State Department spokesperson Ned Price said on Monday that China could use its unique relationship to bring an end to Russia’s actions against Ukraine. What nonsense. Russia is an independent major power and China has no ability to exert influence on Russia’s decision on the Ukraine issue which it deems as a “life-and-death” matter.

If China really pressures Russia in a way that is inconsistent with the China-Russia comprehensive strategic partnership of coordination, it will only undermine the China-Russia relationship and sabotage mutual trust, which will be a huge strategic loss to both sides. This is what the US is eager and happy to see.

Washington knows that China cannot influence Russia or force it to do anything. But it has regarded the Ukraine crisis as a good chance to tear the two countries apart. The more discord Washington could sow between China and Russia, the more it will be in line with US interests. But how can Beijing and Moscow allow such an evil trick to succeed?

Not like the petty followers that Washington can manipulate at will, China and Russia are both independent great powers. Besides, China has maintained a consistent position over the Ukraine issue, emphasizing all sides’ security concerns and interests should be respected and upheld. Its position is out of its own interests and the interests of the region. It will never dance to the tune of the US or sacrifice relations with Russia to satisfy US demands.

It also should be noted that no matter how the Ukraine crisis evolves and how heavily Russia is targeted by the US now, Washington still views China as its biggest strategic competitor. China should bear this in mind all the time. It must not give the US any chance to drive a wedge in the China-Russia relationship.

For a long time, the West has misinterpreted the China-Russia relationship, believing it’s based on expediency and could be easily torn apart. The truth is, the China-Russia comprehensive strategic partnership of coordination has withstood the test of the time and is rock solid. It’s China’s most important and stable diplomatic strategic asset that cannot be damaged.