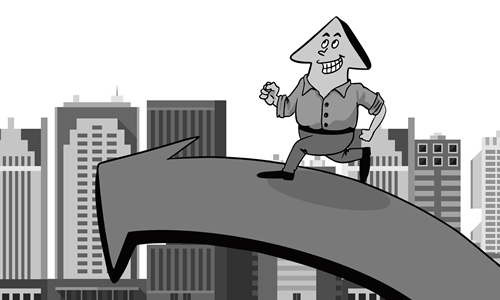 By Lian Ping (Global Times, 1 December 2019) – China’s economic growth slowed further in 2019 due to structural, cyclical and external factors. Nevertheless, the economy is expected to maintain a medium-high rate of growth – likely around 6 percent – in 2020, if China can reach a phase one agreement with the US over the year-long trade war and adopt more powerful counter-cyclical measures to boost the economy.

The drive from exports is expected to weaken further in the next year, and pressure has been mounting on China in this regard. There are several major factors that will influence exports in 2020. First, the global economy has hit the top of its current round of growth. Second, the reform direction of the World Trade Organization (WTO) is still unclear, and the multilateral trade rules continue to face major challenges. Third, the negative impacts from the $250 billion in tariffs the US imposed on Chinese goods are expected to be aggravated in the first half of 2020. If an initial agreement is reached by China and the US, the situation will improve in the second half of 2020. Despite this possibility, the whole-year performance of exports is unlikely to see significant improvement compared with 2019.

Consumption will make a bigger contribution to China’s economic growth in 2020, and the country will expedite reforms. In 2020, consumption in the automobile industry is expected to recover. Overall consumption will remain stable for the whole year and grow faster than investments and exports. It is likely to make a contribution of more than 70 percent to the national economy.

The difference between China’s consumer price index (CPI) and producer price index (PPI) has expanded in 2019. Under the influences of the pig production cycle and the African swine fever (ASF) epidemic, China’s production and supply of pork have seen a sharp drop this year. Pig production is expected to recover as soon as the second quarter of 2020, which means the price of pork will continue to rise in the first quarter of 2020. The CPI rise, however, is just a temporary phenomenon. It will drop after the second quarter of 2020, when it is expected to be controlled at around 3 percent. If exports recover to some extent in the next year, the conditions of manufacturing may also be improved, thereby promoting the PPI to remain stable after the second quarter.

China’s economy needs to maintain a certain growth speed while promoting its transformation next year. The country needs to accomplish its goal achieving a moderately prosperous society in all respects. Although the China-US trade war is approaching a phase one agreement, impacts from earlier tariffs continue to appear.

The world economy is expected to slow down in 2020, providing unfavorable external conditions for China’s economy. During this economic transformation, former economic drives including exports, infrastructure and real estate are taking on smaller roles, but they continue to make contributions alongside emerging sectors like the digital economy and new consumption.

China’s economy needs to overturn the slowdown in a timely manner so as to better manage market expectations, maintain market confidence and offer positive prospects for all sectors. Its whole-year growth goal can be set at 6 percent, which is entirely achievable if external pressure is relieved and more effective counter-cyclical measures are adopted to boost the economy. If the external environment worsens beyond expectations, China’s economy may perform slightly below its goal.

In order to prevent further slowdown in economic growth and maintain stable growth, it is important for China to take more forward-looking, counter-cyclical measures and employ more precisely targeted policies to improve efficiency.

In general, China needs to create more positive fiscal policy, raising the fiscal deficit to 3 percent or above. Its monetary policy needs to provide commercial banks more liquidity and improve financial institutions’ activities and ability to issue loans. The balance between supply and demand should be maintained in the pork market. A basically stable yuan exchange rate and cross-border capital flows need to be maintained.

The author is chief economist with Bank of Communications. [email protected]