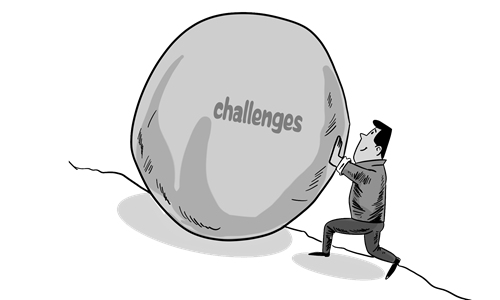 By Liu Yuanchun (Global Times, 13 December 2019) – The Chinese economy continues to slow down as it faces multiple pressures in 2019, but it is also showing resilience with the support of a complex set of stabilizing policies. Economic growth has remained in a rational and controllable range this year. 2020 will be a crucial year for China to secure a decisive victory in building a moderately prosperous society in all respects, but the country will face greater challenges, particularly in the following six aspects.

First, external challenges will be more demanding. The global economic downturn and great-power competition have entered new phases, bringing about unprecedented uncertainty to global economic policies. This will not only directly impact China through trade, but it will also negatively influence the open economy by undermining market confidence. In 2020, external demand is expected to continue weakening, the global manufacturing industry is set to slump, China-US strategic competition will enter a new stage, and the 2020 US election will bring further uncertainty to the prolonged trade war between the two countries.

Second, domestic demand is expected to remain weak and may accelerate the economic slowdown. China’s net exports have seen rapid growth this year, but domestic demand has experienced a significant decline. The economy is therefore more vulnerable and reliant on external demand, particularly when enterprises don’t expand their investment in production and residents don’t increase their consumption of durable goods. In the short term, China needs to stabilize foreign trade. The global economic slowdown will make it harder for China to maintain the rapid growth of net exports in 2020, and China must implement more targeted measures to boost domestic demand. More importantly, the decline in production investment does not just concern numbers, but also efficiency.

Third, the slowdown of economic growth may aggravate the current conditions of weak sectors and regions. As pressures mount for small and medium-sized enterprises, local financial risks may worsen. Changing economic structures in some regions may cause unemployment risks. In 2020, enterprises in eastern regions will find it difficult to turn a profit, and those in central regions should expect to see a further slowdown in the growth of revenue. Thus, employment will be at risk in certain regions and sectors. The automobile and mobile phone industries are still in steep decline. The real-estate, construction and information services industries have also contracted significantly. Downward sales and production in these industries mean that they face greater pressure when it comes to employment.

Fourth, the risk of a new round of deflation in the Chinese economy will increase in 2020, which deserves attention and requires preparation. Although the price of food – represented by pork – has risen sharply since the third quarter, driving the consumer price index (CPI) higher, this doesn’t mean that deflation will not occur next year. Instead, the continued falls of the non-food CPI, producer price index (PPI) and GDP deflator are highly similar to the initial performances of previous rounds of deflation. PPI trends from the fourth to the second quarter next year will need to be watched closely. Meanwhile, monetary policy needs to remain prudent.

Fifth, China should be wary of the risks that come with a structural rise in food prices – including pork – and weak overall demand. The prices of pork and other foods will continue to rise next year, leading to negative expectations in the market. Meanwhile, overall domestic demand will remain weak. These two factors are expected to have short-term impacts on the economy, causing severe problems for its macro-management in 2020.

Sixth, mitigated financial risks may recur in 2020. Although the financial sector is clearly moving to provide more support for the real economy, pressure from a poor monetary transmission mechanism still exists. And though financial risks have been mitigated this year, defaults will persist in the future. Particularly alongside the continued economic downturn, financial risks may appear repeatedly. Financial-risk mitigation and prevention will be the core focuses of macro-management next year.

The author is vice president of Renmin University of China. [email protected]