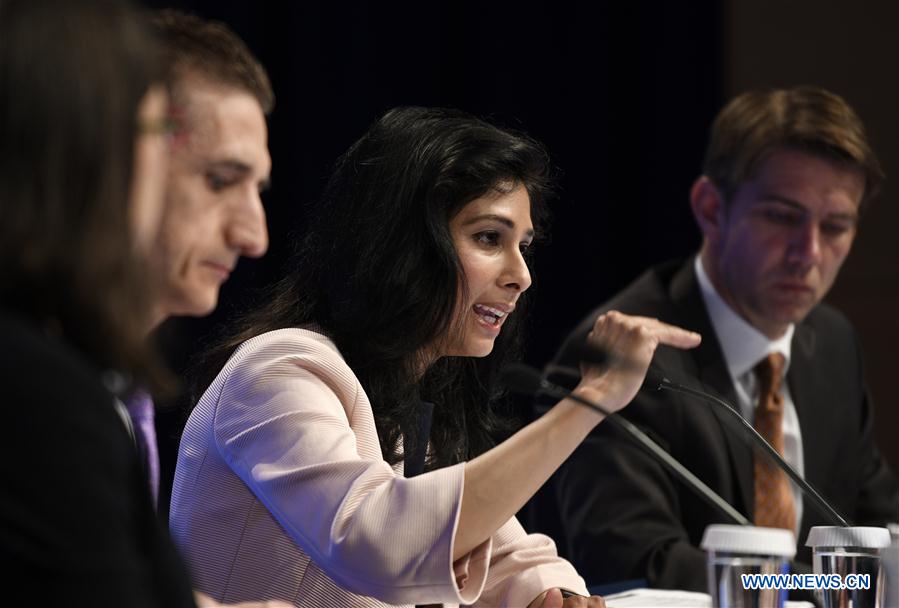 WASHINGTON, April 10 (Xinhua) — The International Monetary Fund (IMF) on Tuesday revised up the 2019 growth projection for China to 6.3 percent, while downgrading global growth forecast to 3.3 percent, according to a newly released World Economic Outlook (WEO).

The revision demonstrated the great resilience of the Chinese economy amid global headwinds, boosting confidence that the world’s second largest economy will maintain stable, healthy and high-quality development in the years to come.

The IMF’s new forecast for global growth in 2019 is down 0.2 percentage point from its estimation in January, signaling a broad-based slowdown.

“It reflects negative revisions for several major economies including the euro area, Latin America, the United States, the United Kingdom, Canada, and Australia,” Gita Gopinath, economic counselor and director of the IMF’s research department, said at a press conference Tuesday.

The IMF chief economist blamed the situation largely on global trade tensions, macroeconomic stress in Argentina and Turkey, disruptions to the auto sector in Germany, and financial tightening alongside normalization of monetary policy in the larger advanced economies.

With improved prospects for the second half of 2019, global growth in 2020 is projected to return to 3.6 percent, the report said, noting that the perceived recovery is “precarious” and predicated on a rebound in emerging market and developing economies.

Gopinath said the uptick is supported by a shift toward “a more accommodative stance” in central bank policies of the United States, the European Union (EU), Japan and Britain, coupled with China’s efforts to ramp up its fiscal and monetary stimuli, as well as a positive outlook for U.S.-China trade talks.

However, the WEO report cautioned about downside risks, which include trade tensions, no-deal Brexit, and significant financial vulnerabilities associated with large private and public sector debt in several countries.

As it expressed concerns about global economic outlook, the IMF revised up the 2019 growth projection for China to 6.3 percent, up 0.1 percentage point from its previous estimation in January, according to the latest WEO.

The forecast is consistent with China’s gross domestic product growth target of 6-6.5 percent this year, set in this year’s government work report released in early March.

“The outlook for U.S.-China trade tensions has improved as the prospect of a trade agreement takes shape,” Gopinath said.

As one of the highlights of the government work report, China’s pledge to reduce tax burdens and social insurance contributions of enterprises by nearly 2 trillion yuan (about 298 billion U.S. dollars) in 2019.

“I think the tax cuts will be very welcome,” said David Dollar, a senior fellow in the John L. Thornton China Center at the Brookings Institution.

Dollar said the massive tax and fee cuts are “smart” measures, which are expected to lower the price of some products, give more impetus to consumption and stimulate the economy.

“We have to revise our growth forecast due to more fiscal expansion. At the same time, the global economy has started to slow down, that actually has negative impact on that,” Rhee said, adding that the IMF made the latest projection taking into account both positive and negative factors.

Despite the gradual slowdown, China is expected to account for more than 30 percent of the global growth this year, Rhee said.

The materialization of the forecast rate would mean “record high” added gross domestic product, as the growth base becomes larger, Zhang said, noting that the IMF believes that the Chinese economy could continue to drive global economic growth as one of its major engines.

As the growth of the Chinese economy gradually slows down, experts believe that it’s natural and necessary.

Craig Allen, president of the U.S.-China Business Council (USCBC), said the Chinese government’s efforts to deleverage the economy and control the debt are “quite effective,” and that naturally would lead to “a bit of a slowdown” in the economy.

Chinese authorities have responded to the slowdown very quickly, using a combination of monetary policy tools and fiscal stimulus, and signs of recovery have been shown, Gopinath told Xinhua, citing the recent manufacturing data, or the Purchasing Managers’ Index as an example.

The IMF welcomes the Chinese government’s recent announcement of growth target in the form of a range, not a point target, Rhee said. “I think that is quite consistent with the authorities’ emphasis on the quality of growth rather than just maintain high quantity growth.”

Gopinath spoke positively of what the Chinese government has been doing to pivot away from high-speed growth to high-quality growth, noting that such a shift would require moving away from credit-driven and investment-driven growth towards more consumption-driven growth.

Lauding China’s pledge to continue opening up the country’s economy, Dollar said opening up more sectors would allow the entry of high-quality imports and also increase competition so that Chinese companies could improve, which would ultimately benefit China’s economic growth.

The Bloomberg Barclays Global Aggregate Index started including China’s yuan-denominated government and policy bank bonds in April, which is expected to attract foreign inflows into the Chinese bond market and foster a further opening-up of the country’s financial sector.

Non-resident capital flows into China reached 485 billion U.S. dollars in 2018, and are expected to grow by 90 billion dollars, or 18.6 percent in 2019, new data from the Institute of International Finance showed, indicating investors’ sustained interest in the Chinese market.

The IMF’s medium-term forecast sees a gradual slowdown in China “as internal rebalancing toward a private-consumption and services-based economy continues and regulatory tightening slows the accumulation of debt and associated vulnerabilities,” the report said.

The IMF projected a 6.1 percent growth rate for China in 2020, slightly down from the previous estimation of 6.2 percent.

“Our projection is for China to continue to slow somewhat, very gradually, but that’s needed, and that’s expected, given the size of the Chinese economy at this point,” Gopinath told Xinhua.