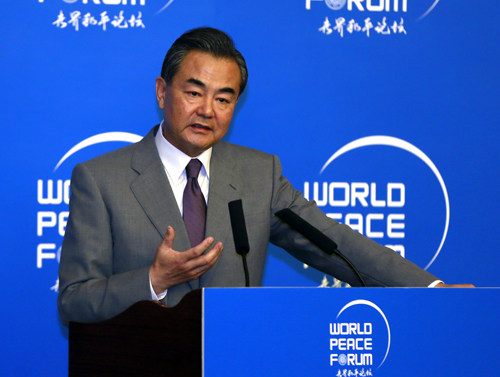 Wang put forward a five-point proposal at the fifth ministerial meeting of the Heart of Asia-Iatanbul Process, which is mainly focused on peace, security and economic development in Afghanistan.

The Chinese minister appealed for increased help and assistance to Afghanistan’s peace and reconstruction.

“The international community should earnestly honor its commitment to help Afghanistan build capacity for development and security on the basis of respecting its sovereignty, independence and territorial integrity,” Wang said.

China urged all factions in the war-torn country to restart the peace talks at an early date, and relevant countries in the process should continue to help create conditions for the resumption of talks between the Afghan government and Taliban, Wang said.

The parties concerned should also help Afghanistan enhance its capacity for independent development.

Wang said they should assist Afghanistan in boosting sustainable development by focusing aids on infrastructure, mine resources and personnel training.

Regional countries and the international community should stick to shared, comprehensive and sustainable security concept, support the capability building of the Afghan government on security and boost the exchange of counter-terrorism information as well as the management and control of border areas so as to jointly combat cross-border crimes and drug trafficking.

The international community should support and facilitate Afghanistan in such areas as transportation infrastructure, investment, trade, markets and tariffs.

“China welcomes the active participation by Afghanistan and relevant countries in the process in the Belt and Road initiative to prompt Afghanistan’s early integration in regional development, ” he said.

The Heart of Asia-Istanbul Process was established in 2011 at the initiative of Afghanistan and Turkey.

China was ready to provide support and assistance in its own way to Afghanistan based on its needs, Wang said.

It also provided an emergency relief to the Central Asian country when a 7.5-magnitude earthquake struck Afghanistan in late October and helped Afghanistan develop its infrastructure planning,  he said.

China was ready to facilitate and help build a platform for the revival of Afghanistan’s reconciliation process along with other countries, on the basis of respecting the sovereignty of Afghanistan and the will of various factions in the war-torn country, Wang said.

China supported the cooperation on confidence-building measures within the framework of the Istanbul Process, and has run three training programs in the fields of anti-terror, anti-narcotics, and disaster-management as committed at last year’s meeting in Beijing, he added.

With regard to security and development, China and Afghanistan are both stakeholders, Wang said.

“China is ready to work unremittingly along with the international community to help bring about long-lasting peace and common prosperity in Afghanistan and the whole region,” he said.