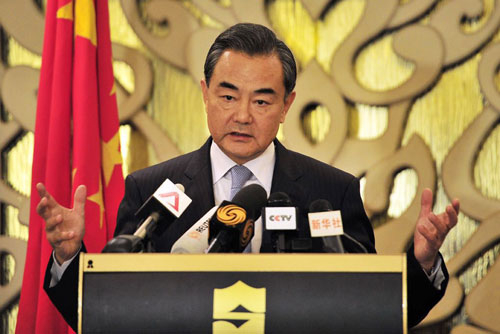 Firstly, making full preparation for the 25th anniversary of China-ASEAN dialogue relations next year, and setting 2016 as” Year of China-ASEAN Education Exchange.”

Secondly, formulating the 2016-2020 Plan of Action to Implement Joint Declaration on the ASEAN-China Strategic Partnership for Peace and Prosperity, highlighting the sense of modern times, inclusiveness and perspectiveness and exploring new fields of cooperation, said the Chinese foreign minister.

Thirdly, setting up a work group to negotiate on and sign the” Treaty on Good Neighborliness and Friendly Cooperation between China and ASEAN countries”to fix their friendship with legal means so that people of the two sides would have a more positive and optimistic expectation about China-ASEAN relations, he added.

Fourthly, launching operation on international production capacity and realizing complementary economic development of China and ASEAN as well as common prosperity. Wang said that the Chinese side would like to launch cooperation in production capacity, align the countries’development strategies, and realize win-win results based on different needs of ASEAN countries and on the basis of voluntariness, equality and mutual benefit.

Fifthly, China would like to see further advancement in connectivity with ASEAN. China is willing to discuss and sign the master plan on China-ASEAN connectivity to align ASEAN’s corresponding plans, Wang noted.

Sixthly, China will work with ASEAN to ensure that”the Year of China-ASEAN Maritime Cooperation”a success and bring new highlights to maritime cooperation between the two sides.

Seventhly, the two parties will also jointly promote the development of subregions by establishing the Lancang-Mekong River Dialogue and Cooperation Mechanism, according to the Chinese foreign minister.

This new mechanism, together with existing ones like the Greater Mekong Subregion mechanism, will complement and support each other so as to help narrow development gaps between ASEAN members and better boost the construction of the ASEAN Community, he said.

Eighthly, China calls for the early signing of the protocol to the Treaty on the Southeast Asia Nuclear Weapon-Free Zone, and the Chinese side holds a positive attitude towards taking the lead in signing the protocol.

Ninthly, China hopes to strengthen cooperation with ASEAN on defense and security, welcomes defense ministers of the 10 ASEAN states and its secretary general to attend the China-ASEAN defense ministers’retreat, which will be held in China in October for the first time.

Finally, China and ASEAN should join hands to safeguard peace and stability in the South China Sea by properly handling disputes, maintaining peace and boosting cooperation so as to create a win- win situation, said Wang.