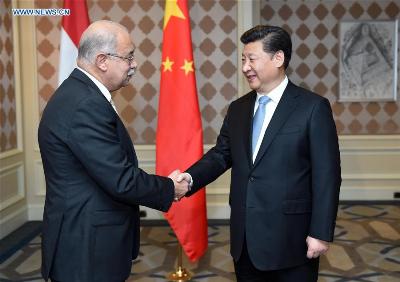 CAIRO, Jan. 21 (Xinhua) — Chinese President Xi Jinping started Wednesday his visit to Egypt, a country to which his last trip dates back to 16 years ago and which now looks forward to boarding the development train of the world’s second largest economy.

Xi’s visit is aimed at aligning the development plans of the two nations.

“My visit to Egypt is to cement and deepen the China-Egypt relationship in an all-round way, and advance practical cooperation between our two nations for new achievements,” Xi said when meeting Egyptian Prime Minister Sherif Ismail shortly after his arrival in Cairo in the afternoon.

He proposed that the two sides make more efforts to synergize their development strategies and step up cooperation within the framework of the Belt and Road Initiative, so as to translate their consensus into concrete results as soon as possible.

Prior to Xi’s visit, experts from both countries have agreed that as Egypt eyes a series of mega projects, the new Suez Canal for instance, to revitalize the economy, China’s experience could certainly help.

Words have already been put into practice. China Electric Power Equipment and Technology Co., Ltd said it had reached a deal with its Egyptian partner to build a 1,210 km power transmission line at 500 KV in the southeast of the Nile Delta in Egypt.

As the largest project of its kind in Egypt, the line will be used to transmit electricity for three gas-fired power plants and one nuclear power station, the company, which attended the China Science and Technology Exhibition in Cairo on Wednesday, told Xinhua.

Meanwhile, China’s CGC Overseas Construction Group is working to combine China’s agricultural technology, Egypt’s natural resources and global capital to help the North African country develop agriculture on the west side of the Nile, the company told Xinhua at the exhibition.

Egypt was the first Arab and African country to establish diplomatic relations with China, and this year marks the 60th anniversary of the establishment of their diplomatic ties.

The two sides, treating each other with mutual understanding, respect, trust and support, have been developing their ties in a healthy and stable manner, Xi said in his written remarks upon arrival.

Xi recalled the visit of Egyptian President Abdel-Fattah al-Sisi to China in December 2014 when Beijing and Cairo elevated their relationship to a comprehensive strategic partnership, saying that bilateral relations are at an important phase now, and the pair should well inherit their past traditions and break new grounds for the future.

Xi said he is happy to see that the Egyptian people are working hard to maintain social stability, develop the economy and better people’s livelihood.

“We believe that the people of Egypt, with their diligence and wisdom, can surely overcome difficulties and challenges, and continue to make progress in realizing the Egyptian dream of building a strong country in which people are better off,” he said.

To welcome the first visit of a Chinese president in 12 years, Egypt sent eight fighter jets to escort Xi’s plane when it entered the country’s airspace, and Sisi was also at the airport to welcome Xi.

When meeting with Sisi in the evening at Abdeen Palace, the main workplace of the Egyptian president, Xi also voiced China’s support to Egypt’s greater role in regional and international affairs.

Sisi told Xi that Egypt admires China’s development achievements and is eager to learn from China’s experience in many aspects.

Ismail also said Egypt cherishes its traditional friendship with China and will bolster cooperation with China in various fields.

Egypt supports the Belt and Road Initiative, will actively participate in the cooperation within such framework and become a corridor connecting trade between China and Europe, the prime minister added.

Meanwhile, the country’s official Al-Ahram newspaper in a special report of 20 pages on Wednesday recalled the historical moments in bilateral relations, and expected China and Egypt to sign an array of cooperative documents in such areas as small and medium-sized enterprises, agriculture, tourism, electricity and education during Xi’s visit.