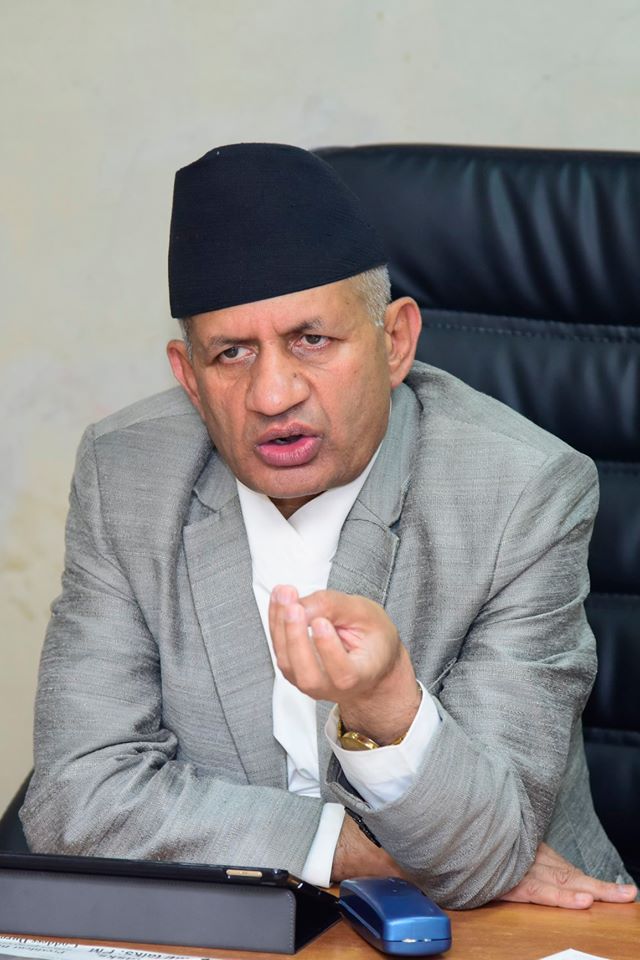 President Bidhya Devi Bhandari is leaving for China on a state visit on Wednesday (April 24). It will be the first state visit of the Head of State after the establishment of the federal democratic republic. As the Head of the State, the President is also participating in the Second Belt and Road Forum on International Cooperation.
After the formation of a stable government with two-thirds of majority in the parliament, the government is intensively engaging in various international forums and visits in order to improve the country’s image in the international arena and seek its lost space.

The government is trying to change the image of Nepal from a country of internal conflicts and political instability to a country of peace heading to become a country of a high and inclusive economic growth with immense investment potentials in various sectors.

The government has taken the state visit of President Bidya Devi Bhandari as an important event. This is not only the first state visit of the President, but also the visit of the head of the state after the establishment of federal republic. In the changed situation, it is the highest level visit from Nepal.
The visit will have two aspects. Firstly, it is related to the second Belt and Road Forum on International Cooperation in which Heads of State, Heads of Government and policymakers from more than 100 countries will have serious review of the six-year long journey of Belt and Road Initiative. It will also review and evaluate the progress and will make consultations to find a way to result oriented achievements for the common future of overall human beings as envisioned by Chinese President Xi Jinping.

We entered into the BRI by signing an agreement in 2017. Since then we are in continuous discussions. We have shared the schedules of the projects that Nepal is interested to develop under the BRI. Now we are in discussion to finalise the modalities for project financing, whether they will be developed under the grant of China government, loan assistance, and foreign direct investment of the Chinese companies or in other types of partnership.
As we are in the process of discussion on investment modalities there are slim chances of signing agreements in the major projects during the visit of the President. But letter of exchanges between the two countries can take place during the visit. During the visit, we will sign the protocol of Transport Agreement signed in 2016. Some other agreements are also ready for signing.

So far as the visit of President Xi to Nepal is concerned, we have already sent a formal invitation through the Chinese government. Nepal is heading towards a situation of political stability with its sole commitments to Prosperous Nepal, Happy Nepali, and it has given high priority to the relations with China for the achievement of its development target. In this changed scenario, we are fully convinced that the high level Chinese political leadership would visit Nepal in an appropriate time.

We have made a model template of BIPPA through the Ministry of Industry and Supplies and are sharing with our friendly countries for the discussion. We are in discussion with China for long, it is in priority during the visit and it may or may not be signed. Not only with China, we are in continuous discussion with other countries too for BIPPA-like agreements.

Investors seek assurances regarding the security of their investment, its return and repatriation of their return to their home country. We have made several efforts for the assurance of investors by making legal reforms. We have formulated Foreign Investment and Technology Transfer Act, Public Private Partnership Act and are in the process of formulating acts on Intellectual Property Right. One stop service for investors and other several attempts have been made to ensure security of foreign investors in Nepal. We will disseminate this information to the business communities of China to convince the Chinese business communities why and how Nepal is appropriate and safe country to invest.

Fortunately, an interaction between high level business delegation of Nepal and China is going to taken place during the time of visit on April 28 in China.

But when we became able to institutionalise the historic achievements of 70-year long movements in the Constitution and when the Constitution assured the rights related to democracy, inclusiveness and social justice, and the elections took place in 2017, through which we fulfilled the aspirations of the people to have a stable government. Its reflection has already been visible.

Invitation to Prime Minister KP Sharma Oli in Davos and his meeting with G20 leaders showed that international community had started hearing Nepal. It was an important event. Besides, the concerns of audience during the speech of the Prime Minister in the United Nations, international concerns in Asia Pacific Summit and Nepal Investment Summit organised by Nepal and various meetings with foreign delegates show that Nepal’s profile and fame are improving in the international region. But we have to do more.

Increasing concern over Nepal is usual. There has been a change in overall power balance in the world. Asia is currently becoming the centre of economic and political activities and population and innovation. Nepal is between the two big and dominant economies of Asia. In addition, Nepal has recently gone through a democratic transformation. In these regards, the increased concerns of the international community to Nepal are obvious and we respect it.

Nepal will not be aligned with any alliances that put our values at risk. Our involvement in international forum and campaigns will be guided by our development goal. That’s why we are participating in BRI.
Benefits from BRI

It is partially true that we have not been able to get benefits from the BRI. It was mainly due to our late entry into the campaign. Frequent changes in government also caused the delay in the selection of projects for BRI. During the period, negative notions also spread regarding the BRI led by China. Nepal is able to identify the national benefits.

Our concern is that we need a huge amount of foreign capital to meet the deficiency of capital in the country. We need an investment of USD 17 billion every year to graduate into the status of developing country by 2022. We have a deficit of around USD 6 billion investment every year. For this we have to attract foreign investment.

It is a relative aspect. It is true that the progress of public construction has been delayed. But changes have been seen in recent times. Completion of tunnel of Bheri-Babai project one year earlier than the set deadline and construction of runway of Pokhara International Airport three months prior to the deadline are examples. The construction of Kathmandu Terai Fast Track is also moving in an encouraging way.

To increase the efficiency of development projects we are going to make changes in Public Procurement Acts, regulations and procedures. Besides, we have to make contractors responsible and prepare technical experts for the implementation and monitoring of the projects. Now it is not true that we cannot spend USD 18 billion in a yea. Our capacity is increasing.

The tenets of foreign policy are same. We want to be linked with both neighbouring countries China and India. We want to learn from both of our neighbours. We should learn from the developmental growth of China. China had freed 80 million people from poverty in 40 years. Lately, India has made impressive achievements. India has become world’s sixth largest economy. The world should learn from it. Our main concern is tuning ourselves with the achievements made by our neighbours. It may be regional or worldwide ambitions. The geopolitical situation is our blessing. We must develop the common partnership with both the countries which would benefit all the sectors. The growing economic growth of China and India has made us enthusiastic.

Our mission is to mobilise both the neighbouring countries in economic diplomacy. We expect to have bilateral relations through cooperation. We have created country specific profiles, through which we are planning to create economic diplomacy and find out the possible way for the development of tourism, labour destinations and interest of labourers there.

First of all, we are happy that all our appointments of ambassadors remained non-controversial. The entire ambassadors were appointed through the mandatory process. We have improved the past weaknesses in terms of the appointment of the ambassadors.

Second, we organised training for the appointed ambassadors to make them ready to accomplish the task.

Discussions were also held with the appointed envoys for making coordination with the deployed countries on the issues of tourism and private sectors.
We are planning to operate the technologically equipped conference room at the Foreign Ministry so that we can have regular video conference with our envoys. We are working to make the ambassadors more effective and active.

The first year of the government

We are happy that we have established strong pillar of the federal democratic nation. We have formulated laws regarding 16 fundamental rights within the time as prescribed by the constitution.

We amended 62 laws which contradicted with the constitution. We formulated important long term acts to create an environment for the foreign investment.
In terms of law formulation, such initiation never happened in the history of Nepal. The works undertaken by the government will not bring about change in the lifestyle of the citizen right now. It will gradually show some changes.

Another progressive work done by the government in the past one year is that the 761 local governments were made capable to stand on their own and they have started working on their own.

Within a year, the country has formulated many laws for implementing federalism and employee adjustment.

We succeeded in maintaining a balanced foreign policy and sophisticated bilateral relationships.

Within the span of a year, some big projects are being constructed. These works have disseminated positive information. We are working in a steady pace for project constructions. All the rules and directions we have carried out are right. We have not forgotten the expectations of the government. We are thinking of making ourselves dynamic.

We have, however, expressed our dissatisfaction over the poor and prejudiced comments made against the government. The government is facing obstacles while talking about the ships and railways. The false idea that Nepal can do nothing and everything will remain the same is deeply rooted here.

Prime Minister KP Sharma Oli is paying visits to Vietnam and Cambodia in the second week of May to observe the rapid development of the two nations, which faced crisis like ours, made.