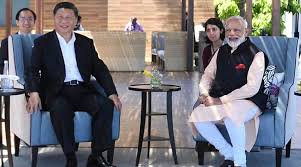 As major emerging economies and the only two countries in the world with a population of more than 1 billion, China and India boast great potential for cooperation.

With both sides facing new opportunities to fulfill their respective national goals to rejuvenate and the world undergoing profound changes unseen in a century, a healthy and stable bilateral relationship not only benefits both China and India, but also helps promote global stability and economic globalization.

Following the consensus reached by Xi and Modi during their first informal meeting in the central Chinese city of Wuhan last year, China and India have boosted pragmatic cooperation in various fields, providing a solid foundation for sustained cooperation.

In a relaxed and friendly atmosphere in Chennai, the two leaders exchanged in-depth views on issues of global and regional importance.

Bilateral trade has reached almost 100 billion U.S. dollars, and more than 1,000 Chinese companies have increased their presence in industrial parks and e-commerce in India, with a total investment of 8 billion dollars and 200,000 local jobs created.

As two ancient civilizations with thousands of years of history, China and India continue to move closer together. Yoga classes and watching Bollywood movies have become fashionable among Chinese youth. An increasing number of Indians are interested in Chinese acupuncture, cuisine and martial arts.

Next year will mark the 70th anniversary of bilateral diplomatic ties. As both leaders emphasized in their meeting, the two governments must take the anniversary as an opportunity to conduct broader and deeper cultural and people-to-people exchanges.

Beijing-New Delhi relations have now entered a new stage. The two sides should strengthen strategic communication and mutual trust in order to properly manage their differences and sensitive issues.

At their meeting in Chennai, Xi told Modi that realizing a scenario where the dragon and the elephant dance together is the right way forward for the two countries. It is also in the fundamental interest of the Chinese and India people. The world stands to benefit too.