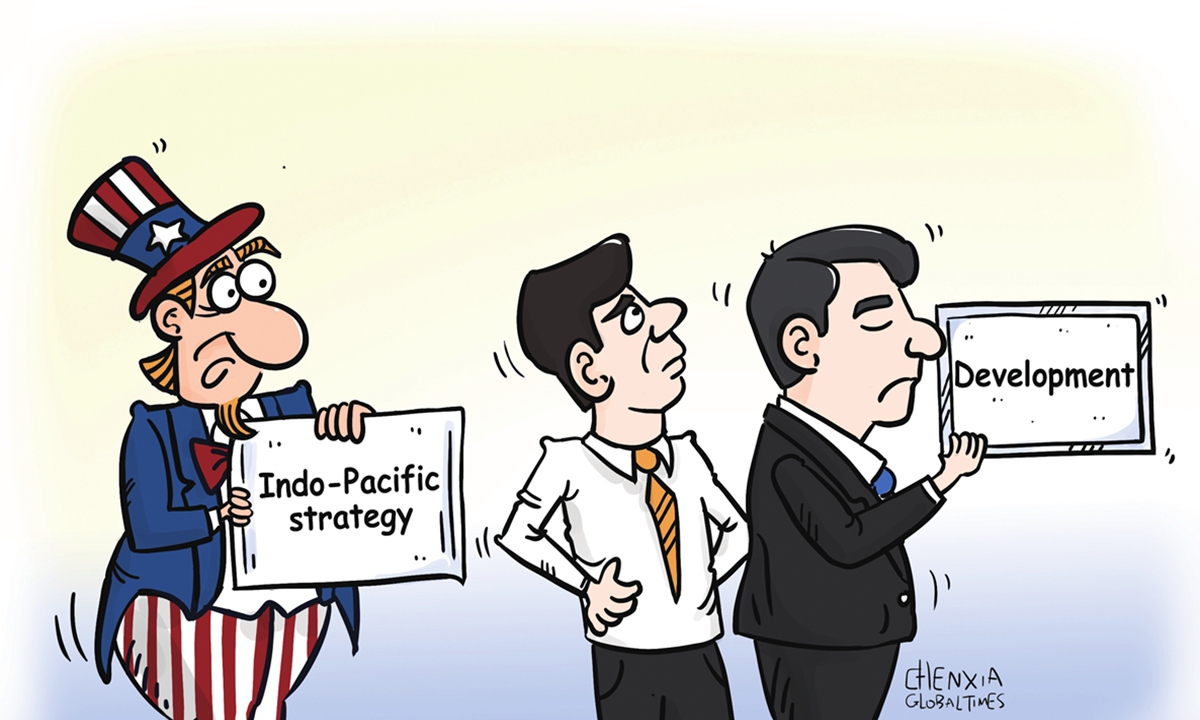 By Global Times (7 February 2022) – According to US media reports, US President Joe Biden is preparing to unveil his administration’s first broad economic strategy for the Asia-Pacific region. It is called the “Indo-Pacific Economic Framework.” The Biden administration has pinned high hopes on this framework, and expects to use it to fill in the gap in its absence in a comprehensive trade agreement in the region, making up for the shortcomings of the Indo-Pacific Strategy in the economic and trade field. However, the most important thing for Washington is to form a small economic and trade circle that excludes China, and fight against “China’s expanding influence in the region.”

It must be said that the US is daydreaming. According to reports, the Indo-Pacific Economic Framework focuses on building digital trade rules, reshaping regional supply chains, and establishing green technology standards to siege China in key sectors in the economic and trade field, and further reinforce Asia-Pacific countries’ dependence on the US. This will ensure the US’ dominant position in the global supply chain. Instead of saying that the Indo-Pacific Economic Framework is a new platform to serve the economic development of the Asia-Pacific region, one might as well say that it is a new weapon to serve US geopolitical goals.

To manipulate this “new weapon,” Washington has done a lot. Last year, senior Washington officials took turns to visit Asia-Pacific countries. They came to peddle the framework before it was officially formed. At a time when the Ukraine issue is on the verge of breaking out into a fight, US Secretary of State Antony Blinken will visit Australia from Monday, attend the fourth Quad Foreign Ministers Ministerial Meeting among the US, Australia, India and Japan, and then go to Fiji to meet with Pacific Island leaders. Washington acknowledged that the trip relates to “the challenges that China poses.” People can thus anticipate that his trip will be an advertising campaign for the Indo-Pacific Economic Framework.

Driven by the zero-sum Cold War mentality, Washington regards the friendly cooperation and normal exchanges between China and other countries as a fire emergency. It is attempting to put out the fire in a hurry-scurry and uneasy manner. The Biden administration has come up with a big move, trying to cut the economic and trade exchanges between China and Asia-Pacific countries abruptly, and to build a wall from a crevice, to solve the problem once and for all. But the reality in the Asia-Pacific is chilly for the US. Today, when economic globalization is developing, it is unimaginable to build a wall to exclude the world’s largest trading power. This goes against the true wishes of Asia-Pacific countries and does not conform to their vital interests. No matter how extravagantly Washington talks, the undertone of the Indo-Pacific Economic Framework is closed, exclusive, and America First-driven. It runs counter to multilateralism and free trade, and at best is like a Thanksgiving dinner without turkeys. The other players are nothing more than vassals in the US-dominated supply chain. Everyone is clear about this.

On the comprehensive economic and trade agreement, the US has already played around with its allies once. The Obama administration vigorously pushed for negotiations on the Trans-Pacific Partnership (TPP), but it was shelved by the US after other members had gone through legal procedures. Donald Trump walked out of it as soon as he took office, leaving US allies stunned. Japan wants to invite the US to rejoin, but the Biden administration started its own and came up with the Indo-Pacific Economic Framework. While the US is capricious on major issues, how can it be trusted by others? Unless the lackeys like to be played with.

Washington’s understanding of “competition” has long deviated from the original intention of “progress.” The US seems to have done a lot of things in the name of “competition” in recent years, but the result is basically having messed things up while consuming resources. That’s because it does not understand the path to development. Past experience has proven that no economy can achieve sustained growth amid isolation and exclusion. On New Year’s Day this year, the Regional Comprehensive Economic Partnership (RCEP) came into effect and all US allies in the region participated, which shows that win-win cooperation is the choice of the times.

Against this backdrop, Washington still wants to use brute force to pull the wheel of the time backward, but it doesn’t know that it will only make itself stumble in the end. We can conclude that even if the US finally puts up the Indo-Pacific Economic Framework, it will eventually turn out to be another mirage the US creates for its allies.