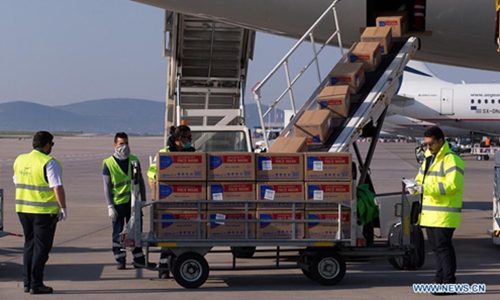 Global Times (29 March 2020) – one of the first countries to get the COVID-19 outbreak under control, China has become one of the main suppliers of medical supplies urgently needed to combat the global pandemic. However, more than one European country recently claimed that Chinese products failed to meet quality standards. The Dutch government Saturday ordered a recall of hundreds of thousands of masks imported from China and had distributed to hospitals, saying they were not up to standards. Some Western media outlets apparently made sensational reporting, tending to politicize the issue.

Views expressed on the Chinese internet held that China is doing a hard but thankless job to assist Western countries in containing the epidemic and if it ends up with lawsuits about product quality, it’s better we stop what we are doing.

We believe in the face of quality disputes, calmness is required and both sides shouldn’t exaggerate the issues. Politicizing this kind of dispute could jeopardize cooperation in the virus fight and should be avoided in any case.

It’s self-evident that quality problems with medical products would cause more concern than products in other fields. Theoretically, there is a possibility that some of China’s aid and exported medical goods don’t meet standards. Foreign orders are large and urgent, but not all Chinese manufacturers specialize in this industry. Some have been temporarily converted to production. Coupled with the fact that standards in different countries are inconsistent and it’s hard to coordinate at such a critical juncture, the issue has become particularly complicated.

China must strictly demand medical suppliers ensure quality and quantity and that no enterprise be allowed to put profits above social responsibility and morality. When other countries question product quality, we should, first of all, make relevant investigations. Enterprises involved must be severely punished, or prosecuted, should quality defects really exist. We will never cover up for them or give them opportunities to evade responsibilities.

Ensuring the quality of medical supplies, be they foreign assistance or commercial exports, under the current circumstances concerns people’s life and also is of great importance to the reputation of “Made in China” and even China as a whole. Anyone who tarnishes that reputation will not be tolerated.

Therefore, it’s suggested the country strengthen management of medical supply exports, enterprises be urged to take orders, produce and export in a more responsible manner so that defective products are destroyed within China and all materials shipped to the frontline of the coronavirus fight have superb quality. Disqualified medical products should not be allowed to be sold regardless of whether they are for domestic or foreign markets.

Governments and media of other countries should maintain a rational attitude when they assume a quality problem in China-imported medical products. They shouldn’t exaggerate the issue or hype the “Made in China” label on purpose to stimulate public opinion. It’s immoral to do that.

As the whole world urgently buys from China, omissions may still occur even under tightened Chinese management. China is making active efforts to supply products to relevant countries out of great goodwill. The importers should also deal with disputes with reciprocal goodwill. If public opinion in relevant countries makes a big deal of the quality disputes, this could easily be seen as deliberate provocation by the Chinese public.

It’s hoped countries import medical products from reputable Chinese companies. As far as the Global Times knows, some foreign governments are reluctant to choose importers from the list of trustworthy companies recommended by Chinese embassies, worrying there may be State-owned enterprises. Instead, they are more willing to directly contact Chinese companies themselves. They shouldn’t make rush decisions in case they purchase inferior products from disqualified companies, triggering a public opinion spat and disrupting epidemic control cooperation.

China has controlled the epidemic situation mainly by relying on its own produced medical materials. The Chinese products are undoubtedly reliable. Otherwise, there wouldn’t have been so many countries placing orders with China. If there is any problem, let’s solve it together.