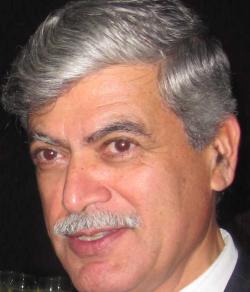 By Dr. Shambhu Ram Simkhada (KATHMANDU, June 24) – Four of us, two Nepalese, one Chinese and a German were on the fourth “T” of the Gokarna golf course near the famous Budhanath Stupa in Kathmandu valley. It was my turn to T off first. I was about to hit the ball when the 7.8 Richter scale mega earthquake struck few minutes before noon (11.56). Its epicenter was at Barpak village of Gorkha district but its tremors were felt all the way in Delhi, India and Tibet, China.

Just before the earthquake struck I felt rumbling under the hillock and the earth started shaking violently. We stood around hoping it would stop. One of the players fell on the ground. So we all sat down. Houses outside the course started collapsing, dust rising and we heard cries of people. The sprawling open space of the golf course was the best place one could be during such a disaster. Even then for some time we were at a loss what to do.

Keen golfers are so attached to the game that  some wives take it as their rivals. When I asked my friends whether we should stop, one of them said “let us finish this hole”. But, even after several minutes, my golf ball would not stay on the T. I checked and found my T was okay. As the tremors continued we finally decided to walk to the club house.

Others had already arrived at the club house from different directions. Somebody had told the club Director that there was going to be another big jolt at 3 to 4pm. So, he advised us to wait. Many of us had experienced earthquakes but they were nothing compared to this one in intensity and length of time, 57 seconds. With aftershocks continuing it was difficult to decide what to do.

To make the best of this scary situation while waiting everyone was looking for some drinks and snacks. But who would venture inside? The light structures of the club house and restaurant were standing but everything inside had fallen off the shelves. Scared workers had gathered outside. One of them asked me “what is happening sir? Is this the end of the world? Are we all going to die?” I tried to reassure him that we are all safe and the tremors would soon stop. Meanwhile some players ventured in and got some drinks, peanuts and cookies. We spent four hours talking about many things.

Around 4 pm I called a senior police officer friend who told me the roads were clear. So, I left for home via the Bagmati corridor, Mitra park and the ring road. One scared gardener had asked me for a lift. I dropped him near Pashupatinath temple as he said he lives near the airport. Driving up the hill  towards Chabahil everything seemed normal except there were not many cars, streets were filled with people. So, I maneuvered through the agitated crowds and sped along the ring road to Bansbari.

After the quake everyone started contacting their families. My wife Bindu had the good sense  to call me soon after the quake. I immediately sent SMS to my daughters. I did not get response from my mother. So, I called my brother to rush to my sister’s place. He soon called me back saying they are fine.

It was so nice to embrace Bindu after reaching home. In our eventful journey of life and expedition of diplomatic mountain climbing we have gone through too many ups and downs, twists and turns, some triumphs and many tragedies. The aftershocks of this mega earthquake is one more we are enduring together.

After our immediate family, we tried to find out about relatives and friends. Fortunately the net was working. So, we kept updated through email, face book, LinkedIn and Twitter. In the late 1960s I lived in Kathmandu as a student without any communication with my family for the three monsoon months. So, I feel the IT revolution is the best blessing of science.

We spent three days and nights at the makeshift shelter in our garden, occasionally visiting people in the neighborhood. For some days we did not venture out far and just went around the neighborhood observing the spontaneous show of self help, solidarity among the Nepalese helping each other. There was no caste, creed, region or religion. Now that we have moved inside and the net is back we are busy replying to messages of concern and good wishes from well wishers around the world. My replies to them all is “I and my family are safe but Nepal is in pain”.

The death toll has crossed 8000 and over 17,000 have been injured. The physical devastation is massive and the psychological trauma is incalculable.  Darkha VDC of Dhading district where I was born and grew up has suffered 48 deaths, many more injured and almost 90% of the 1,150 households and nine schools, including the Ganeshkunda, the only  Higher Secondary in the village, built below the Majha chautara (open platform under trees where I first started my journey of learning), has been destroyed.

Other people used to tell us about the mega quake of 1934 and we ourselves experienced the earthquake of 1989. We have also seen and read about the earthquakes hitting other parts of the world. But to live through a mega earthquake, see the death and destruction, feel the pain of so many who have perished, are wounded and crying for help is a whole new trauma about which we will have to tell others.

Bindu and I have learnt to take things as they come and will also go through this trauma and tell our own stories of how we managed. As I go to the most affected areas to share relief materials and help in ways I can, the real pain I feel taking about the current tragedy is of those hungry and sick Nepalese facing the brunt of unseasonal rain while seeking shelter under open sky, digging the rubbles of collapsed houses for the bodies of  loved ones. Sometimes, why are even Gods so cruel? Paradoxically, the smile of the people even after so much hardship and devastation also gives hope and inspiration.

At the golf course news started coming from outside. The collapse of the Dharahara pinched me the most. This earthquake has destroyed not just the mud houses of rural Nepal, many important historical monuments and present day landmarks but also affected Nepal’s most important natural identity, the mountains including the most majestic Mt. Everest. But forecasts of hundreds of thousands dying did not come true. Thank God, the airport and highways were unaffected and thanks to our professionals, services like telephone, water, electricity were not disrupted.

Our security forces were heroic. Response of the international community was extraordinary. The way Nepalese living abroad responded meant “wherever they may be, they are Nepalese at heart”. I felt so good to be part of the relief effort together with the “Darkhali samaj UK” founded by my compatriots from Darkha now living in the UK.

Mother Nature has been so kind to have created this enchanting land of natural beauty and bio-diversity. In it live simple, tolerant and hard working people of  many culture, religion and tradition. But this land has been a heaven for a few hardship for most. This earthquake has been a great leveler affecting everyone but those living in hardship have been devastated the most. It is for them that reconstruction must be targeted first.

Reconstruction must take many things into account. Most importantly, it must conceptualize a new paradigm of eco friendly economics and politics at peace with the past. If the Nepali wisdom fails to comprehend that the quake has shaken our weak present built on destroying nature and basking on or boxing with the glory of the past, our future could be at an even greater risk.

I grew up playing Gir and I now play Golf. The difference is, in Gir, played in Nepalese villages, the bamboo knot is the ball and branch of a tree is used as the club to drive the ball forward. From gir to golf I have witnessed the world, Asia, South Asia and Nepal, all in transition. Experience of this long journey of ups and down in life and triumph and trauma in my expedition of diplomatic mountain climbing tell me that this earthquake caused by the movement of the Tibetan (Eurasian) and Indian plates has pushed Nepal to yet another cross roads of history and geography. As I return to play at the charity tournament organized to help the caddies and other staff of the golf club who have suffered in the quake, the April 25, 2015 earthquake will remain yet another unforgettable memory.

Shambhu Ram Simkhada, Nepal’s former PR to the UN and Ambassador to Switzerland, member of the Nepal Army and Gokarna Golf Clubs of Kathmandu, can be reached at: [email protected]