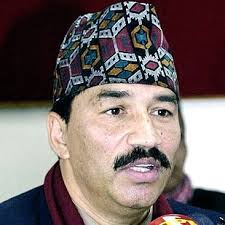 After assuming office on Monday at the Ministry of Foreign Affairs, Minister Thapa said resolving the problems relating to transport facilities facing the country through diplomatic efforts would be his first priority.  Nepal has been facing  undeclared blocked from Indian government expressing dissatisfaction over the promulgation of New Constitution of Nepal.

Minister Thapa applauded the the ministry’s contribution to the protection and promotion of country’s independence and sovereignty.

He pledged his best to make the role of diplomatic missions significant and boost up the morale of employees’ diplomatic services.

Minister thapa was welcomed by Foreign Secretary Shanker Das Bairagi and his deputies.

The Ministry has got an experienced personality in Nepali politics and an expert on foreign affairs, Bairagi said.

Thapa, the Chairman of Rastriya Prajatantra Party (RPP) Nepal was born in 2012 BS in Makawanpur. He had already served as the minister for home, foreign affairs, forest, health and population, law, physical planning, and information and communications at different times before this. This is the second time he is heading the Ministry of Foreign Affairs after 17 years.