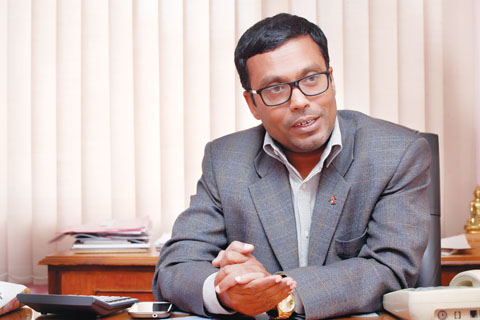 Madhesh agitation and border blockade has adversely affected Nepal’s business and industry sector. Pashupati Murarka, President of Federation of Nepalese Chambers of Commerce and Industry (FNCCI), discussed with us problems and solutions.

How is the current situation of business?

Continued unrest in Tarai has adversely affected vehicular movement across the country. In some places, vehicles can only be operated under police escort. Although situation has eased in most places, border crossing remains closed in Birgunj, which is the major customs point of the country and where major industries are located. The goods imported from other customs points are not enough to meet the demands. Shortage of petroleum products continues. So industries have not been operating normally.

What is the status of capacity utilization of industries at the moment?

I don’t think industries are operating over 40 percent of capacity. At a time when blockade has created the shortage of raw materials, industries are also facing longer hours of power cuts. Operating them with generator has not been possible due to lack of fuel as well as high costs involved in fuel purchase.

Rescheduling of loans only defers the problem. It is not easier to recover losses incurred by the industries over the last six months. They have to pay loan and interest in later dates anyway.

Banks claim they are getting good repayment from business sector. Does it mean industries are not affected as much as it is claimed?

Big business houses are engaged in multiple businesses. So they may be able to pay loan of one business from other. But small businesses whose transaction is less than Rs10 million, have been hit the hardest. They have been forced to pay demurrage fee of over Rs one million for a single container. It takes away all the profit they may make in a year. Since banks have rescheduled loans, banking sector may not have felt adverse impact of blockade at the moment. But they will feel it in the later days.

Team of FNCCI members had also gone to Kolkata to settle demurrage issue. What is the progress?

We held talks with shipping companies there. The demurrage charge has increased four times the price of a container. A container is available at the price in the range of Rs 200, 000 to Rs 300,000. But demurrage fee has increased up to Rs 1.5 million. We asked them not to charge more than the cost of the container. They seem more flexible now than in the past. It may take some time to sort it out but I hope a solution will be found soon. We have told them if they give concession now they will get more business opportunities from Nepal.

The government had also taken an initiative for waiver on demurrage charges. What happened?

I can’t tell whether government initiative in this regard will be effective enough because it has basically to do with private companies. Shipping companies are private companies from the third countries. We have to pay them based on contractual obligation.

Meanwhile, the government has also formed a rehabilitation fund to help industries. How optimistic are you?

As per government regulation, industries making less than half of production will get interest subsidy of 4 percent up to Rs 100 million and 2 percent in case of loan above that amount. This has given good message. It has made a provision for business sector to receive refinance facility at lower interest rate. Size of the fund is as big as Rs100 billion. This will certainly create a good environment. We know that the government cannot fully compensate us. Yet it is not enough.

It is said business community itself is abetting black marketing.

There are two sides to it. First, the biggest black marketing is taking place in the petroleum products which is handled by the government agency. As far as industrial production is concerned, the cost has increased because of demurrage charge. Costs of raw materials have gone up which resulted in higher prices of goods. You cannot call it a result of black marketeering. Second, entrepreneurs can fix prices of the goods in open market economy. I admit that there has been unnatural hike in prices of goods. This won’t behoove well for the image of business community.

Many blame India for this crisis. How do you think it can be resolved?

Yes, there is problem with India. But we need to keep our house in order first. We need to move forward by addressing the concerns of agitating Madhesh-based parties. Once we resolve internal problems internally, all other issues will be resolved. Again let us not forget that this is a political problem. We have pressured both the government and the agitating parties to reach a consensus. We asked the agitating parties to change the form of protest. We have asked the government to ensure law and order so that we can operate industries freely and fearlessly.

FNCCI itself is said to be divided over how to view economic blockade. Is that the case?

That’s not true. We have uniform stand on blockade issue. We are firm in our stance that suitable environment must be created for smooth operation of industries and trade.

Do you think China can provide alternative route for Nepal’s international trade?

China is no alternative of India and vice-versa. But we need to open more border points to China not just because of current blockade. They should be up and running even during the normal times.