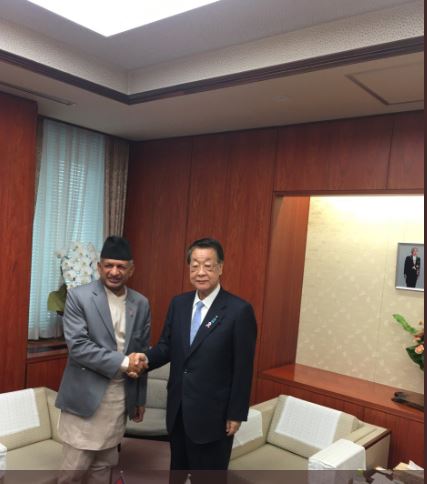 On the occasion Foreign Minister Gyawali shared with his Japanese counterpart about the political gains achieved by Nepal and priorities of the Government of Nepal for economic development of the country. He requested for the Japanese assistance in the priority sectors such as development and modernization of agriculture, energy, infrastructure development, tourism and human resource development. The Foreign Minister also requested the Japanese side to facilitate for early operationalization of direct flights of Nepal Airlines between the two countries, to support in making the Visit Nepal Year 2020 successful, open the Japanese labor market for Nepali people and encourage the Japanese investors to invest in Nepal.

The Japanese Foreign Minister assured of the continuity of the Japanese assistance to Nepal. He also assured of the Japanese government’s full support on realizing the goals of “Prosperous Nepal, Happy Nepali” including in the sectors of infrastructure development and connectivity, poverty reduction, development of agriculture, transfer of technology, climate change and disaster mitigation.
The two Foreign Ministers witnessed the signing of Exchange of Notes for grant assistance of 350 million Yen to the Government of Nepal for carrying out the food assistance programme in Nepal as well.

Earlier Monday , the Foreign Minister met with Minister for Agriculture, Forestry and Fisheries Takamori Yoshikawa. During the meeting, the Foreign Minister thanked the Government of Japan for its assistance in agricultural sector of Nepal and requested for further support and cooperation in development and modernization, market development and value chain in agriculture sector. He also requested for Japanese cooperation to encourage Japanese investors to invest and transfer of technology in organic farming. The Japanese Minister for Agriculture, Forestry and Fisheries assured of enhanced level of Japanese government’s support as per the need in agricultural sector of Nepal.

The Foreign Minister also had a meeting with Mr. Toshihiro Nikai, the President of Nepal-Japan Parliamentary Friendship League and Secretary General of Liberal Democratic Party today. While highlighting the role of Parliamentary groups in strengthening bilateral ties, the Minister stressed on the need of exchange of visits between the parliamentarians of the two countries. Mr Nikai assured of the continuity of Japanese support to Nepal. On behalf of the Federal Parliament of Nepal, the Minister extended a cordial invitation to. Mr. Nikai to visit Nepal. On the occasion, many members of the Japan-Nepal Parliamentary Friendship League were present.

Also today, the Foreign Minister had a meeting with the President of JICA Dr. Shinichi Kitaoka. During the meeting, Minister Gyawali thanked for the contribution made by JICA in socio-economic development of Nepal and for its humanitarian assistance. He requested the JICA to support Nepal in development and modernization of agriculture, energy, infrastructure development, tourism and human resource development for achieving economic prosperity in Nepal. The President Mr. Kitaoka assured of JICA’s continued assistance in the ongoing projects and other priority projects of Nepal.

The Foreign Minister also attended a welcome luncheon programme organized by Japan-Nepal Society in his honour. While addressing the progamme, he thanked the Society for its support in promoting the interest of Nepali community in Japan, the Minister urged the society to act as bridge between Nepal and Japan to further enhance people to people contacts between the two countries and promote Japanese investment in Nepal. While speaking in the programme, the Parliamentary Vice-Minister for Foreign Affairs of Japan, Mr. Norikazu Suzuki assured of Japan’s continued support to Nepal. The President of Japan-Nepal Society Mr. Mitsuaki Kozima expressed Society’s continued support to enhance the people to people relations between the two countries and promote the interest of Nepali community in Japan.