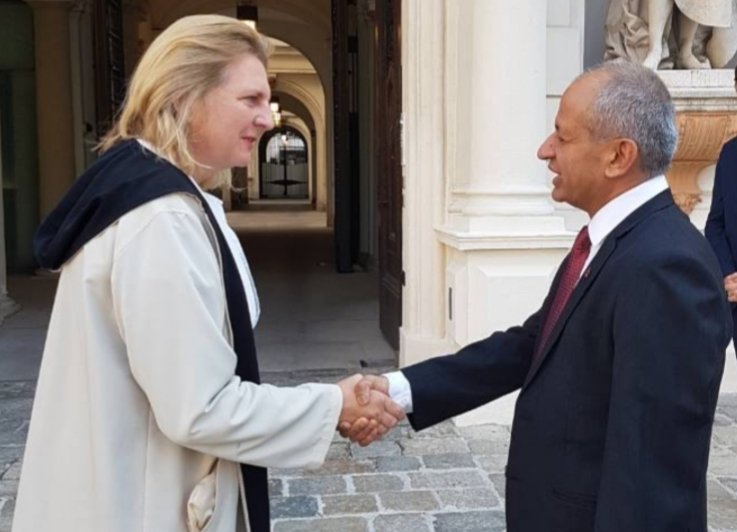 Diverse issues of Nepal-Austria relations were discussed in the meeting. The two Foreign Ministers reviewed the status of bilateral cooperation and deliberated on the ways of enhancing such cooperation in areas such as trade, investment, tourism, heritage conservation, water management as well as people-to-people contacts. They agreed on the need to intensify bilateral contacts as the two countries would observe the next year as the 60th year of the establishment of bilateral relations.

Minister Gyawali shared with his Austrian counterpart the major development priorities of the Government of Nepal and expressed hope that the economic linkages between Nepal and Austria would further expand in the days ahead. Austrian Minister Kneissl highlighted the Austrian Government’s foreign policy priorities with regard to Asia and stated that Austria would continue to support Nepal’s development efforts.

The two Foreign Ministers also expressed satisfaction over the existing cooperation between the two countries in multilateral forums and agreed to continue working closely in the issues of mutual interest.

Also present in the meeting were Prakash Kumar Suvedi, Ambassador of Nepal to Austria, Ghanshyam Bhandari, Joint Secretary and Head of Europe-America Division at the Ministry of Foreign Affairs and Baliram Prasad Dhami, Second Secretary at Embassy of Nepal in Vienna. From the Austrian side Ms. Gabriele Meon Tschurtz, Head of Asia, Australia and Oceania Division and Mr. Stephan Heisler, Head of the Strategy Unit of the Cabinet of the Minister participated in the meeting.