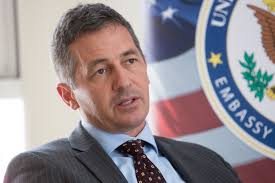 KATHMANDU (23 May 2019) – The announcement was met with concern from political commentators and a number of Members of Parliament who asked if such a programme violated diplomatic norms and codes of conduct.

Foreign Secretary Bairagi told the Post that he had had a cordial meeting with Ambassador Berry, where both sides spoke about bilateral ties. Though Bairagi did not confirm whether he had asked Berry to ‘step back’ from the programme, two Foreign Ministry sources familiar with the meeting told the Post that Bairagi had indeed asked the US envoy to refrain from his planned interaction.

Foreign Minister Pradeep Gyawali, too, said that Nepal’s position was clear when it came to the ambassador’s plans.

“We have asked [the ambassador] to step back from the planned interaction because the US ambassador does not require such an interaction,” Gyawali told the Post. “On the basis of set international practices and as per the Vienna Convention, a serving ambassador cannot hold social media interactions that may trigger controversy and create unnecessary problems.”

The US embassy, on Sunday, had posted on social media, saying that Ambassador Berry enjoys interacting with all those who follow the US embassy’s pages on social media, but he would probably never meet all four million of them. “…so I am beginning ‘Rajdoot Sanga Guff Gaff’ to hear from and answer questions from you all. Stay tuned!” the post had said.

However, when asked to comment on the meeting between Bairagi and Berry, the US Embassy stated that “a core function of diplomacy is to engage with people, understand them and their priorities, and build connections with them. We have been doing this in Nepal for 72 years; it is what diplomats do, it is who we are.”

Ambassadors are entitled to write opinion pieces on newspapers, give interviews, interact with the political, business and media fraternities, and also meet with the general public. But there is no consensus on whether or not diplomats can hold social media interactions with the public. On social media, some welcomed the ambassador’s initiative while others expressed concern.

“Diplomatic activism of foreign ambassador increases when the government does not sufficiently engage and brief them on the recent developments. So the rule is: keep them engaged or they will find themselves ways to be engaged!” wrote former foreign secretary Madhu Raman Acharya on Twitter.

As soon as social media started asking questions, the Foreign Ministry began internal consultations, said minister Gyawali. The decision to ask Ambassador Berry to refrain from the planned initiative was taken after assessing international practices and diplomatic norms like the immunities and privileges of an ambassador, he said.

“There are other methods and models that an ambassador can use to communicate with the people,” said Gyawali.

Another senior Foreign Ministry official said that Nepal needs to look into whether the US administration allows ambassadors from other countries to host such interaction programmes in Washington, DC.

The official also raised a question that some on social media have been asking—who will we hold responsible if ambassadors from other countries like India and China initiate similar programmes and make controversial statements on sensitive issues?

Though there is no official word from the US Embassy on why it felt the need to interact with Nepali citizens through social media, sources in the US Embassy in Kathmandu said that the interaction programme does not violate diplomatic decorum and will refrain from commenting on sensitive political and geopolitics issues, and will focus on various soft issues, like how the US engages in Nepal, the strengthening of US-Nepal ties, and the various facets of its ties with Nepal.

“So many people have questions for the Ambassador or want to meet him but that is not always possible. This is a way to connect with people across Nepal,” said Andie DeArment, spokesperson for the US embassy, on Twitter.

DeArment, however, clarified to one Twitter user that the practice was as per diplomatic norms and practices. “Public diplomacy is literally talking to people. He is answering questions. Giving information. That is diplomacy,” she wrote.