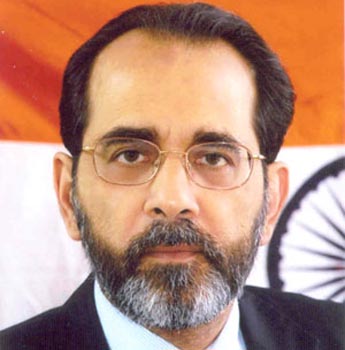 By Rakesh Sood (NEW DELHI, 11 June 2019) – As Prime Minister Narendra Modi begins his second term, the world looks more disorderly in 2019 than was the case five years ago. U.S. President Donald Trump’s election and the new dose of unpredictability in U.S. policy pronouncements; the trade war between the U.S. and China which is becoming a technology war; Brexit and the European Union’s internal preoccupations; erosion of U.S.-Russia arms control agreements and the likelihood of a new arms race covering nuclear, space and cyber domains; the U.S.’s withdrawal from the Iran nuclear deal and growing tensions between Saudi Arabia and Iran are some of the developments that add to the complexity of India’s principal foreign policy challenge of dealing with the rise of China.

As in 2014, in 2019 too Mr. Modi began his term with a neighbourhood focus but redefined it. In 2014, all South Asian Association for Regional Cooperation (SAARC) leaders had been invited for the swearing-in. However, the SAARC spirit soon evaporated, and after the Uri attack in 2016, India’s stance affected the convening of the SAARC summit in Islamabad. Since an invitation to Pakistan was out of the question, leaders from the Bay of Bengal Initiative for Multi-Sectoral Technical and Economic Cooperation (BIMSTEC) countries (Bangladesh, Bhutan, Nepal, Sri Lanka, Myanmar and Thailand) with Kyrgyzstan, added as current Shanghai Cooperation Organisation chair, highlighted a new neighbourhood emphasis.

Yet Mr. Modi will find it difficult to ignore Pakistan. A terrorist attacks cannot be ruled out and it would attract kinetic retaliation. Despite good planning there is always the risk of unintended escalation as Balakot (this year) and the downing of an Indian Air Force (IAF) MiG-21 showed. In the absence of communication channels between India and Pakistan, it appears that the U.S., Saudi Arabia and the United Arab Emirates played a role in ensuring the quick release of the IAF pilot, Wg. Cdr. Abhinandan Varthaman, thereby defusing the situation. Unless the Modi government wants to outsource crisis management to external players, it may be better to have some kind of ongoing dialogue between the two countries. This could be low-key and discreet, at whatever level considered appropriate, as long as no undue expectations are generated. A policy in-between diplo-hugs and no-communication provides both nuance and leverage.

Relations with countries on our periphery, irrespective of how we define our neighbourhood, will always be complex and need deft political management. Translating India’s natural weight in the region into influence was easier in a pre-globalised world and before China emerged in its assertive avatar. Today, it is more complex and playing favourites in the domestic politics of neighbours is a blunt instrument that may only be employed, in the last resort; and if employed it cannot be seen to fail. Since that may be difficult to ensure, it is preferable to work on the basis of generating broad-based consent rather than dominance.

This necessitates using multi-pronged diplomatic efforts and being generous as the larger economy. It also needs a more confident and coordinated approach in handling neighbourhood organisations — SAARC, BIMSTEC, the Bangladesh, the Bhutan, India, Nepal Initiative, the Bangladesh-China-India-Myanmar Forum for Regional Cooperation, the Indian Ocean Rim Association. This should be preferably in tandem with bilateralism because our bilateral relations provide us with significant advantages. With all our neighbours, ties of kinship, culture and language among the people straddle boundaries, making the role of governments in States bordering neighbours vital in fostering closer linkages. This means investing attention in State governments, both at the political and bureaucratic levels.

Managing China and the U.S.

China will remain the most important issue, as in 2014. Then, Mr. Modi went along with the old policy since the Rajiv Gandhi period that focussed on growing economic, commercial and cultural relations while managing the differences on the boundary dispute through dialogue and confidence-building measures, in the expectation that this would create a more conducive environment for eventual negotiations. Underlying this was a tacit assumption that with time, India would be better placed to secure a satisfactory outcome. It has been apparent for over a decade that the trajectories were moving in the opposite direction and the gap between the two was widening. For Mr. Modi, the Doklam stand-off was a rude reminder of the reality that the tacit assumption behind the policy followed for three decades could no longer be sustained.

The informal summit in Wuhan restored a semblance of calm but does not address the long-term implications of the growing gap between the two countries. Meanwhile, there is the growing strategic rivalry between the U.S. and China unfolding on our doorstep. We no longer have the luxury of distance to be non-aligned. At the same time, the U.S. is a fickle partner and never has it been more unpredictable than at present.

In 2014, Mr. Modi displayed unusual pragmatism in building upon a relationship that had steadily grown under the previous regimes, after the nuclear tests in 1998. The newly appointed External Affairs Minister, S. Jaishankar, had played a key role as the then Ambassador in Washington. Later, as Foreign Secretary, he successfully navigated the transition from the Obama administration to the Trump administration while keeping the relationship on an upward trajectory.

Despite this, a number of issues have emerged that need urgent attention. As part of its policy on tightening sanctions pressure on Iran, the U.S. has terminated the sanctions waiver that had enabled India to import limited quantities of Iranian crude till last month. The Generalised System of Preferences scheme has been withdrawn, adversely impacting about 12% of India’s exports to the U.S., as a sign of growing impatience with India’s inability to address the U.S.’s concerns regarding market access, tariff lines and recent changes in the e-commerce policy.

A third looming issue, perhaps the most critical, is the threat of sanctions under the Countering American Adversaries Through Sanctions Act (CAATSA), were India to proceed with the purchase of the S-400 air and missile defence system from Russia. Till the end of last year, then U.S. Defence Secretary James Mattis had been confident of India securing a waiver — but times have changed.

Other potential tricky issues could relate to whether Huawei, which is currently the prime target in the U.S.-China technology war, is allowed to participate in the 5G trials (telecom) in India. The reconciliation talks between the U.S. and the Taliban as the U.S. negotiates its exit from Afghanistan raise New Delhi’s apprehensions about the Taliban’s return, constituting another potential irritant.

How New Delhi manages its relations with Washington will be closely watched in Beijing and Moscow, which have been moving closer. It is reminiscent of 1971 when China began moving closer to the U.S. to balance the then USSR, with which its relationship was strained. Today, both see merit in a common front against the U.S., though for China the rivalry with the U.S. is all-encompassing because of its geography and Taiwan. Russia has interests beyond, in Afghanistan, West and Central Asia and Europe, and it is here that Mr. Modi will need to exploit new opportunities to reshape the relationship.

In a post-ideology age of promiscuity with rivalries unfolding around us, the harsh reality is that India lacks the ability to shape events around it on account of resource limitations. These require domestic decisions in terms of expanding the foreign policy establishment though having a seasoned professional at the top does help. We need to ensure far more coordination among the different ministries and agencies than has been the case so far. Our record in implementation projects is patchy at best and needs urgent attention. The focus on the neighbourhood is certainly desirable, for only if we can shape events here can we look beyond. However, the fact that China too is part of the neighbourhood compounds Mr. Modi’s foreign policy challenges in his second term. Employing external balancing to create a conducive regional environment is a new game that will also require building a new consensus at home.