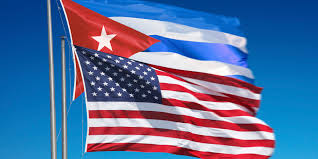 For many, the Cold War was over, well, in 1990 with the fall of the Soviet Union. But the U.S. president Barack Obama announced it in Panama this April 11, Saturday, after what he called a ‘historic meeting’ between him and his Cuban counterpart Raul Castro, saying, “Cuba is not a threat to the United States. The Cold War is over.”

The two leaders were talking to each other after six decades, which were marked by hostility, economic sanctions against Cuba, and the flow of Cuban refugees to the United States. In Panama, both leaders were attending a summit of the leaders from across the Americas.

Under Raul Castro, the younger brother of the Cuban revolutionary icon and fifty-year president Fidel Castro, Cuba has taken a path of market reforms within the Communist system to meet the gap of drying financial aid.

The US and Cuba had agreed in December last year to normalize situations, raising hopes of restoring diplomatic ties between the two countries severed since 1961.

Following the agreement, the US relaxed certain restrictions on trade and travel while the economic sanctions still remain effective.

This meeting has recevied a welcome across the world as an ultimate step to end the Cold War remains.  This step is expected to go down in the pages of US history as a major foreign policy achievement of President Obama.