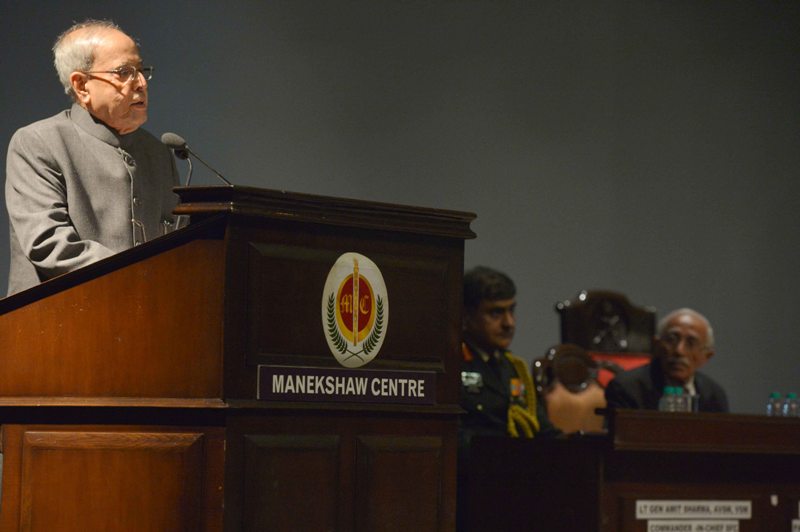 1.I am pleased to be here this evening to deliver the Cavalry Memorial Lecture organized by the Cavalry Officers’ Association. This organization of serving and retired officers of the Indian Armoured Corps conducts this Lecture annually to pay tribute to a decorated soldier of the Corps.

2.It is my privilege to deliver the Lecture this year in honour of Major D.S. Narag, the first recipient of the Maha Vir Chakra in the 1971 War for Bangladesh liberation. I take this opportunity to pay my homage to Major Narag and other Indian soldiers who laid down their lives in the War. Major Narag made the supreme sacrifice for the nation in the battle of Garibpur. In this Memorial Lecture, I have been asked to share my perceptions about the formation of Bangladesh. Let me begin with an explanation.

3.As you would appreciate, perceptions always tend to be subjective, more so in history. What happened in 1971 is recorded in contemporary history.

4.In the long history of world diplomacy, relations between countries have seen many ups and downs. Europe was the arena for two World Wars and the major European powers fought battles with each other for centuries. However, in the second half of the previous century, they imbibed lessons from history and decided to work together. They created a common market and a common currency. They created a European Union and a European Parliament. One of the most important inventions which have changed the world is the Internet, which is a product of the peace dividend in Europe.

5.Similarly, seven nations of South Asia came together at the initiative of Bangladesh on December 8, 1985 to establish the South Asian Association for Regional Cooperation (SAARC) in order to deepen regional cooperation and integration for peace and prosperity. In the last thirty years, we have created many mechanisms and institutions on the model of the European Union. It is however widely accepted that the full potential of SAARC is yet to be realized. As I have often said, we can change our friends but not our neighbours. It is for us to decide if we want to live in a state of perpetual tension or develop together in an atmosphere of peace and harmony. We must look at a shared future leaving behind the divisions of the past.

6.India-Bangladesh relations is a good example of progress in looking at a shared future.Our relations today are the best ever since 1974. They are based on mutual benefit, equality and respect for sovereignty.India attaches the highest importance to bilateral relations with Bangladesh. We have always believed that strong, stable and prosperous neighbours are in our interest.India and Bangladesh are not just neighbours. We are two nations bound by the threads of history, religion, culture, language and kinship. Our growing cooperation is a picture of shared prosperity amongst neighbours. With Bangladesh, we now need to recapture the spirit of the Liberation War of 1971 to build a new future.

7.Bangladesh has in recent times achieved tremendous success in every walk of life. Bangladesh is today a thriving democracy. From being ‘basket case’ in 1971, it is now self-sufficient in food grains. Its food grains output is around 34 million tonnes. Its growth rate has been over 6 percent in last 15 years. Bangladesh’s foreign exchange reserves are around USD 24 billion, which is the second largest in South Asia. Bangladesh has pioneered a social revolution with significant achievements in women’s empowerment, child health care, women’s health care and immunization. Like India, it is a young country with more than 50 percent of population below 24 years. Once again like us, Bangladesh is focused on developing the ICT and Services Sector.

8.Issues of concern between the two countries have been mutually resolved. For instance, a bilateral treaty signed on 12 December 1996 established an arrangement for sharing of the Ganges’ water.Prime Minister Narendra Modi paid a very successful visit to Bangladesh on June 6-7, 2015. A large number of agreements were signed on the occasion including the Land Boundary Agreement.This agreement on exchange of enclaves this year has finally put to rest the long-pending land boundary issue with Bangladesh.We also settled the maritime boundary last year.

9.India has granted duty free and quota free access to Bangladesh on all but 25 items. Indo-Bangladesh trade at over 7 billion US Dollars makes Bangladesh our second largest trading partner in South Asia. Power supply from India to Bangladesh, which commenced in October 2013, is expected to grow from 500 MW to 1100 MW within two years.

10.Connectivity is the catalyst for deeper engagement. We have launched three bus services that will connect our citizens more easily. I firmly believe that connectivity by road, rail, rivers, sea, transmission lines, petroleum pipelines and digital links must increase. Regional connectivity and cooperation between Bangladesh, Bhutan, India and Nepal must also be deepened. We have worked out mutually beneficial arrangements allowing movement of goods from Bangladesh through India to Nepal and Bhutan and from mainland India through Bangladesh to India’s North-east. These are significant steps forward which have been enabled by the close cooperation and frequent interaction of senior leaders of the two countries.

11.India-Bangladesh security cooperation is growing with three agreements having been concluded recently on human trafficking, fake currency, maritime co-operation and co-operation between our Coast Guards.

12.We are focusing on improving border management and coordination to prevent illegal activities, trafficking and movements.

13.India remains fully committed to partner Bangladesh in its economic development. Regular exchanges and wide dialogue between our two peoples are important to enhance our mutual understanding and goodwill.

14. We must move towards greater economic integration. South Asia should become an integrated market. A seamless assembly line as well as regional value chains for global markets should be created. Indian and Bangladesh businessmen are already collaborating in fields such as readymade garments, textiles, leather and pharmaceuticals. There exists huge potential for doing same in food processing, light engineering goods, ship building and auto components.

15. Indian investments in Bangladesh will help to create jobs and upgrade technology. These will make Bangladesh economy more competitive and increase exports. It is for this reason that the two Governments have agreed to cooperate to set up an Indian Special Economic Zone in Bangladesh. This is another big step forward towards restoring historic connections between our business communities, which will serve both well.

16. Bangladesh and India must come together as large consumers to develop and purchase cheap and clean energy. There is huge untapped potential to develop renewable energy like solar and wind.

17.As our economies get more integrated and our people better connected, our nations will become more prosperous. It will also open new economic doors for India’s Northeast. It will enable our two countries to integrate South Asia and connect it with the dynamic East.

18.I am confident India-Bangladesh relations will always remain special and unique in the annals of South Asian history. I pay tribute once again to Major D.S. Narag and all other Indian soldiers who distinguished themselves through bravery and sacrifices in the 1971 War of Bangladesh Liberation.

19.I pay tribute to Bangabandhu Sheikh Mujibur Rahman, one of the most outstanding leaders that this world has seen. His leadership and sacrifices gave birth to Bangladesh. Today, his daughter Prime Minister Sheikh Hasina is leading Bangladesh to greater and greater heights of glory.

20.The stage is now set for a quantum jump in our relations. I am confident the coming days will see a significant intensification of co-operation to eradicate poverty, enhance growth, promote trade and investment as well as fight the forces of terrorism, extremism and fundamentalism.

21.I thank you for giving me the opportunity to deliver this Memorial Lecture and reflect on a topic close to my heart. I wish you Godspeed in your endeavours.