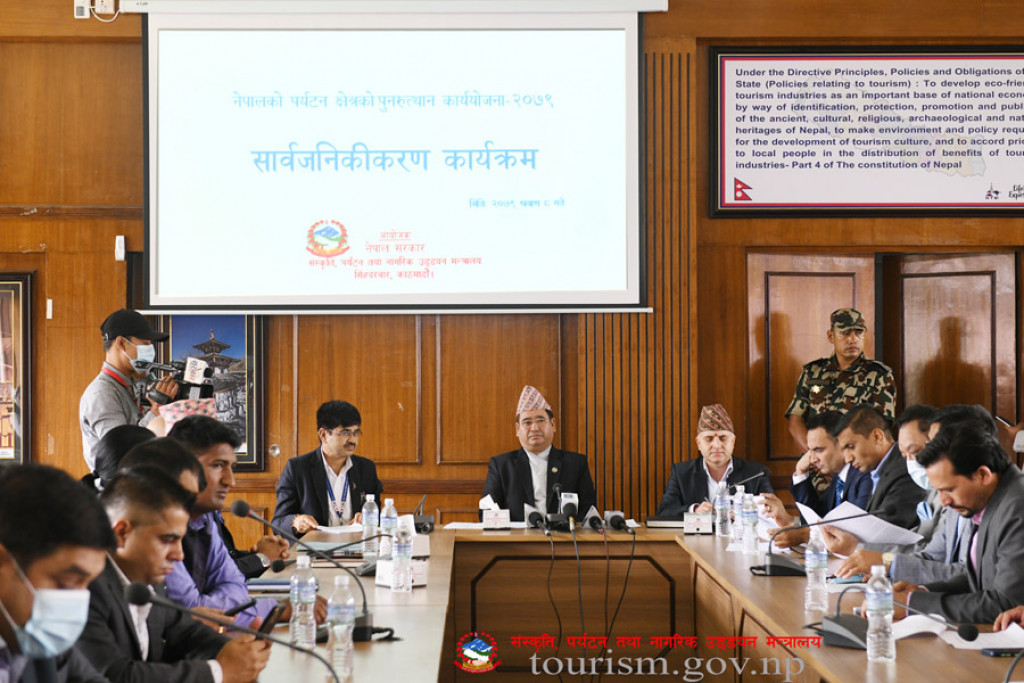 KATHMANDU, RSS – The government has prepared the ‘Nepal tourism decade (2023-2032) strategic action plan’ as part of the revival of tourism sector.

The action plan has set a target to bring in 3.5 million foreign tourists till 2032 in the country as well as creating employments to one million more people in the tourism sector during the decade. At a programme organised at the Ministry of Culture, Tourism and Civil Aviation to brief about plan, Tourism Minister Jeevan Ram Shrestha said the concept of tourism decade was brought for the revival of tourism sector which has been adversely affected by COVID pandemic.

He expressed the belief that the action plan would help establish Nepal in the front of world tourism market. It has been targeted to ensure the arrival of tourists as that of 2019 and increasing tourists arrival by 15 per cent every year, added Minister Shrestha. The government has also set the goal to make tourism sectors’ contribution in country’s gross domestic product to 10 per cent. As per the action plan, province and national-level campaigns would be launched for tourism promotion across the country by making institutional strengthening, upgrading of infrastructures, investment and tourism promotion, diversification and revival of tourism.

The Tourism Minister further shared that they would move ahead by establishing a smooth coordination among three-level governments for effective implementation of tourism decade action plan. It is necessary to move ahead by developing infrastructures and creating tourism-friendly environment to meet the target, he underscored. As per the strategic plan, a thematic campaign of cultural heritage of Bagmati Province will be launched in 2024, while Gandaki Province will be in focus in 2025 and a nationwide campaign in 2026.

Similarly, Buddhist tourism will be promoted in 2027, Madhesh tourism in 2028, and Sudurpaschim tourism in 2028. The tourism promotion will focus Province No 1 in 2030 and Karnali Province in 2031. Ultimately, in 2033, a nationwide tourism promotion will be enforced. On Thursday, the Tourism Minister was submitted a report by a taskforce formed to prepare the roadmap of the strategic work plan. A five-member team was formed under the coordination of tourism expert Prachanda Man Shrestha to prepare the roadmap.