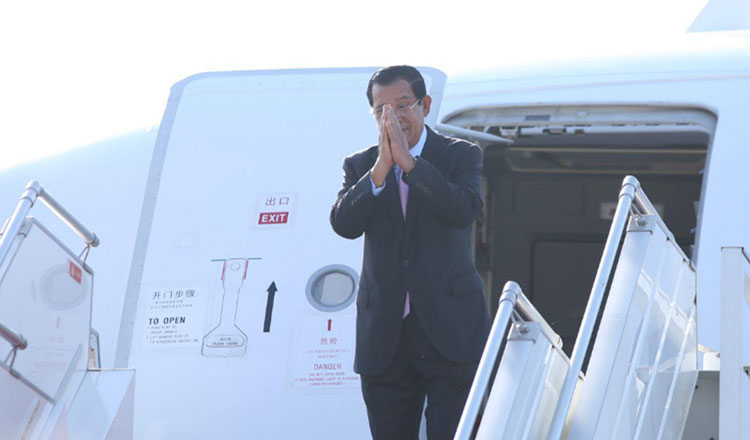 Nepal Foreign Affairs (27 November 2018) – Prime Minister Hun Sen will on Thursday visit Nepal, where he will attend the Asia-Pacific Summit in Kathmandu and lead a delegation during meetings with counterparts.

The Cambodian delegation consists of Foreign Affairs Minister Prak Sokhonn, other government officials and members of the Cambodian Chamber of Commerce.

During the visit, Mr Hun Sen is expected to attend this year’s Asia-Pacific Summit in the Nepalese capital of Kathmandu.

Both Prime Ministers will preside over a number of signing ceremonies to expand bilateral cooperation.

Mr Hun Sen will make an address during the Asia-Pacific Summit on Addressing the Critical Challenges of Our Time: Interdependence, Mutual Prosperity and Universal Values.

The summit will be attended by heads of states, lawmakers, businessmen and members of civil society.

Summit attendees will discuss climate change, development, good governance, conflict resolution, as well as look for ways to strengthen marriage and family institutions, in accordance with the United Nation’s 2030 agenda on sustainable development.

Mr Hun Sen will also visit Nepal’s Patan Durbar Square, which is a Unesco World Heritage Site, in the city of Lalitpur.

The visit will end on December 3.

The visit to Nepal comes after Mr Sokhonn visited Vietnam yesterday and today, when he met with Vietnamese Prime Minister Nguven Xuan Phuc to discuss bilateral cooperation on various issues of common interest to both countries.

The Foreign Affairs Ministry said his visit to Vietnam was aimed at further advancing relations and strengthening the spirit of solidarity between Cambodia and Vietnam.