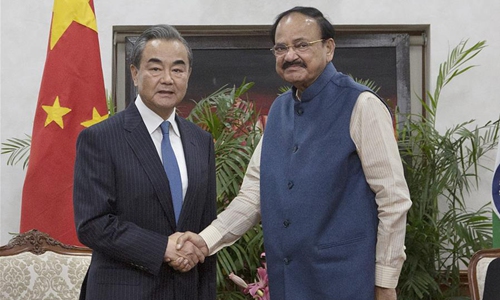 Xinhua (22 December 2019) – India and China pledged here Saturday to work together to push forward the development of bilateral ties to a new level.

While meeting with visiting Chinese State Councilor and Foreign Minister Wang Yi, Indian Vice President Venkaiah Naidu said that India is willing to take the 70th anniversary of establishment of the diplomatic relations between India and China next year as an opportunity to advance bilateral ties to a new level.

Naidu, also Chairman of Rajya Sabha (the upper house of parliament), hoped that the two sides will work together to strengthen high-level exchanges, deepen pragmatic cooperation, enhance cultural and people to people exchanges, and jointly safeguard the regional and world peace and stability.

The Indian vice president noted that leaders of both countries have reached important consensus on properly handling differences and sensitive issues so as not to allow differences to escalate into disputes.

Naidu congratulated Wang Yi on the positive progress made during the 22nd Special Representatives’ Meeting on the China-India Boundary Question held earlier on Saturday.

For his part, Wang Yi said that the leaders of the two countries, during their second successful informal meeting in Chennai, India, charted the direction for the development of bilateral relations and reached important consensus on the proper settlement of border issues.

Wang said that the special representatives’ meeting aimed to implement the consensus between the leaders of the two countries, sort out the important fields for cooperation and map out the development of bilateral relations next year.

In accordance with the political guiding principles on the Sino-Indian border issues, China has put forward a practical framework on solving the border issues, which has attracted the attention of the Indian side, Wang said, adding that the two sides have also reached consensus on confidence building measures and cooperation in border areas.

The China-Indian bilateral relations are facing new opportunities for development as the two countries will celebrate the 70th anniversary of establishment of the diplomatic ties next year, said Wang.

Noting that the two sides have announced 70 activities to mark the 70th anniversary of establishment of the diplomatic ties next year, Wang said the next step is to take the opportunity to deepen mutually beneficial cooperation, enhance cultural exchanges and consolidate the social and public foundations of friendship between the two countries.