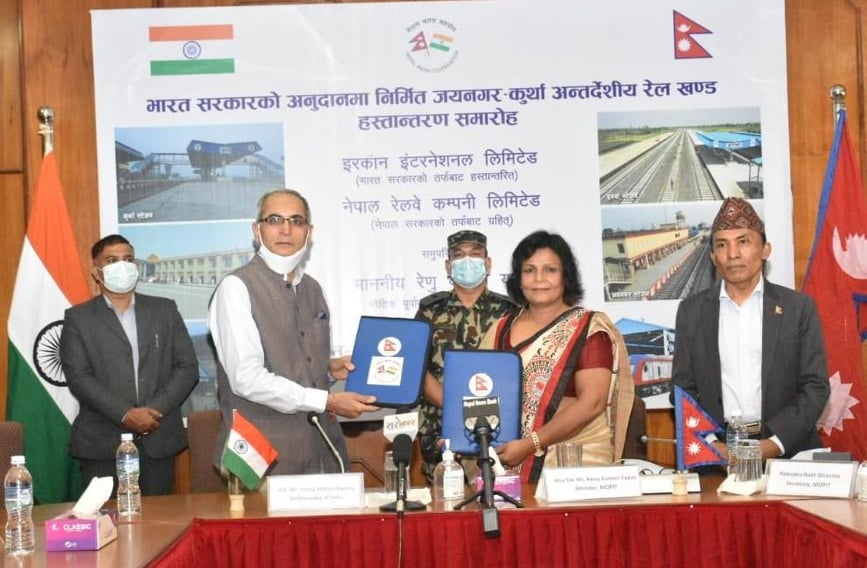 NFA (KATHMANDU, 22 October 2021) – India handed over the Jaynagar-Kurtha cross-border rail link, built with Government of India assistance, to the Government of Nepal today.
Ambassador of India to Nepal Vinay Mohan Kwatra and Minister for Physical Infrastructure and Transport Renu Kumari Yadav witnessed the occasion. The executing agency for the project, IRCON International Ltd (on behalf of Government of India) handed over the assets of the section to Nepal Railway Company Limited (on behalf of Government of Nepal) during the event.
Under the grant assistance of Government of India, the gauge conversion of 34.9 kms narrow gauge section into broad gauge, from Jaynagar in India to Kurtha in Nepal, has now been completed.  The 34.9 km Jaynagar-Kurtha section is part of 68.72 km Jaynagar-Bijalpura-Bardibas rail link being built under Government of India grant assistance of NPR 8.77 billion. This section was earlier a narrow gauge rail link between Jayanagar and Bijalpura. There are total 8 stations and halts on the Jaynagar-Kurtha section, which include the historically important city of Janakpur, reads the press release issued by the embassy.
Once operationalized, this would be the first broad gauge cross-border rail link between India and Nepal, and would further boost trade and commerce activities as well as people to people linkages between the two countries.  Cross-border rail linkages are an important facet of India-Nepal Development cooperation, which include Jaynagar-Bijalpura-Bardibas rail link and Jogbani-Biratnagar (18.6 km) rail link, both being constructed under Government of India grant assistance.