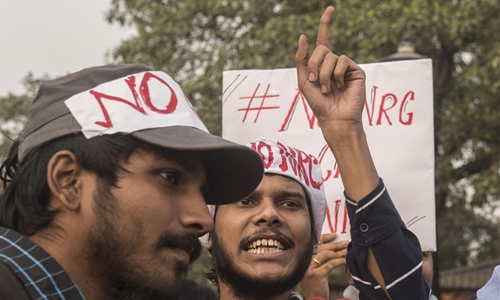 By Ai Jun (Global Times, 25 December 2019) – Kashmir, a long time contentious region, is now going through a new round of escalating tension.

According to reports, Pakistan claimed that India has lately been deploying medium-range missiles in the disputed region. A Pakistani army chief said there would “never be a compromise” on the Kashmir issue on Monday. The remark came after India’s army chief claimed “the Army is maintaining a high level of operational readiness” along the Line of Control on December 18.

Analysts say Indian authorities’ recent moves in Kashmir are an attempt to divert public attention from the growing domestic chaos triggered by the Parliament of India’s nod to the Citizenship Amendment Act (CAA).

The passing of the act is not an isolated case. In August, New Delhi withdrew the autonomous status of the disputed territory of Kashmir and split the state in two, with an aim of changing the demographics of Kashmir from Muslim majority to minority and integrating it fully into India. Only a few months later, the act showed once again that Indian Prime Minister Narendra Modi is forging a nationalist society centered on Hindus. Kashmir, where over 90 percent of inhabitants are Muslims, has thus turned into a tinderbox waiting for a match.

Kashmir has long been a flashpoint in Asia. Any accidental move might cause regional turbulence. Beijing, which also has territorial disputes with New Delhi over the region, is without doubt concerned about the situation there.

China has reiterated that the disputes in the region are “left over from history and should be resolved properly and peacefully in accordance with the UN Charter, relevant Security Council resolutions and bilateral agreements.”

People tend to use a stability-instability paradox to analyze India-Pakistan ties. According to the paradox, when two countries both have nuclear weapons, the probability of a direct war between them is low, but the probability of minor or indirect conflicts increases.

Yet the theory is found in recent years to be not rigorous. Some scholars believe that a nuclear weapon could easily be used by India or Pakistan. This is also what the Pakistan Prime Minister warned the UN about in September: a nuclear war could break out over Kashmir.

The international community should attach more importance to addressing the tensions in Kashmir. Divergences between India and Pakistan should be resolved through negotiations rather than violence. Both sides are supposed to have learned this from their history. Launching a war would bring unimaginable destruction to a development and cause humanitarian crisis.

As New Delhi and Islamabad proactively develop their economies, they should shift their focus to the long-standing puzzles in their countries and the region, such as poverty and terrorism.

It is time for India and Pakistan to take one step further in building their mutual trust. Only when they realize common development can they alleviate hostility toward one another. Collaboration under the framework of the China-proposed Belt and Road Initiative might be considered as a beginning.