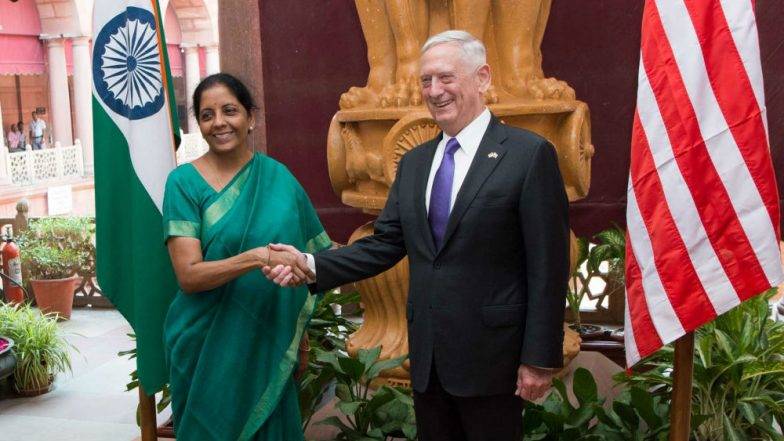 By By Liu Zongyi (Global Times, 11 September 2018) –  The twice-postponed two plus two ministerial dialogue between the US and India took place on September 6 in New Delhi, during which US Secretary of State Mike Pompeo and Defense Secretary James Mattis held talks with their Indian counterparts – External Affairs Minister Sushma Swaraj and Defense Minister Nirmala Sitharaman, over a string of issues including bilateral security cooperation, US sanctions against Iran and India’s purchase of Russian air defense missiles.

Before the dialogue, many analysts thought the US demand to halt India’s oil imports from Iran and India’s purchase of Russian S-400 air defense system, especially the latter, would hinder the progress of the US-India strategic defense partnership. Unexpectedly, Washington made concessions on these issues. An important step forward, the US and India signed the Communications Compatibility and Security Agreement (COMCASA), and agreed to hold joint exercises involving the air force, navy and the army off the eastern Indian coast in 2019. The dialogue yielded a satisfactory result for India.

The US-India two plus two ministerial dialogue has a symbolic significance. It indicates the building of the strategic security cooperation mechanism between the two countries has continuously strengthened and gradually approached the level between the US and its allies such as Japan and Australia.

Although the dialogue was postponed twice due to personnel reshuffle in the US Department of State and some other issues in bilateral relations, that it was finally held demonstrates the urgent needs of both sides in deepening strategic defense cooperation. The Logistics Support Agreement, COMCASA, and Basic Exchange and Cooperation Agreement for Geo-spatial Cooperation are the three basic agreements that the US signs to form military alliances with other countries. Now only the third has yet to be signed between the US and India.

The two plus two ministerial dialogue mechanism has long been established between the US and its regional allies such as Japan and Australia. With the establishment of the one between the US and India, it’s expected the Japan-India and Australia-India strategic cooperation mechanism will be further upgraded. If so, the formation of a quadrilateral security dialogue comprising the US, Japan, Australia and India is not far away.

One of the main reasons for the formation of the US-India two plus two ministerial dialogue and the inking of the COMCASA is to counterbalance, even contain, China’s rise. The US hopes to form military alliances to confront China and exclude it from the process of globalization as it did with the Soviet Union.

As seen in the interactions between India and the US, there have been more and more convergences between India’s China strategy and the US’ Indo-Pacific strategy. India views China as the main threat to its rise. It not only aims to counterbalance and contain China with help of US strength, but also wants to overtake China. Therefore, enhancing strategic defense partnership with the US is India’s established strategy. As Indian External Affairs Minister Sushma Swaraj said during her meeting with Pompeo, “India attaches the highest priority to its strategic partnership with the US. We see that the US is our partner of choice.”

The past few months have seen a rapprochement in Sino-Indian relations and sound interactions between the two. Chinese Defense Minister Wei Fenghe concluded his India visit just several days before the US-India two plus two dialogue. But from the Indian side, this is just a tactical adjustment rather than a strategic one.

After the China-India Doklam standoff, India has been trapped in an awkward situation – relations with China and other neighboring countries deteriorated; moving closer to the US didn’t exempt it from tariffs imposed by the Trump administration but led to an alienated India-Russia relationship. The diplomatic quagmire undoubtedly would negatively affect Indian Prime Minister Narendra Modi’s election next year. In such context, Modi recalibrated his diplomatic policy, holding an informal meeting with Chinese President Xi Jinping in Wuhan and Russian President Vladimir Putin in Sochi respectively, and keeping a distance with the US at the Shangri-La dialogue. This won India diplomatic maneuvering room and prompted the US to make concessions over a series of issues in the US-India bilateral relations. India is playing games to gain benefits from all sides – China, Russia and the US.