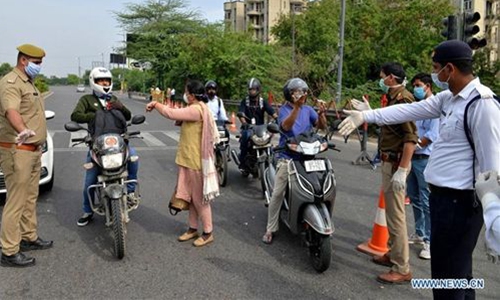 By Global Times (25 March 2020) – India on Tuesday announced a 21-day national lockdown in a bid to contain the spread of the coronavirus pandemic, in stark contrast to the slow responses in some Western countries. Since the virus spread seems to be still in its initial stage in India, with 519 confirmed cases as of Tuesday, the decisive move by the Modi government is commendable.

That being said, it is difficult to judge whether the lockdown is too early or too late, given the Indian government’s unwillingness to conduct widespread testing. With a population of 1.3 billion, India has reportedly conducted 15,000 tests, which is nowhere near sufficient to understand the true extent of the outbreak. South Korea with a population of 52 million has reportedly conducted over 300,000 tests.

An economically costly lockdown may help India buy time, but it won’t be enough to prevent the virus from spreading. In addition to a complete lockdown, a more active plan to fight the virus is still needed in India.

For starters, the South Asian country should take a more aggressive approach to detecting out who has been infected with the virus. Identifying infections is always the first step to containing the spread. Countries like China, South Korea and Singapore which have succeeded in flattening the infection rate curve have all conducted large-scale testing. And if India is short on testing kits, China will always be willing to offer help.

If certain states lack sufficient testing kits in the short term, chest scans appeared effective in Wuhan and could be used to diagnose the coronavirus.

Next, India should make worst-case scenario plans. Hospitals and other medical resources can easily be overwhelmed when there is an outbreak. It will take time for authorities to prepare medical equipment, makeshift hospitals and quarantine locations for those who test positive and their close contacts, so relevant preparations should be made in advance.

A long-term national lockdown comes at great economic and social cost, and is not just difficult for a government but also its people, particularly the poor. Thus, in addition to ensuring essential daily supplies, the Modi government should figure out how to support the country’s poorest to weather the upcoming economic winter, both during and after the lockdown.

Finally, India should work together with its neighboring countries like China to fight the coronavirus.

With its lessons learned during the outbreak, China has shared and is willing to further share its virus prevention and diagnostic experience with neighboring countries. India should make fighting the virus its top priority. Any dispute appears trivial when faced with the devastating impact of the coronavirus.