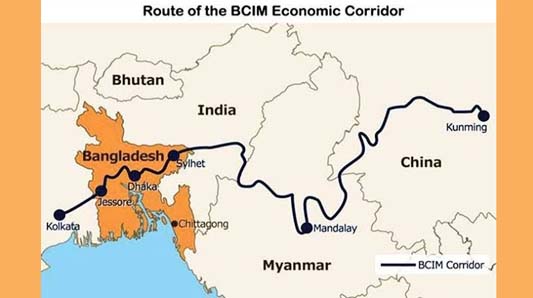 By Hu Weijia (Global Times, 8 July 2019) – China and Bangladesh have agreed to advance cooperation on the Belt and Road Initiative (BRI), but in order to reach its full potential in the region, it will need support from New Delhi.

Bangladesh’s geographical location is attractive to investors. The country holds an important geopolitical position along the BRI, making it a springboard to Indian markets. Last week, Bangladeshi Prime Minister Sheikh Hasina paid an official visit to Beijing, reaffirming the country’s intent to push forward the BRI and the Bangladesh-China-India-Myanmar economic corridor.

China would like a closer relationship with Bangladesh. The Times of India said Friday that China is “taking a lead” in the economic corridor by extending a $31 billion funding package for infrastructure development in Bangladesh.

China’s promotion of the initiative in the region is not meant to dilute New Delhi’s influence on Bangladesh. China will never pursue leadership in the region, on the contrary, China hopes India can play a more important role in developing the economic corridor.

Those who underestimate the importance of India in the region might think China’s growing presence in South Asia allows Beijing to ignore New Delhi as it pushes forward the BRI in the region. But in this globalized time, no bilateral relationship is exclusive. China values its relationship with India while the nation develops ties with Bangladesh. India has wide clout in South Asia. The development of the BRI needs New Delhi’s support if the initiative is to run smoothly in South Asia.

South Asia cannot build a prosperous economy in the absence of India. Chinese companies are now helping build Bangladesh’s roads, bridges and power stations. Those investments will be more effective if India promotes infrastructure cooperation with Bangladesh to build an interconnected network in Asia. We hope New Delhi can actively participate in the Bangladesh-China-India-Myanmar economic corridor. China does not really care about whether India will steal the limelight from itself over issues related the economic corridor.