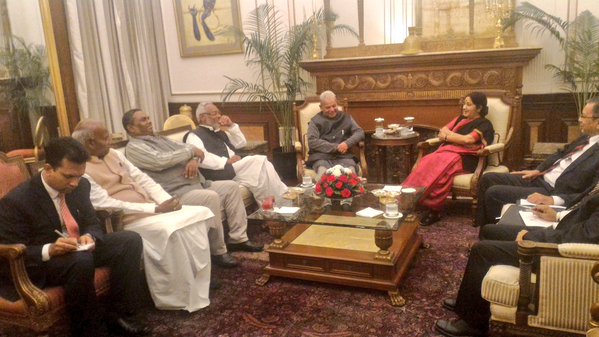 Nepal Foreign Affairs (Kathmandu, December 6) —India has indicated that it will be continuing crippling economic blockade in Nepal unless an amendment on new Constitution is made to address demands raised by the agitating Madhesi parties.

During a meeting with the Madhesi Morcha leaders in New Delhi, on Sunday evening, Indian External Affairs Minister Sushma Swaraj made it clear that India will keep exerting pressure on the Nepal’s ruling parties to ensure the rights of Indian-origin Madhesis.

“Minister Swaraj called for broad-based ownership of Constitution and also encouraged speedy political solution and return to normalcy on that basis,” Spokesperson at the Indian External Affairs Minister Vikas Swarup tweeted following a one-hour meeting with the visiting Madhesi leaders.

The spokesman’s tweet has made it clear that the Indian government will lift the economic blockade only after the Nepal’s Parliament approves the much-touted constitution amendment bill as demanded by the Madhesi parties.

According to the spokesperson, the Indian external affairs minister also reaffirmed support for an inclusive Nepal.

On the occasion, the Madhesi leaders said that they will continue the border protests till their 11-point demand are fulfilled.

The Madhesi Morcha leaders, who have reached Delhi on Sunday, claimed that they are on an official visit to India to explain the Indian leadership of their concerns after launching an agitation in Terai some three months ago. Indian Ambassador to Nepal Ranjit Rae accompanied in all meetings with Madhesi leaders.